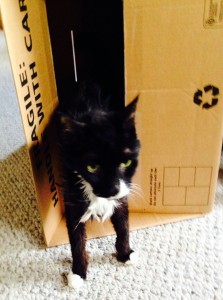 2014 was not an easy year over on Lucile Street. My cat Zappa died March 30. Meredith’s beloved Tupelo died on October 17 and Mer was entrusted to care for a neighbor’s elderly cat over the holidays. I bet you can guess what’s coming. In one way it’s a good sign that another being entrusts you with their transition to cat heaven, or next cat incarnation, or wherever your cat cosmology tells you they go after tripping us in the kitchen, covering our black clothing items in hair and urinating on our beds when we’ve been away too long. Cats also provide a whole genre of American Sentences, usually involving vomiting or their rear ends, or both. When there is little or no emotional attachment between the cat care-giver and the deliverer of bad news, it can open up some possibilities for dark humor, especially if you were raised in the Upper Midwest, as both Meredith and I were. So when Mer got the bad news on January 3, I was sympathetic, but also ready with pen and pocket journal to write down what the vet said about how to deliver the news to our dear neighbor. Never is it an easy task, but to do it with some tact is important, as community is built in moments like these, and perhaps deconstructed in this case with this past week’s top American Sentence.