Make It True (Poetry From Cascadia) 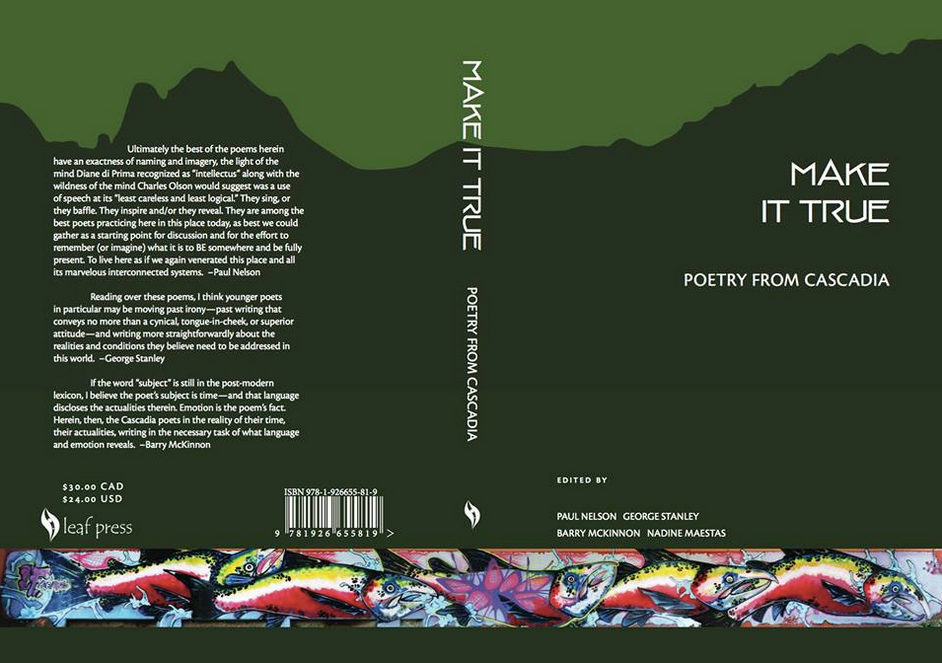 It is still kind of hard to believe that the second of the Cascadia poetry projects I envisioned a couple of years ago is just about to manifest. Make It True: Poetry From Cascadia will be released on May 1, 2015, at the 3rd Cascadia Poetry Festival.

Published by Ursula Vaira’s Leaf Press, the anthology features 89 poets from the Cascadia bioregion, and I edited the book with George Stanley, Barry McKinnon and Nadine Maestas. The launch is Friday night, May 1st, at 7:30 pm at Vancouver Island University (Bldg 355, Rm 203). (A Gold Pass for the fest remains incredibly cheap at $25.)

The cover, Table of Contents and my Introduction are posted now on the Leaf Press website: https://leafpress.ca/Make_It_True/Make_It_True.htm. The anthology, along with the festival itself are two thirds of projects related to the cultural investigation I envisioned a few years ago and are now manifesting in ways I could not have envisioned. The co-editors all added their input and Ursula Vaira’s contribution to the content, helping clarify and strengthen the introductory essay, getting the poets to approve their proofs and assembly of the whole book in a record amount of time is nothing short of stunning. To all the people involved in this project, I express my deepest gratitude.

And this anthology is assembled with the assumption that it is the poetry outsiders who are forward-looking and have the best chance at deepening that cultural animation. The marginalized (for whatever reason) poets are the harshest critics of conventional wisdom in culture and in bioregional poetry culture; the best of them also serve the poet’s traditional function as prophet. This book’s organizing principles of what is open and outside, with subsets of what is experimental and challenging, are related to George Stanley’s proposition stated at the second Cascadia Poetry Festival in May 2014 in Seattle: that contemporary poetry faces the tyranny of the ironic; so making it new again means responding to the cultural situation in 2015, similar to the way Modernists responded to theirs circa 1912 and the Postmodernists in 1960 with the New American Poetry, and going deeper than the ironic. From the earlier Modernist push (and Ezra Pound) we get our title, slightly paraphrased, Make It True. As a person of Cuban descent, I also resonate with poet José Lezama Lima’s notion that “only the difficult is stimulating,” but difficulty is not easy to communicate and that which appears simple on the surface may have depths a quick reading or two may not reveal.

The 89 poets represent a wide range of poetry, from Open Form to Language Poetry-influenced, Conceptual to Dharma Eco-Poetics (as Trevor Carolan would have it), several members of the seminal TISH movement and a fair geographical representation, though not what we had hoped for. Innovative is a word not in favor at this time, but open and risk-taking are, and there is much of those two aspects of poetry from this bioregion. Just to have this book out is an accomplishment I am delighted to have achieved. That one of the poets did not live to see his work in it, Peter Culley, is one of the saddest developments associated with the effort. I hope you’ll consider attending the launch at the Fest in Nanaimo May 1, buy a copy or just borrow it from your local library. I also hope this book serves as an opening to a deeper understanding of Cascadia and the emerging culture here. 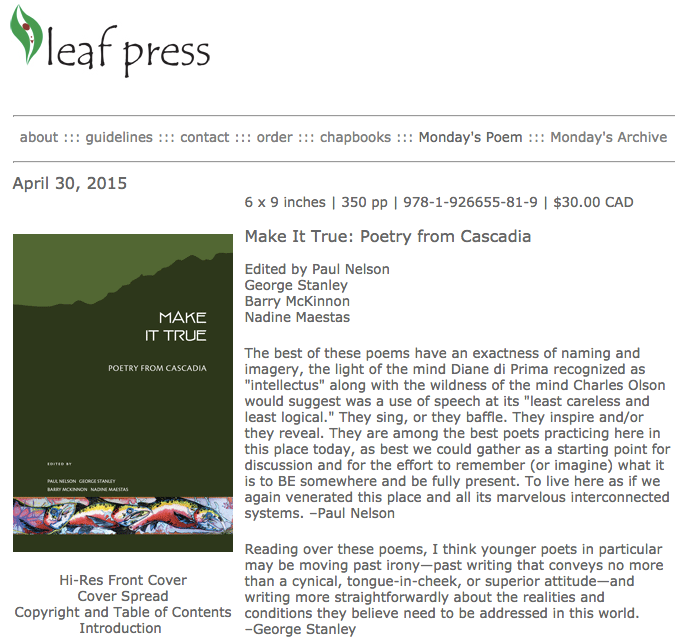 2 Responses to Make It True (Poetry From Cascadia)