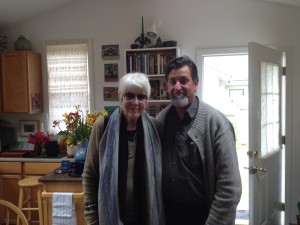 One of the major women poets of the SF Renaissance, Joanne Kyger was born in 1934 in Vallejo, CA, studied with Pound scholar Hugh Kenner at UC Santa Barbara and moved to San Francisco in 1957, where she became a member of the circle of poets around Jack Spicer and Robert Duncan. In 1960, she and then-husband Gary Snyder traveled in Japan and India where, along with Allen Ginsberg and Peter Orlovsky and met the Dalai Lama. She returned to California in 1964 and published her first book, The Tapestry and the Web, in 1965. In 1969, she settled in Bolinas, where she continues to reside today. Kyger is author of over 30 books of poetry and prose, the latest of which is poetry: On Time (City Lights). She’s a two time guest of SPLAB for readings in Auburn in 1998 and Seattle in 2014 and we stopped by her house on Memorial Day, before the last leg of our recent road trip, to talk about the new book and have her read a couple of poems.

Jake Marmer, in a perceptive review of On Time in the Chicago Tribune, writes:

Kyger’s project, however, is a great deal more ambitious than mere writing of a personal journal. She’s creating a contemporary history, fusing private and public, personal and national in ways that add up to a formidable alternative to more traditional models of historical narration. As the poet rages about the country’s political direction and environmental woes, she envelops her commentary with a peculiar mix of Zen teachings and noir-tinged humor.

And so our time with Joanne, after pleasantries and more coffee, started with a really wonderful poem that rightly skewers devotees of Jesu Christo.  (Click text of poem to hear audio.) 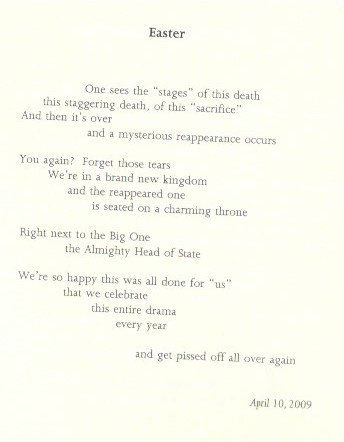 I am reminded of a recent article published on the Salon website by Daniel Silliman entitled: Christian fundamentalism is a capitalist construct: The secret history of American religion (The origins of modern evangelicalism can all be traced back to the founder of Quaker Oats.) It doesn’t take a Buddhist or a Beat poet to realize something in USAmerican Christianity has gone a little off the tracks, but to have this annual event broken down so cleanly, with such great wit and humor is part of the delight of Kyger’s poetry.

Our conversation continued with a reading of some of the poem Seventy-Seven Beautiful and Adorable Things for Arthur Okamura’s 77th Birthday. Among the lines are:

43. and jump from a standing position onto the bar at Smiley’s
44. and play the saxophone under almost any conditions
45. including when the saxophone is made of sea kelp
46. and play a game of cribbage
47. and make heavenly barbecued pork
48. and carve radishes into roses…

That the book is dedicated to the memory of Okamura, whom she calls: Artist, Teacher, Friend, is important, as is the fact that his last oil painting is featured on the cover of the book, though she laments the color is not reproduced there perfectly. She read from that poem which starts off as a typical list poem but then numbers intrude on sentences and the poem’s rhythm takes on a life of its own.

She would also discuss how she creates her unique line breaks and her debt to Sei Shonagon, a “court lady” in ancient Japan (966-1017 or 1025 C.E.) whose lists include a litany of gossip, poetry, perceptions and complaints and who has become a favorite workshop subject for Joanne over the years.

Finally there is the poem: I’m Very Busy now So I Can’t Answer All Those Questions About Beat Women Poets, which she read and is scanned in below. 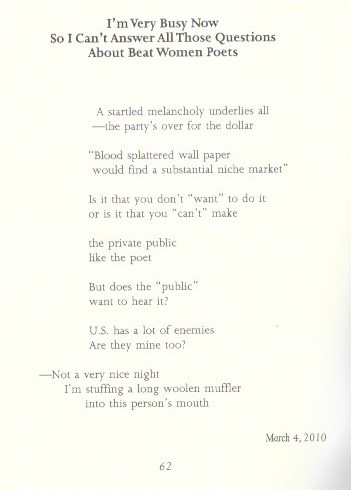 Bolinas is an old hippie town famous for tearing down the State Highway signs that point the way there in an effort to keep people away. CDOT finally gave up, but now we have GPS devices which can get us to Bolinas, if not to Joanne’s garden compound where she has lived for over thirty years and is always a delight to visit.