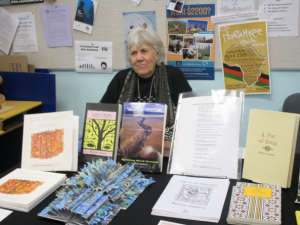 Marilyn Stablien is a Portland poet and book artist. She has lived in New York, New Mexico, the Himalayas, Seattle and is included in Make It True: Poetry From Cascadia. We sat down in her dining room on Friday, June 26, 2015 to discuss her work as a literary activist, performance artist, poet and the death of her son.

In segment one she discussed her literary arts background in Seattle, having a hand in founding Seattle Arts & Lectures, organizing the Bumbershoot Literary Arts program and writing book reviews for the Seattle Times. She also discussed her Master’s Thesis done for the University of Houston entitled: “The Journey to Ice” and her “Ice Performance” at Bumbershoot, as well as running a Literary Arts Center. Part One 8:14.

In segment two she discussed her move to New York, her work with people like Dick Higgins (Fluxus), her Dia de los Muertos-inspired performance Bardo Passages: Soul Journey to Tibet and opening a bookstore and then an adjoining nightclub at the behest of musician friends like Joe Giardullo featuring artists like Dewey Redman. She read the poem Live from the Uptown. Part Two 6:30.

In part three she gave her thoughts about Cascadia, about the “dynamic energy living at the edge of the continent, on the Pacific Rim” and the influence of Asia. She credits “part of her education” to growing up in California and listening to Alan Watts on KPFA and watching Japanese cultural programming on TV, which introduced her to brush painting and haiku. She recalled being on the beach on Alki (Seattle) with her kids and “seeing this plume” which turned out to be the eruption of Mt. St. Helens. She also talked about her attraction to mountains and the water abundant here. She discussed why she called the Far West a “region of intimidation.” Part 3, 8:23.

In part four she discussed how she’s fascinated about the “details of destruction.” She discussed the beauty in recognizing the impermanence of things and how her visits to the Himalayas helped instill an appreciation for impermanence in her. She read from her book Climate of Extremes. Part 4 – 8:13.

In segment five she responded to a question about acceptance and if her travels in Asia and her appreciation of impermanence helped her deal with the tragic death of her son. She read the poem What Rises, written after her son Willie’s death. Part 5 – 5:28.

In the final segment she discussed her creative writing studies, including the University of Washington, studying with Jim Welch, Leslie Silko, Al Young, William Matthews and Stanley Plumly among others. She mentioned Jane Hirschfield, Billy Collins, Emily Dickinson and Mary Oliver as inspirations. She also talked about her new collection of poems, a memoir and new fiction she’s working on. She also talked about her thoughts on Cascadia and the cultural investigation through poetry. Part 6 – 8:30.