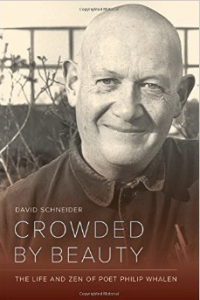 Thanks to Sam Hamill’s suggestion, I have been reading Crowded by Beauty a biography of Beat Poet and Zen Monk Philip Whalen by David Schneider. Am loving it and finding it a great companion and inspiration for the 9th annual August Poetry Postcard Fest.

The Tibetan concept of Namthar or “spiritual biography” is designed to tell the story of a wise person on different levels: outer, inner and secret. These are said to correspond roughly to body, speech and mind. Schneider, an ordained Zen priest since 1977 says:

Body clearly means the body, but it extends as well to anything connected to form: the literal stuff of a person’s life. Speech comprises all the acts of communication, including how someone talks, which language, how loud, their gestures, manner of dress, attention to grooming and how they move. Mind concerns itself with a person’s education, faith, prejudices, perspectives and conceptual habits, or the absence of these.

I’m reminded again of how Barry McKinnon pointed out W.C. Williams’ dictum that each poem must sum up the poet’s life to that point. The postcards sure do that for me. And that one writes the poem onto the card (in most cases) is an example of engaging the body more viscerally in a practice that can become disembodied. Surely speech and mind are also engaged, even if it is the silent speech of the mind’s transcription onto the card. I find this endlessly fascinating. The above quotes from the book on Whalen are seven pages in.

1 Response to Whalen, Zen and Postcards