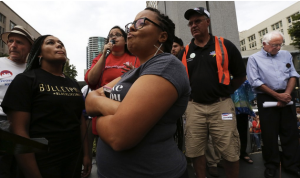 Yes the 8.8.15 interrupt Bernie stunt “Blew up the Internet.” Of course that does not make it good, that means someone got their picture in the paper and in news stories for a cycle or two. Never mind that the 1% got that much richer while the “Left” “debated the manners” (and then the efficacy) of said stunt by alleged #BlackLivesMatter protestors, or felt that the inherent racism of White progressives was exposed, or that one of the protestors was found to be a former supporter of Sarah Palin and a self-described “devout evangelical Christian.”

Can you imagine someone who supported Sarah Palin interrupting an elder like Bernie Sanders and demanding he relinquish the stage to her so she can demand his apology and push his campaign to the Left? (This is our world today folks.) “I see you’ve found religion, Kid” is how he could have responded. He had more class.

But this is the effect. Sanders later that evening unveiled Symone Sanders, who “serves as the national youth chair of the Coalition on Juvenile Justice, a nonprofit that focuses on appropriate care of American youth in the justice system.” She introduced Sanders at the evening reading on August 8, the one not interrupted and given to 15,000 people, and will serve as his national press secretary. Sanders listens. Remember that. Here is more evidence.

The stunt, and a different reaction from a Brother in my spiritual community, led me to think of how said community might grow and be more diverse. (We’d be happy if we lowered the average age to something below 66!) And that also led me to see just how misogynistic is one poetry community I’ve affiliated with for a couple of years, with one poet reading a poem from his life in the 70s that referred to women as “bitches” and the house band covering Honky Tonk Women, an old Rolling Stones song that relates their encounter with a prostitute. Objectify much? 1970, maybe. 2015, really? 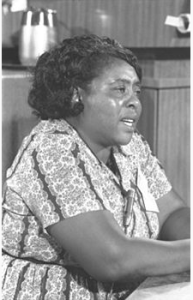 But what could the protestors have done better? Not calling the gathered White Supremacists, for one. Also, watch the video of the encounter and you can see the vitriol of the protestors. You can see why some of the, mostly white Sandernistas took offense, not to excuse the reactions, some of them quite ugly, but hate begets hate and is antithetical to unity and we need everyone at the table to restore Democracy to what has become an oligarchy. Ask Fanny Lou Hamer about how to build a movement. It’s got to be clean. As Miles would say: “Cleaner than a broke dick dog.” (I was made aware of her by this brilliant take on the Bernus Interruptus.) Or Charles Mudede in The Stranger. Bad politics indeed.

So I am thinking about a plan of real action for the large group of people who are predisposed to support the #BLM cause and a few others related to the competition/domination model that keeps many people down and is poised to consume the biosphere.

A 5 Step Plan for Seattle Progressives?

1) Install a Civilian Review Board for the Seattle Police Department. This is a #BLM priority, so let’s make it #1 and let’s lead the country on this issue like we did the $15 an hour minimum wage. I mean if the U.S. Justice Department finds: “that SPD has engaged in a pattern or practice of excessive force that violates the Constitution and federal law” you’d think that a CRB at this time is a realistic possibility. If not now?

2) Demand Inclusionary Housing. When the city’s own developer-laden committee says: “a housing affordability crisis unlike any Seattle has experienced since the Second World War” you know the situation is real. And all the developers need is time to make this San Francisco 2.0 and kick every last poor person and artist to Renton, Bremerton or Slaughter. (I tried that last one and it does not work.) If housing does not affect everyone, what does? And the poor and People of Color are already being displaced at record levels. Look at the Central District, which was for decades a thriving African-American neighborhood. No more. Whites are the majority.

3) More Artist Housing. I would like to see an artist housing complex like the ones Art Space creates, in every Seattle neighborhood that wants one. (Am guessing Madison Park and Laurelhurst would pass. Rainier Beach could take two.) Look at how artists reshape a community and make sure the tech Yuppies and Amholes don’t move in in 5 or 10 years. 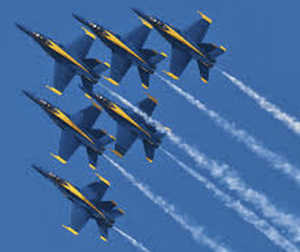 Blue Angels (How’s THAT for doublespeak?)

5) While we’re on the subject of militarism, how about Equal Time (& Resources) for Peace Groups in all Seattle Schools? Why should the militarists get a free ride? For every dollar they spend coming into schools, we should demand an equal amount to go to bone fide peace groups that have been at it for a while like the American Friends Service Committee, for example.

These came to mind during a short walk and I am sure there are about 20 more I could come up with given more time, but it’s a good starting place and action without vision and intent is like, in the words of one Black Sandernista, “pissing on your friends.” Sure Bernie can handle a little piss, but a man with his vision deserves a little champagne, though I am willing to wait until November 2016 for that moment.

See also this wise editorial, which backs up some of my points.