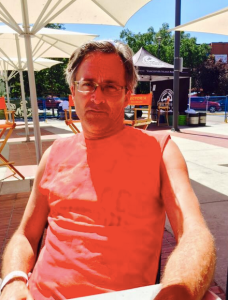 Greg (GP) Lainsbury, Professor in the English department at Northern Lights College, Fort St. John, BC is another of the poets with work published in Make It True: Poetry From Cascadia. On July 29, 2015, stopped by the SPLAB Lucile complex (during Seafair of all possible moments) to share some work and answer a couple of questions about Cascadia. He was doing what he called a “transit” of Cascadia with his partner Kara-lee MacDonald. He read from Half-Life, part of a serial poem he’s composing, about how Barry McKinnon opened him up to the possibility of the serial poem and Versions of North, the part of the poem which preceded Half-Life. He talked about how his poetry reveals his poetics and about his Texlahoma project