Autumn came in with a bang yesterday, three weeks early. (Damage is said to be in the tens of millions of dollars.) It’s odd, but early Spring and early Summer this year were greeted with great joy. Early Fall? Ugh. Truth is many around here loved the early rain because of all the wildfires this state has been suffering, but we could have done without the 60 mph winds: 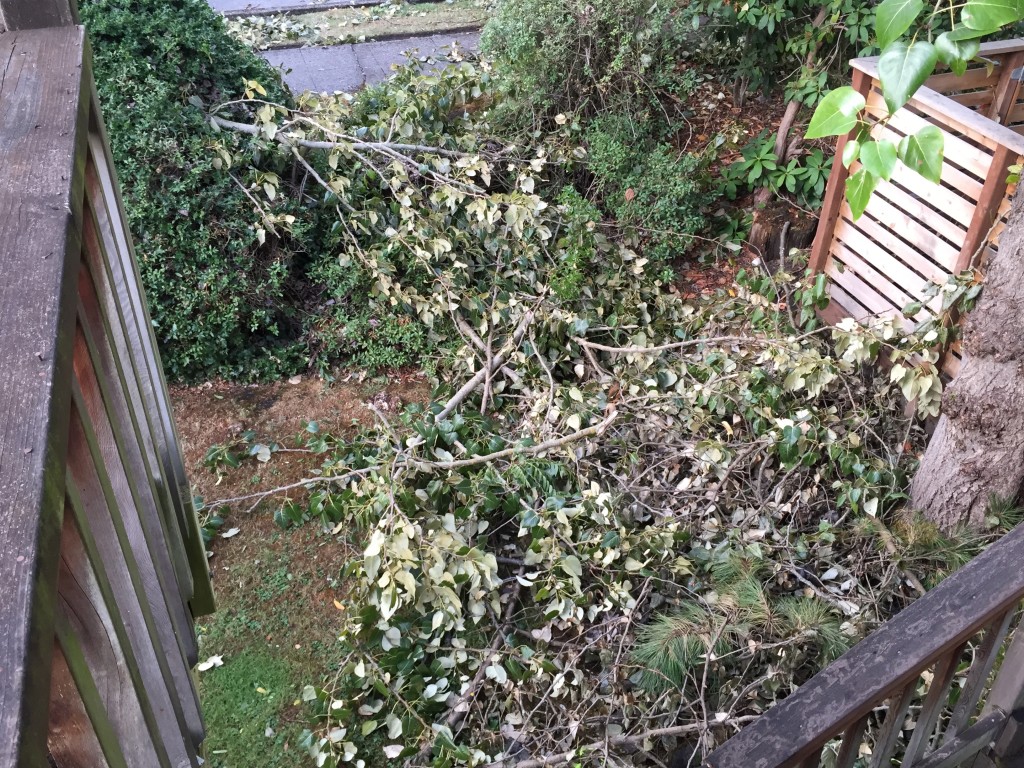 Taken from my porch.

And I have not yet stopped sending out postcards, but have posted a couple (as it has been over a month since they were sent) and am quite ready to post the rest, but will give them ample time to reach their destinations. And there is a sense of urgency here based on the cards and the tone of the cards I’m getting lately. I am starting to get my “thank you” postcards which are sweet, one alluding to the early APPF 2015 kvetching. I do reserve the right to write a more extensive account of what I got in the mailbox in 2015, though that might get lost under the weight of the huge changes happening in my life. But here is a top 4 list of some postcard highlights in no particular order:

Here is one segment:

This year Paul suggested that we all write epistolary poems—poems written in the form of letters. I don’t know if that was the suggested form in years past; honestly, I tend to skip right over rules and suggestions about what to write in these things and do whatever the hell I want. But I got stuck for ideas early in the month, and those first few poems were painful. Then I thought, “Epistolary, hmm…,” and wrote “Dear _______” as a title, and a poem popped out very easily. Since then, I’ve structured almost all of the poems as letters. Most of them don’t have titles, only the “Dear _______” part. That proved to be very, very fertile ground. Intimacy again, I guess; the feeling of writing a missive to one person gives me less stage fright than trying to “write a poem,” and the month’s output has taken on the air of a dreamy conversation. And now I’ve got this odd little collection of letter-poems, many with river images from a recent rafting trip on the Rogue—dismantled dams, abandoned power stations, salmon leaping out of the dark waters, the lazy bends and chaotic, crushing rapids. The collection feels more cohesive, like more of a project unto themselves, than my August postcards usually feel. So my hat’s off to Paul for that suggestion.

I love these poems Judy makes via collage. They look cool, are the furthest thing from the poems which are all left-hand margin justified (referred to by Michael McClure as “Lawnmower Poems”) and have enough quirk to make them zing with surprise mind: 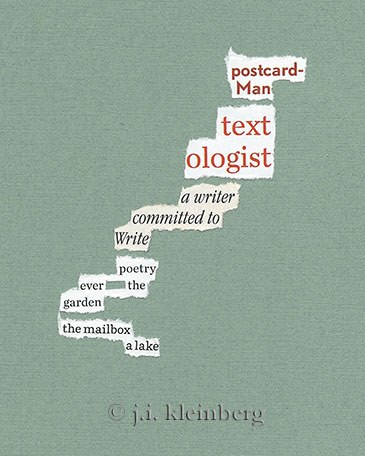 The card itself was a nice one, with an interesting graphic and wonderful (calligraphy-like) handwriting, but here is a real creative twist that I have seen a little bit of, from Linda Crosfield, among other postcarders. The stamps! Dig: 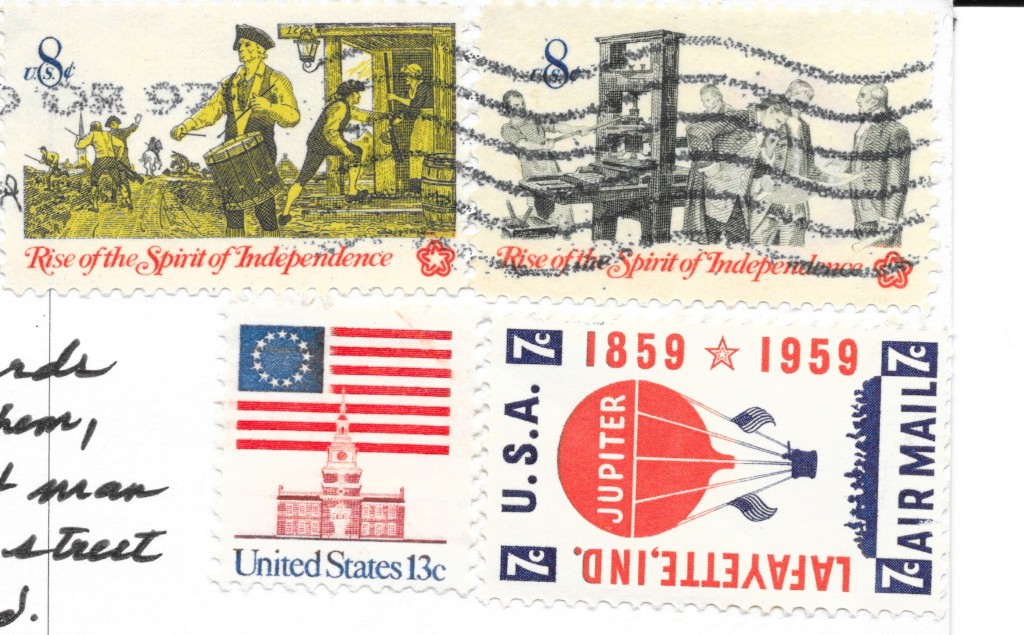 I got this and was able to translate the energy received into my take on birdspeak & onto the next card and unsuspecting postcarder. (Who will be revealed.) Who knows from where comes the energy of any poem? Postcards sometimes have trails and my Stellar Jay (Stellar’s Jay) poem can be tracked back to Art, but my own poem will have to wait until it has arrived safely to its new home. Meanwhile: 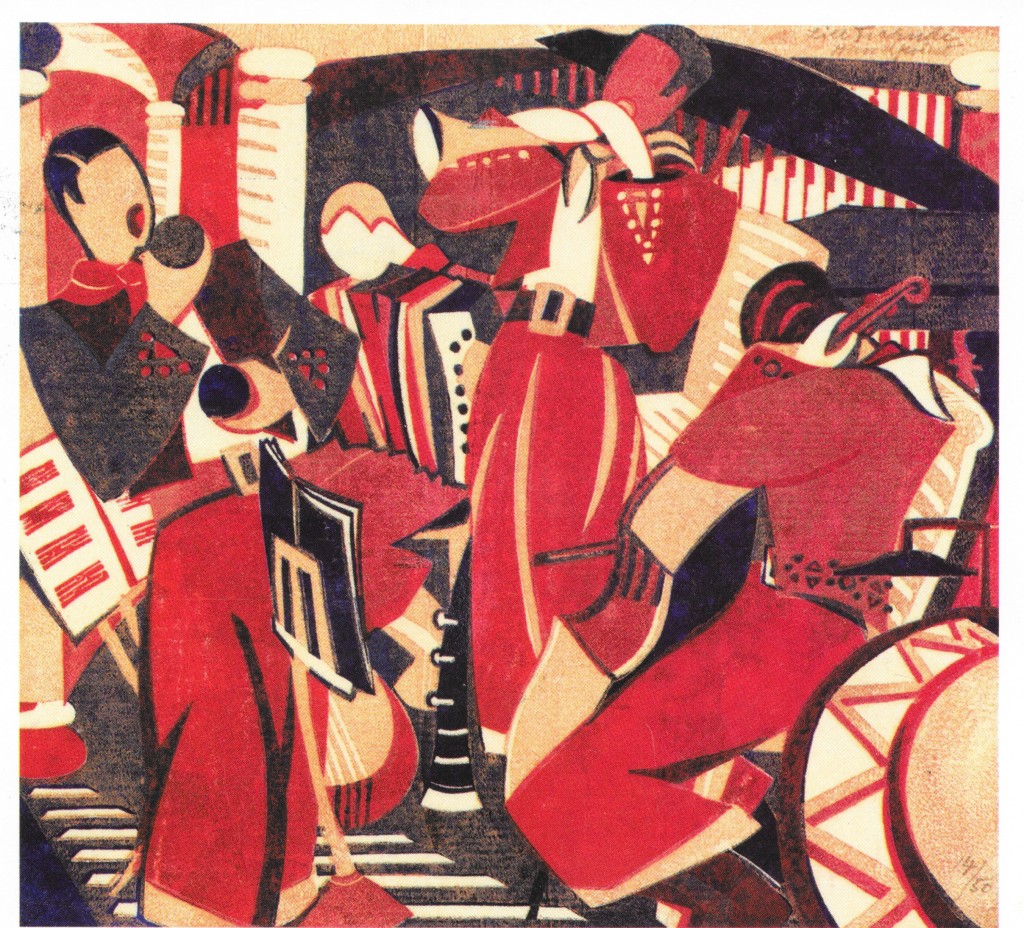 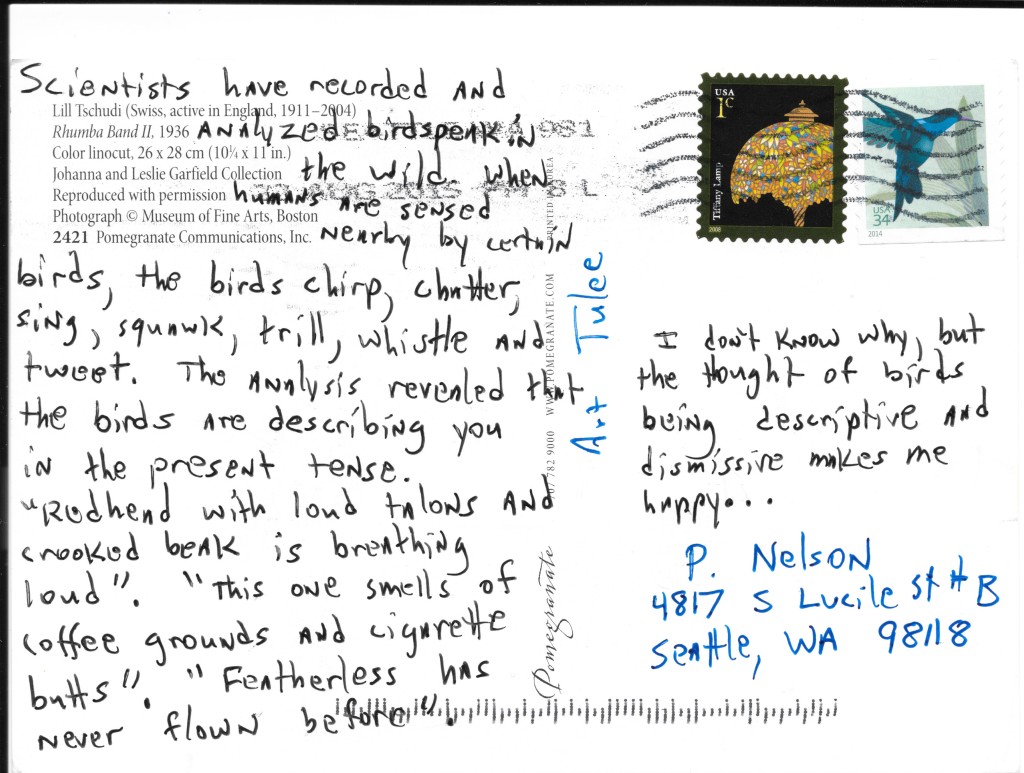 I am hoping to write my 2015 APPF Afterword this week. Thanks to all who participated this year. News on the APPF anthology will be coming before too long.