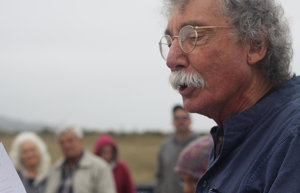 In September 2015 I had the chance to interview a poet and long-time bioregionalist Jerry Martien on the waterfront in Eureka, California. With Jim Dodge, he’s one of the two poets from extreme Southern Cascadia in the book Make It True: Poetry From Cascadia. I think you’ll find his thoughts prophetic and extremely useful at this time of whole-systems transition from capitalism and climate system collapse. Enjoy and thanks Jerry!

A Southern California native, in segment one he talks about how he abandoned academia and decided to “do nothing” in Humboldt County, thanks to a contact in the New Schools movement in the early 70s. (Then discussed what he did.) He also discussed a book he’s just finished (The Price of a Life) about the history of money, especially as relates to Humboldt County, from shells to gold to paper money to now, marijuana. Listen to Part One 7:47.

In the second segment he talked about how he believes Cascadia culture has an ethos of tying in economics in with ecology. He mentioned living in a watershed that was devastated by the “Junk-Bond Redwood King” Charles Hurwitz and that the debts created by policies carried out by the companies Hurwitz directed will take many decades, perhaps centuries to re-pay. He talked about the concept or reciprocity. He also mentioned that Jim Dodge was one of the people espousing a bioregional ethos in the 70s and took him to San Francisco to meet bioregional pioneer Peter Berg and that the Wiyot view was likely that the main business of human beings was restoring balance. Listen to Part Two 3:58. 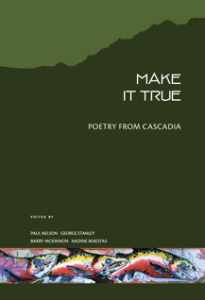 In the third part, Jerry Martien talked about the Make It True: Poetry From Cascadia anthology, how he is reading it daily and he read his poem: Now The Ice about a trip he took to Glacier National Park in 2010. Listen to Part Three 4:42.

In Part Four he described Cascadia culture as a place where libertarians and anarchists meet and then part company over economics. He also discussed the Occupy movement and how part of our problem in Cascadia is that we are all immigrants here. He also discussed some of the spirit of collectivism of this bioregion. Listen to Part Four 7:22.

In Part Five he responded to a question about Cascadia literature. He prefers poets that speak to the natural world and the place they live. He mentioned Elizabeth Herron, and how part of the job of poetry at this time is to help us deal with the loss of “things that are going” meaning the catastrophic loss of species. He prefers a poetry that is simple, direct and uses words that are used in every day conversation. Listen to Part Five 7:45.