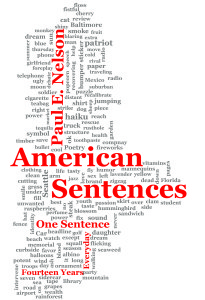 I get nervous sending out review copies of my new books. Fortunately, I took Sam Hamill’s advice from a few years ago to heart and am not in a rush to publish. At least I don’t think I am. But my  project was probably overdue for publication. And I have sent out several review copies and I am not sure if reviewers will get something close to the depth at which I think I am working.

Well, Greg Bem sure did and I am so pleased (& relieved.) See his review at the lively Queen Mob’s Teahouse here. Here are some of his opening thoughts:

“…a celebration of life and an introspection of life… American Sentences, is the latest iteration of this acknowledgment and remembrance of “verse” as beyond bland conception, beyond academic coldness, beyond 21st century disembodied robotism…”

That Greg and I have been friends since he moved to Seattle (was is 2010?) helps. Not to blow smoke up my ass, but to get a sense of what I am trying to do. Essentially (as Greg states in the review) it can be seen as a long poem in itself. I would say a serial poem and a documentation of a poet’s life in an age (& culture) that at best despises poets and at worst ignores them.

He even turns a criticism into a bit of perception when he states:

Nelson’s own book features a few blunders—sentences that come off as unchiseled, or missing the mark. These sentences—and there are only a few that I caught—rely in abstraction, play around a bit too obscurely with language, and don’t fit Nelson’s “usual” voice. But I wonder if Nelson was aware of the inclusion of some of these in the book. I wonder if Nelson was conscious that their difference provides support to the book and the form for the book as a whole. These several poems of tension and roughness, the sentences that don’t click or don’t vibe only counter those that do in harmony.

Which is true. I purposely was inclusive in my selection process, because some poems have a meaning that only a few people can grasp fully, but consider those a shout out to them in a way. In an interview setting, I could probably elaborate on the background of sentences people feel are weak and having more backstory might help, but it is not important. Also, in a reading setting, (with the couple of readings I have already done for the book) the background stories become just as interesting as the poems in many cases, a fact I really did not think about until readings in November and December. Thanks for the review Greg Bem. 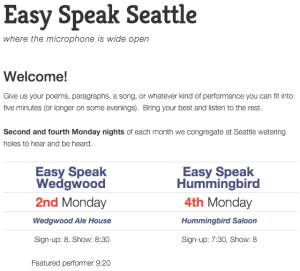 I read again February 8, 2016, at 8:30 at EasySpeak Wedgwood, my favorite current open mic and hope to see you there. Hopefully you will read too. I try to get there early, have a gyro and get ready for the show. early is 7:15. With a private room (albeit with two large pool tables in the middle) the setting is good for intimacy when the server is not talking during the poems. Not Kip, the other guy.

I will bring copies of the book for sale and I could sure use a few books sales right now. It only took me 14+ years to get this thing out. That’s less than a buck a year for you, dear reader.

One last note: On Wednesday (Jan 20) I’m part of Greg Bem’s latest brainstorm “Inumbrating Pinnacle” the at Sonic Bloom at Seattle Center. Showtime 9pm. This promises to be very interesting at least and Greg’s corralled a few other interesting folks. Click on the image for more.