This started out as a Facebook comment, but I have to document some of my thoughts on this day we find out David Bowie has died of liver cancer. (He died yesterday, January 10, 2016). I was the Music Director for WWCT in Peoria, Illinois, when I was invited to a pre-show meeting at the Rosemont Horizon outside of Chicago with a few other radio types and David Bowie. It was 1987’s Glass Spider tour and Peter Frampton was the guitarist for the band, and though the concert itself was unmemorable, meeting Bowie was something else. It was nothing more than a “nice to meet you,” a handshake and a lot of awe, as I was just out of college for four years in year seven of a 26 year radio career in which I got to meet a lot of rock stars and Jazz musicians. But there was a kindness emanating from him. A kindness that few rock stars had. I won’t mention names here, but could tell you stories.

And today as I woke up to check my cellphone for notifications, I saw all the “RIP David Bowie” Facebook status updates and, after getting over the notion that it might be a hoax, started to think about his passing. I read the links that a few friends provided and one of them was Bowie talking about Dylan and how Bowie understood Dylan to have an inner life, though those were not the words he used, nor can I find the source of that. And in my Facebook comment I noted:

I got on Spotify and picked a selection of my faves of his and, combined with something he said about Dylan, that you could tell he has a spiritual quest at the heart of his work as an artist, listened to Sound and Vision and it really hit me that Bowie had one as well. https://www.youtube.com/watch?v=WoDamvrfUbQ Then Rebel Rebel came up and how he was 40 years ahead of his time on the issue of transgender says a great deal about his consciousness. RIP.

And in the comments I would note the lyrics to Sound and Vision:

Blue, blue, electric blue
That’s the colour of my room
Where I will live
Blue, blue

Pale blinds drawn all day
Nothing to do, nothing to say
Blue, blue

Of course we supply much of the meaning to art we encounter, meaning that the artists may not necessarily have intended, but that strikes me today as someone recently dead, in the bardo awaiting the gifts that only humans are endowed with. Gifts we almost always take for granted. Not Bowie, however, and Facebook friends have commented that he was busy creating up to the end of his life. That’s the spirit in him, the thin slice of the Creator in the Thin White Duke. I have listened to the song at least 5 times today and its power is not ceasing yet. Dig the adjectives AllMusic.com uses for the tune: 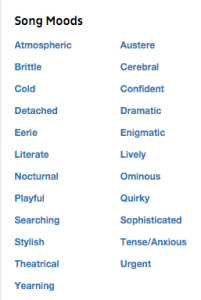 And reading Pat Metheny’s tribute on Facebook revealed his deep respect for Bowie as an artist and as someone who surrounds himself with the best musicians. Metheny noted Bowie’s appreciation of sax players and I am reminded of David Sanborn’s play on the Bowie tune Young Americans.

And it must be noted that Bowie was about 40 years ahead of the new awarenesses regarding gender. Dig some of the lyrics from his 1974 tune Rebel Rebel: 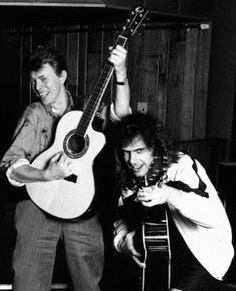 (I love Amalio Madueño’s variation on that in a poem where he wrote: “Hot TRIPE, I love you so.”)

So farewell David Bowie. Thanks for your nearly endless melodies, for your kindness and for your own gifts of sound and vision.