Another Salish Art card from the 2015 August Poetry Postcard Fest and one I’ve used before. We miss our cats, not that they would have been able to ward off attic rats. There is just something creepy about rats in the house and worse, in the attic. Like the feeling you’re going to prepare to decorate your Christmas tree, put the ladder up and have to wade through rat shit to get the plastic baby Jesus. Ugh. 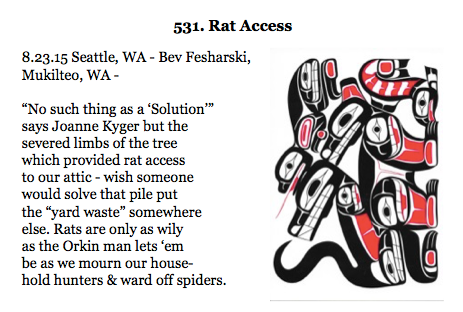 And can you imagine going to the mailbox, delighted to get a card and it’s about attic rats? Sometimes I think I should think more about these things, then I think again and love the life of the wide bandwidth, even if it costs me a friend now and then. Remind me to tell you the one about the cannibal joke at the Audubon center.