Hugo House Out, Whole Foods In

Seattle had the second or third highest rent increase of cities in the U.S. in 2015 depending on how you figure it. Regardless, the housing market here is insane. Is anything sacred? No. Across the street from Seattle First Baptist Church was a perfectly suitable brick office building housing dentists and other Pill Hill professionals. In new Seattle this is WAY too short and will become a 16 story tower with 800 or so apartments and a Whole Foods on the ground floor.

The Richard Hugo House literary center was the New City Theater and now will be a multi-story edifice with the Hugo House getting a new home in the new building. But, while memories of the old days at the house will linger in the minds of thousands of patrons and the sight lines will no doubt be improved, there’s something sad about the transition. If anything other than a sterile environment can be created there, it will be with a great deal of finesse. Here’s hoping. 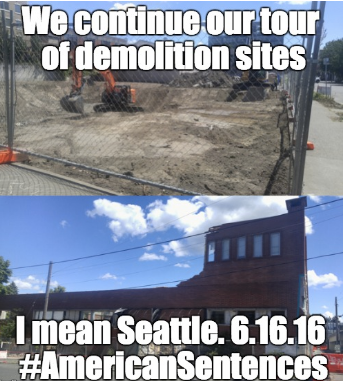