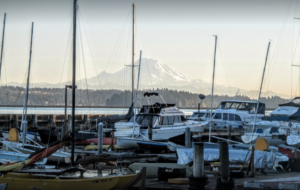 It was coming out of the canoe and walking up the path at the North Leschi Marina with my daughter Rebecca, as my partner Bhakti rowed on in her canoe on Lake Washington that it hit me.

The background is that I have a primal fear of being underwater. My daughter too, apparently, and carrying my fear AND hers was too much on this July day. Despite this, I have done kayaking, whitewater rafting the Rogue and canoeing at least two other times with Bhakti, the last of which we flipped the boat trying to get on the dock. That moment I was sure I was going to go under, unconvinced that the life vest was going to keep me afloat. It did. A passerby grabbed me by the shoulders and pulled me out of the water and said “you might want to take swimming lessons.” I told him that learning to swim was not the issue, since I had a primal fear of being underwater. He said: “well, you might want to go somewhere next time.” The next time I overturned the canoe, he meant.

The next time I went on the canoe was with Rebecca and was the shortest canoe ride ever. Yesterday I returned the hardly-used life vest I bought for her to REI to get my $76 back, but it was clear to me I had to note this experience of my feelings just after we got out of the canoe. I’ll explain.

I have lost several friends this political season. Social media + the awful choice we’ve been given and the chicanery on the Democratic side, including the fact that the Democratic National Committee was tilting the scales toward Hillary Clinton from the beginning, has taken its toll on everyone who cares about who leads this country. These are not healthy signs for democracy and it is what we have. On the Republican side we have proto-fascism, so good luck with that. The shadow never wins says one commentator and I believe him. I also understand more deeply about the situation when I read articles like the one George Lakoff wrote about Trump’s appeal to white evangelicals and pragmatic conservatives.

One of these lost friends is so afraid of a Trump presidency and used the “Bernie Bros” myth as an attempted put-down of me in response to an article about the rigged nature of the Democratic primary. My assertion that nothing good comes from such process that is not in integrity. As if I have no consideration for GLBTQIA+ people because I am somehow not vehemently opposed to the Republican standard-bearer. (I am.) I was called a “cis-gendered Bernie Bro.”

The “Bernie Bro” slur (one started by the Clinton campaign) was referred to by Glenn Greenwald as:

…an all-purpose, handy pro-Clinton smear that even consummate, actual “bros” for whom the term was originally coined — straight guys who act with entitlement and aggression, such as Paul Krugman — are now reflexively (and un-ironically) applying it to anyone who speaks ill of Hillary Clinton, even when they know nothing else about the people they’re smearing, including their gender, age, or sexual orientation.

But it’s ok in our culture to slur men, especially if they are perceived as “white.” Never mind my Mother was born in Cuba and my Father was a working-class union activist raised in poverty. Poverty so dire, he never forgot the relief agency worker’s comments, in the pre-welfare 30s, when his single-mother complained that the financial help they were getting was not enough to feed 5 people, that they should “water down the oatmeal.” He repeated that story to me in the year before he died. And my Dad’s New Deal Democratic values are something I’ll not sacrifice for anyone or anything. In fact, I think they should be a starting point for USAmerican society.

Back to the lake and the long walk up to the car with my daughter, taking off our life vests and turning our attention to where we were going to get coffee. It hit me that Queer people have the same primal fear walking to the very cafés we were considering, the grocery stores, the post offices &c &c. Any simple moment for someone like me and my daughter could become a potential hate-crime-beating-spot or murder. The fear of GLBTQIA+ people is the same as the fear my daughter and I share, that we’re not going to survive. It is primal. It can be paralyzing, as it is when I am floundering in the water two feet from the dock, unable to move that distance to save myself. So my empathy deepened on that day. I hope others can have similar experiences and that my experience with my daughter can lead to a deepening of current alliances and the creation of new ones, no matter the results of the next US Presidential election.

This ability to go beyond identity, slurs, &c, is critical for all people ESPECIALLY allies. I am committed to a movement that starts with respect, regardless of who is perceived to have privilege.