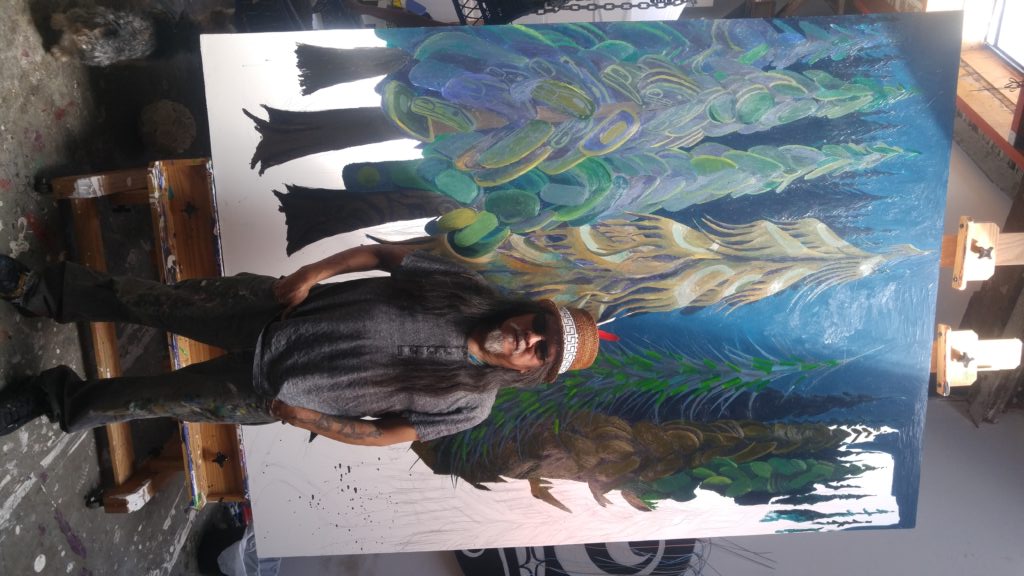 On August 6, 2016, I was honored to have a rare opportunity to interview Lawrence Paul Yuxweluptun, one of the most brilliant painters in Cascadia. His work is also the subject of Unceded Territories, a huge exhibit at the Museum of Anthropology at the University of British Columbia. The webpage for the exhibit says:

Unceded Territories promises colour and controversy through this display of over 60 of Yuxweluptun’s most significant paintings, drawings, and works in other media – a critical and impassioned melding of modernism, history, and Indigenous perspectives that records what the artist feels are the major issues facing Indigenous people today.

The exhibit is large, political to the tenth degree and inspiring. I first became aware of Yuxweluptun’s work when I got the book Challenging Traditions by Ian M. Thom. The subtitle is Contemporary First Nations Art of the West Coast and while there were a few artist’s whose work I was familiar, Susan Point and Robert Davidson among them, a painting by Yuxweluptun caught my attention: 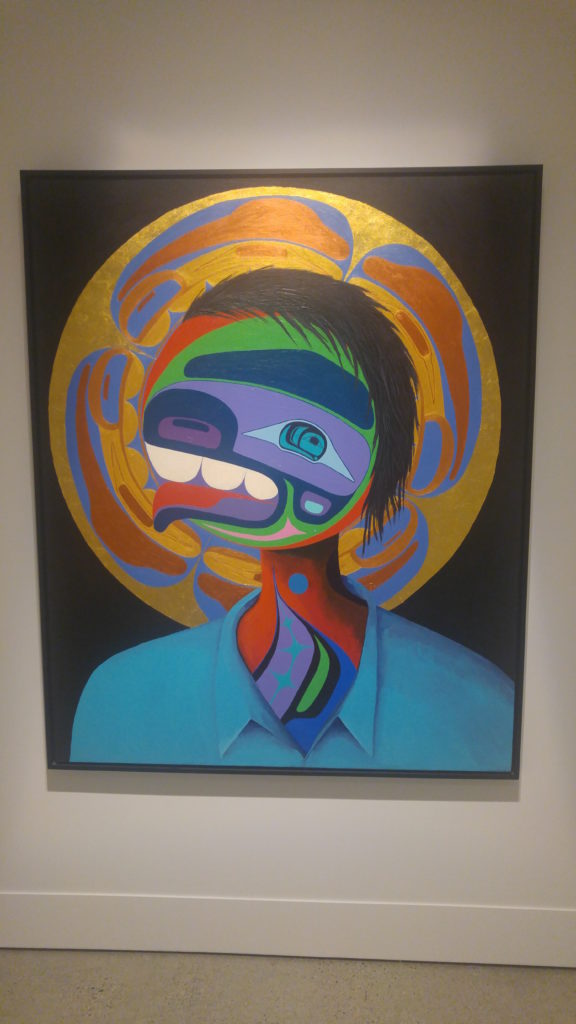 Portrait of a Residential Schoolchild, 2005

Here were the nods to Salish traditions, such as the ovoid (Yuxweluptun says he practices “ovoidism”) but also bold color and a surreal feel. There is a neo-surrealism” to much of his work which melds with his own aboriginal traditions which are quite beyond the scope of the typical settler’s industry-generated-cultural experience.

A giant piece taking up all of a large wall in the gallery put me into a state of latihan kejiwaan, the spiritual practice of the worldwide Subud community, of which I have been a member since 2004. I had a similar experience once before, looking at Bill Reid’s 1984 Mythic Messengers sculpture, which you can see at the Vancouver Gallery that bears his name. The Yuxweluptun piece is from 2016 and is called 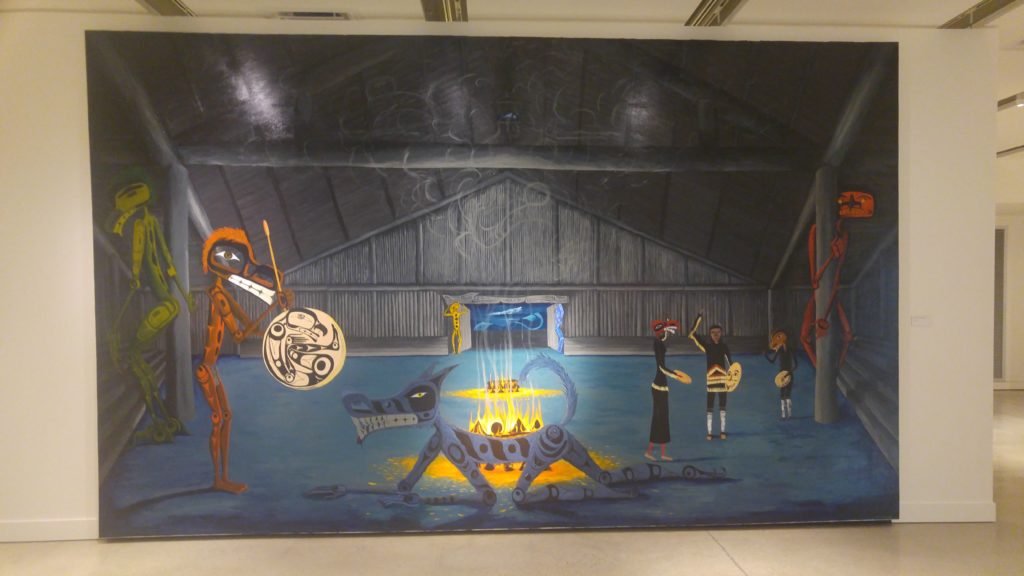 Spirit Dancer Dances Around the Fire (2016)

That HE is the spirit dancer in question might have something to do with the shivers I was getting, in a good way. He is authentic and for non-natives to get some sense of Northwest Coast spirituality, this painting is a blessing and can act as medicine.

I took many photos and was granted permission by Yuxweluptun to publish them here, but this post is about the interview and it went for sixty-five minutes. Yuxweluptun did not mince words. I am pretty sure he is incapable of doing that. I did not even need to do my planned introduction. We sat down and he started talking, but I would have said:

In June of 2014 the Vancouver city council unanimously voted to acknowledge that the city is on unceded Aboriginal territory. The motion from the city said:

Underlying all other truths spoken during the Year of Reconciliation is the truth that the modern city of Vancouver was founded on the traditional territories of the Musqueam, Squamish and Tsleil-Waututh First Nations and that these territories were never ceded through treaty, war or surrender…” The city said that it will work with representatives from the Aboriginal community to determine “appropriate protocols” for conducting city business.

Unceded Territories is the name of an exhibit at the University of British Columbia’s Museum of Anthropology featuring the work of Lawrence Paul Yuxweluptun, an internationally-known artist of Coast Salish and Cowichan descent. A graduate of the Emily Carr College of Art and Design, Yuxweluptun, who says he was “trained as a politician and became an artist” has over 60 pieces in the exhibition that feature bright color, neo-surrealism, Coastal Salish tropes such as the ovoid used in a new way, and a political content that is fierce but also features a vibrant sense of play. Lawrence, welcome. 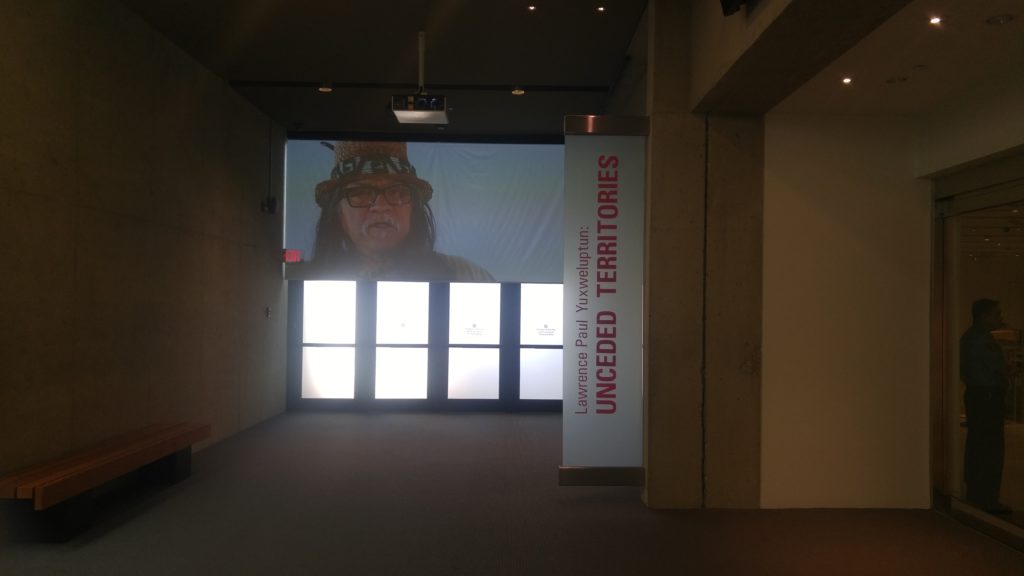 In the first segment he immediately talked about his displeasure with the status quo for indigenous artists and about the very name of the province in which he lives, British Columbia, which he called “a big piece of colonial bullshit.” He inferred the province’s name reflects the longest war in history, one that he says is still ongoing. Listen to Segment 1, 4:26. 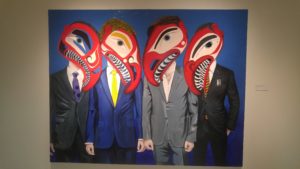 In segment two Yuxweluptun responded to a question about how he acquired his name, which translates to: “Man Who Wears Many Masks,” how he was initiated as a “Mask Dancer” and a more recent given name: “Man Who Possesses Many Colors.” He says “Lawrence Paul is his ‘government’ name.” He also responded to a question about how his parents were politically active and how that might have shaped his own very political stance by talking about Canada’s “Indian Act.” Listen to Part 2, 6:46. 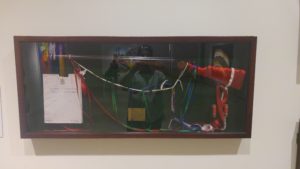 In segment three Yuxweluptun responded to the notion that the Vancouver City Council’s proclamation was extraordinary by saying it was essentially meaningless.  He also talked about shooting up a copy of Canada’s Indian Act and calling it “A Book Report.” He gave a long list of items he would gladly put a price on for colonialists, such as rainbows, water and earthquakes and also suggested he’d be fine with Canada’s dissolution. Listen to segment three, 6:54. 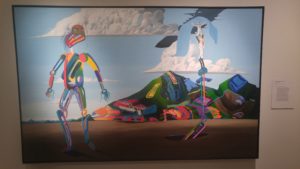 In  the fourth segment, Yuxweluptun responded to a question about how this current exhibit came about and he said that he has always considered the MoA “the cultural morgue of Canada.” He talked about how capitalism is failing the planet and referred to his painting Red Man Watching White Man Trying to Fix Hole in the Sky and how it is an example of how he records history. He also discussed how he uses what he calls “neo-surrealism” and how it gives him the opportunity to address these concerns he has. He also responded to a statement that his painting Spirit Dancer Dances Around The Fire can bestow upon viewers a spiritual experience. Listen to part 4, 7:53. 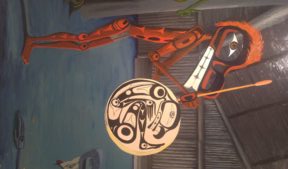 from Sprit Dancer Dances Around the Fire (2016)

In part five Yuxweluptun responded to a question about the transparent nature of some of the images depicted in his work by talking about spirituality.

He said “my job is to enlighten, to entertain, to give you joy…”   He also discussed his use of what he calls “Ovoidism” and whether indigenous people can have an existential thought under the Indian Act, if one does not legally exist. He also talked about his act of shooting up the Indian Act. 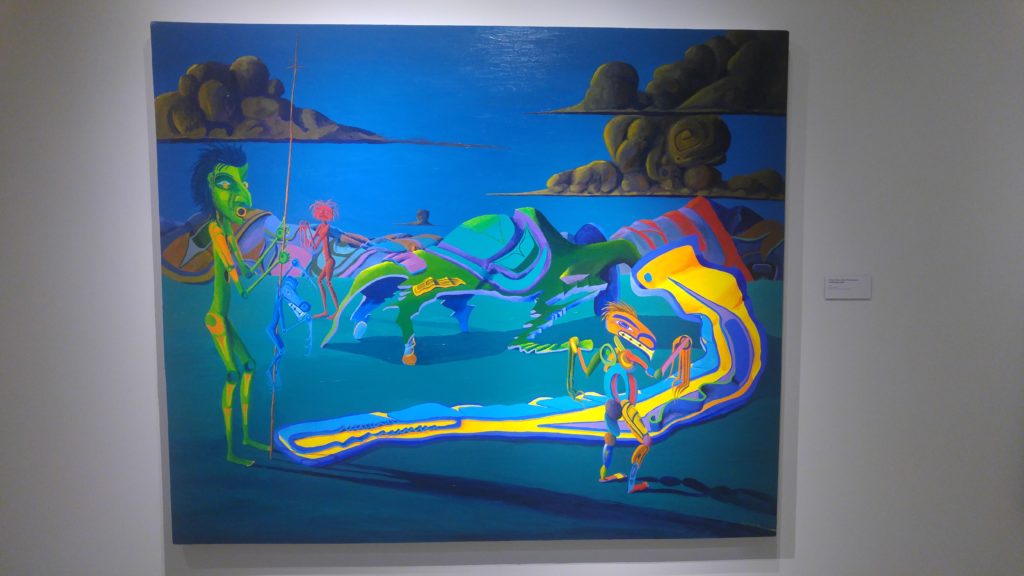 In   the sixth segment Yuxweluptun responded to a question about his painting I Have a Vision, Green Man Comes to Fix the Dying Land (2015). He talked about how his work comes out of visions and not dreams like surrealism. He talked about his experience in residential school and related his anguish about that experience and about his astonishment that there were no graveyards at the new school when he transitioned to his public grammar school. Listen to part 6, 7:35.

In segment seven he talked about stopping “the industrialization of the war machine on the planet” and how that, perhaps initiated by the U.N., would start to make a difference in education and other aspects of life as we prepare to combat planetary climate change. He says the money saved by NOT spending on war would fund education for everyone on the planet. He specifically mentioned species extinction and his memories of songbirds from childhood. Listen to Part 7, 6:01.

In part eight he talked about those who have gone before him from whim he draws inspiration, such as Sitting Bull, Geronimo, Chief Seattle, Chief Joseph, Bob Marley, Gandhi, Rembrandt, Brueghel and Bosch. He talked about his “street education” in traditional art and the class action lawsuit regarding the government’s removal of aboriginal children which, he says, “ruined their families.” He also talked about the way in which indigenous women in Canada are being murdered and how it appears that they can be killed “at will.” He also talked about Pierre Trudeau’s effort of the White Paper Act, which attempted to assimilate indigenous people into “mainstream” society. Listen to Part 8, 7:51.

In the ninth and final segment, in response to a question about what gives him hope, Lawrence Paul Yuxweluptun said that the planet’s climate has been altered and the “Christian God will not save you.” He talked about the need for rapid transit and how Germany is much more advanced than British Columbia and other solutions to the problem of climate change. Listen to Part 9, 12:46.