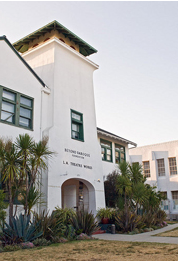 Wanda Coleman did not live to be 70, but today would have been her 70th birthday and as I go back to her work in preparation for a celebration of her memory at Beyond Baroque in L.A. today, I feel her ferocious presence strong as ever.

And when her longtime partner Austin Strauss invited me to read a few of her poems at the event tonight, I agreed. Once recovered from the fest and the recent presidential election (will we EVER recover from that?!?) I got back into the “C” section of my poetry library and enjoyed seeing the chapbooks and the old bookmarks from the visits Wanda made to Auburn, as that was where SPLAB was when we connected. (See bookmark below.)

There are a few good stories I have about Wanda, but they are best done in person and perhaps I’ll share those when I have my time tonight. But I did look over the last thing we collaborated on, an email interview we did about her American Sonnets.  Here is an excerpt:

PN: Sonnet comes from an Italian word for little sound or song. In the era of Open Form, the sonnet has come to be a 14 (or so) line poem which encompasses a method of thought. Is this a sufficient definition for your sonnets? If not, how do you define the American Sonnet?

W: Since jazz is an open form with certain properties–progression, improvisation, mimicry, etc., I decided that likewise the jazz sonnet would be as open as possible, adhering only to the loosely followed dictate of number of lines. I decided on 14 to 16 and to not exceed that, but to go absolutely bonkers within that constraint. I also give the sonnets a jazzified rhythm structure, akin to platter patter and/or scat and tones like certain Beat writers such as Kerouac, Kaufman and Perkoff. I decided to have fun–to blow my soul.

PN: I read #12 again and marvel at its ferocity. Two questions: One, you wrote that after Robert Duncan. Do you remember how that came to happen?

W: Thanks, Paul. I’m frequently a casual reader. That is, I’ll pick up a book at home or someplace else and casually begin reading through it in no particular order, letting some word, poem or writer snatch my attention. If the impulse is strong, sometimes it sets off a poem in me in response to what I’ve just read. That’s what happened with Duncan. It’s not something I set myself to doing, it simply happens.