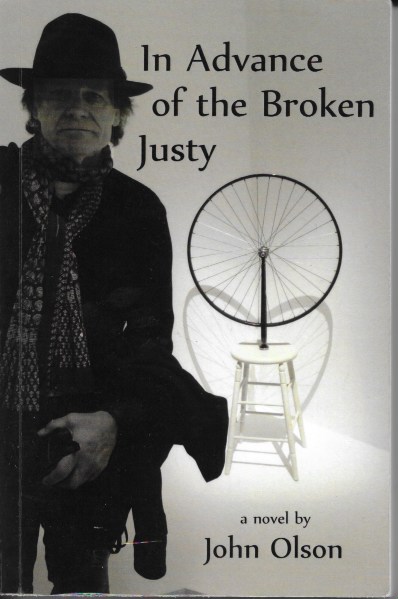 The essential core of any project is to open. Open, open, open. Create a state of total nakedness, an anima mundi, a connection with the world-soul that is non-judgmental and quick to excite. It’s not always pleasant The intelligible world, the world of the familiar, the world in which life is predictable and we fee safe, is annihilated. We’re set loose, like Rimbaud’s drunken boat, to be plunged into a state of “is-ness.” Unadorned being…

So goes a passage in John Olson’s new book, In Advance of the Broken Justy. (Quale Press, 2016.) I’ve known John as part of the Seattle literary community since the days of Red Sky, which would be about 1994 or so and always have loved his sense of play, his use of language, his ability to depict things with perfectly luminous details and his vibrant imagination. All are in play in the new book in a way that suggests mastery. And I think you’ll get some of that as you listen to the latest interview I’ve had the good fortune to conduct with John, this one at his nearly-famous Queen Anne (Seattle) condominium on December 3, 2016.

In segment one John admitted to being an angry person, talked about the persistence of foam and his “laundraholic neighbor “Cindy” and how hard it is for him to wake up each day and “fill (his) head with consciousness.” Listen to Part 1 – 6:00.

In Part 2 John talked about how he sublimates life energies, like that of a neighbor using the communal laundry incessantly, into writing the passages like the one he read in Part 1. He says the writing comes after “a long litany of irritations” and is cathartic. Listen to Part 2 – 5:31.

In the third segment John discussed a passage in his book in which he contends that “every moment is created.” He talked about the joy he gets from writing, or any exposure to art or music and how he has no talent for creating music, one of the great regrets of his life. He discussed a Glee Club experience and about his high school experiences at Burien High and Queen Anne High, including an experience of watching the Space Needle’s construction. He mentioned his that Father was a Boeing engineer and once met Ray Bradbury and also got lost on Bainbridge Island with Buzz Aldrin. Listen to Part 3 – 6:43.

In Part 4 John talked about his love of French culture, how that started with his interest in Arthur Rimbaud, how a city college teacher read him the poem The Drunken Boat and how he knew that’s what he was looking for as a young man interested in the power of imagery as used by Bob Dylan. He also talked about Paris serves as an “anti-depressant” for him because of bookstores, and the general eccentricity. Listen to Part 4 – 6:36.

In the fifth segment John discussed what Seattle was like in the 70s, how the Boeing bust led to space being available to artists and low cost. He also talked about the quality of light in French cathedrals and then the conversation shifted to the 60s, Michael McClure, Robbie Robertson and how poetry was much more a part of people’s lives 45 years ago and had a “strong bond with rock & roll in that era.” Listen to Part 5 – 8:10.

In part six he responded to a phrase in the book “attainable felicities” and how it might be related to The Practice of Outside and how he relates to William James’ notion that being around different people brings out different aspects of ourselves. He also talked about the chapter of the book entitled “Chapter Ending in Blue.” Listen to Part 6 – 4:57.

In the seventh segment he responded to the quote written at the top of this post and he talked about the materialist tendency in this society to judge one’s life by possessions. He believes finding communities of interest is one way to help one open and not be lured by materialism. Listen to Part 7 – 6:30.

In the final segment, #8, John responded to a question about his morning Facebook status update:

I feel like one of those Wild West medicine show guys when I start preaching like this, but you really don’t need codeine or opium or even pot to write the kind of language that stirs and rustles in Lethean enchantment. You just need to figure out a way to do it. Because if you’re in an ordinary state of mind that in any way resembles my ordinary state of mind, you’re fucked. Most of the time I’m in a shitty mood. Angst, mortality, climate change, mass extinction, benign prostatic hyperplasia, envies, jealousies, betrayals, rejections, racism, bigotry, anti-intellectualism, a teetering economy and a flatulent fascistic oligarchy are as common to my daily existence as Wisconsin is to cheese or sewage from a poorly maintained septic tank. I call on the ghosts of Edgar Allan Poe and Walt Whitman and Emily Dickinson to help me out with this. I don’t know how they did what they did but I’m pretty sure Emily Dickinson didn’t go out back and smoke a doobie before returning to the kitchen or linen closet to finish her domestic chores. And yet she wrote marvelously, turned language into a distillery for metaphysical insights and a general euphoric buzz. 1 Comment

He talked about the quote, about upholding human values and whether he and his wife Roberta wi move to France. Listen to Part 8 – 7:23.