I was delighted to be interviewed today by legendary poet, literary organizer and radio host E. Ethelbert Miller for his On The Margin show on Washington, DC’s WPFW. You can hear the interview here and I would recommend his program highly because he does his homework and has a plan, but is able to vamp if he feels the urge. And this morning his plan included talking about Charles Olson, Nate Mackey, Wanda Coleman, among others, my interviews and my 2010 book A Time Before Slaughter which is the first chapter of my serial poem reenacting the history of Cascadia. Thank you Ethelbert! 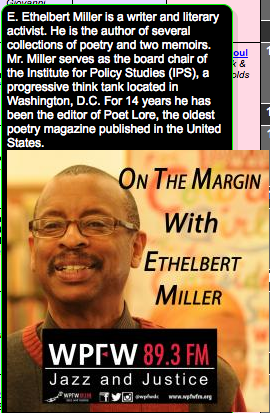