It is easily the most adventurous reading series in Seattle. Margin Shift happens now at the funky Common Area Maintenance in Belltown, essentially kitty corner (or do you say katty corner) from the legendary Grunge venue the Crocodile Café. And being named after the “margin” it lives up to its billing with adventurous writing and poets who are at the margins of society: poets of color, GLBTQ poets and others.

I’ve not really been interested in conceiving of myself as being “on the margins” of society, except for class issues, though my Mother was born in Cuba and my Father was a labor activist almost his entire adult life. A railroad guy. (See this.) He was raised by a single Mom in poverty during the depression and there are stories to tell about that. Mom turns 80 this year and the day before her birthday, a poem of mine that involves my travel to her homeland will be published in “Two-Countries: US Daughters & Sons of Immigrant 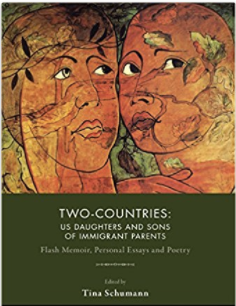 There are things about ourselves that put us on the margins of society, factors noted above and, as Sam Hamill once told me: “You barely pass for a white guy” so there is some privilege I have benefitted from, though the $114 in my checking account that needs to last until April 10 makes any privilege feeling somewhat fleeting.

So, my heart is with the impetus behind this reading series and that it is the “keeper of the avant poetry flame” in Seattle, coming after the Subtext reading series, is critical. Occasionally I find myself attending readings that DO NOT have the understanding of the issues of who is at the margins in this society. They might be readings with all white men, or with risk-averse poets, but the perception at these events is lacking, and a seat in the back of the room comes in handy at these times. So, grateful to be invited (by Matt Trease and Deborah Woodard) to read at Margin Shift and that the margins are shifting away from a dominator ethos, at least here in Seattle, or so it seems. Delighted too, to be on the bill with Carletta Carrington Wilson, who I have not read with since the old Red Sky Poetry Theater days at the Globe Café and two poets whose work I look forward to hearing. 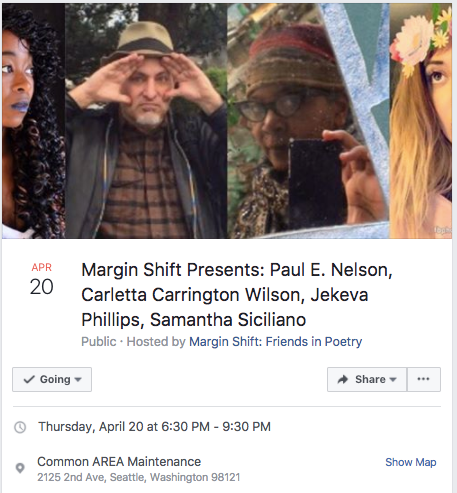 The spring may be slow to kick in here in Seattle, but Margin Shift is shifting as strong as ever! We’re back on the 3rd Thursday, April 20, with four excellent local readers. Head on down to CAM in Belltown (2nd & Blanchard) for some good company, good wine, and great poems. Doors and Wine open at 6:30. Poetry starts at 7. There’s no charge, but donations are always welcome.

Check out our fantastic readers:

Poet/interviewer Paul Nelson founded SPLAB (Seattle Poetics LAB) & the Cascadia Poetry Festival, wrote American Sentences, A Time Before Slaughter, co-edited Make It True: Poetry From Cascadia and his 2015 interview with José Kozer was published as Tiovivo Tres Amigos. Most recently his work was included in the anthology, Resist Much/Obey Little: Inaugural Poems to the Resistance. Engaged in a 20 year bioregional cultural investigation of Cascadia, he lives in Seattle’s Cedar River watershed. www.paulEnelson.com

A literary and visual artist, Carletta Carrington Wilson’s poems have been published in Make It True: Poetry from Cascadia, The Journal: Book Club of Washington, Cimarron Review, Obsidian III, the Seattle Review, Raven Chronicles, Beyond the Frontier: African American Poetry for the 21st Century, Pilgrimage, Uncommon Waters: Women Write About Fishing and Seattle Poets and Photographers: A Millennium Reflection. She has work forthcoming from Calyx Journal.

Jekeva is a writer, educator, and performer. She is Editor in Chief of Word Lit Zine, a PNW lit quarterly. Her poetry chapbook, Les Amants, hit the shelves in 2016, and she currently hard at work on her first novel, Sovereign. Join Jekeva this summer for Bibliophilia storytelling festival at Theater Schmeater.

Samantha Siciliano is a queer experimental poet based in Seattle currently working towards her MFA in Poetics at University of Washington Bothell. Her work has been published in Bodega, Vending Machine Press, The Adroit Journal, Bone Bouquet, and elsewhere. She is the author of poetry chapbook GORGE and has forthcoming work with May Day Press. Her current project is laying the foundation for Pork Pie, a poetry press that publishes the experimental works of queer, non-binary, and trans writers.