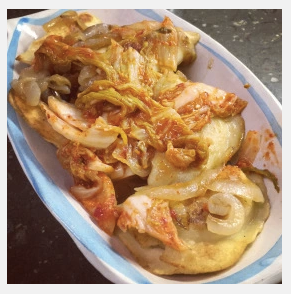 Is it Cultural Appropriation or Cultural Appreciation? Can you tell the difference? Is close reading dead? The issue of cultural appropriation has flared up in the last ten days or so thanks to The Writer’s Union of Canada and syndicated conservative columnist George Will. How many times are THOSE two paired? Bear with me.

Keep in mind this edition of “Write” from TWUC featured – Indigenous Writers! You can imagine that such included writers saw this act, rightly so, as a betrayal. And in The National Post, Niedzviecki elaborated on the “Appropriation Prize”:

Q: People took issue with the suggestion that there should be a cultural appropriation prize. Was that satirical?

A: It was Swiftian. I don’t know if you could say satirical exactly. But the intention is to push some buttons a bit … We have a lot of book prizes. There are book prizes for just about everything now. I was poking a little bit of fun at the number of book prizes out there, and saying why don’t we just have an appropriation prize as well? It was that context… Absolutely not meant at all to be taken seriously or to be insulting… It becomes this whole thing of, when am I allowed to write what and from what perspective? As Lionel Shriver said, in the end you can only write memoir. That’s all you can write? That to me is very limiting.

Then comes George Will in the Washington Post on the subject, with:

The hysteria du jour, on campuses and elsewhere, against “appropriation” illustrates progressivism’s descent into authoritarianism leavened by philistinism. This “preening silliness” — the phrase is from the Federalist’s David Marcus — is by people oblivious to the fact that, as Marcus says, “culture blending is central to the development of, well, everything. Indignation about appropriation is a new frontier in the ever-expanding empire of cultivated victimhood: “Marginalized” persons from a particular culture supposedly are somehow wounded when “privileged” people — those who are unvictimized or less victimized — express or even just enjoy the culture of more pure victims without their permission. The wearing of sombreros at tequila-themed parties triggered — to speak the language of the exquisitely sensitive — the anti-appropriation constabulary at Bowdoin College. Oberlin College’s palate police denounced as “appropriative” an allegedly inauthentic preparation of General Tso’s chicken. Such nonsense is harmless — until it morphs into attempts to regulate something serious, like writing fiction: Do not write about cultures other than your own.

Which reminds me of three things:

1) George Will went to his wheelhouse for an example, the USAmerican 1950s;
2) Sam Hamill posted (or re-posted) on Facebook, this: 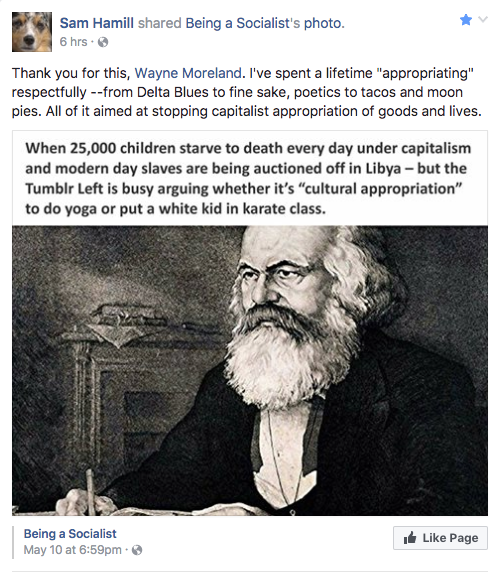 and 3) My own experience of being accused of writing about something of which I had no right to do. When I won the Robin Blaser Award by the Capilano Review, the announcement of it was given as sort of an afterthought by the blogger whose job it was to tell the news, so it came out:

Following “a portrait of thinking” and a story by Sheila is a poem by Paul Nelson, whom Thea’s father has chosen as this year’s recipient of the Robin Blaser Award. The title of the poem, “The Day the Weather Decided to Die”, is parenthetically subtitled “(After a Haida tale told by Robert Bringhurst)”, which sets off bells given the controversy over Bringhurst’s right to tell these tales, but also the form he tells them in, which is poetry, not prose. As Haida scholar John Enrico has argued, these (oral) tales belong in paragraphic prose form, not as Western poems. And while I, like many others, agree that Bringhurst has made something pretty with these poems, I appreciate Enrico’s point, for it too carries the title of a play.

Never mind the form in question was a Haibun and, as such, was not a typical – left-margin-justified – “western” poem, no. That is not as important as someone deciding what other people should write, ESPECIALLY when it is done with reverence, as I believe my poem is. It, like all the other Haibun in that series of 99 is made up of dense prose paragraphs with a “haiku-like” poem in the middle or the end. (I guess I get a pass for “appropriating” haiku!)

Never mind I’ve interviewed Indigenous leaders like Russell Means, Beaver Chief (who also served on the SPLAB Board), Cheryl Seidner, Richard Atleo, Jewell James, Lawrence Paul Yuxweluptun and others. Never mind I created a place for Beaver Chief to hold a Sacred Circle for a couple of years in the Coastal Salish tradition and learned many sacred Shaker songs, or that I ran several of my poems which include Lummi cosmology by legendary storyteller Johnny Moses who said they were: “brutal, honest and a true telling” of what had happened. Never mind I earn about 1/2 the median income in King County and continue to write and present poetry events. There is a righteousness to many people, mostly NOT indigenous, when this issue comes up. There also is a little truth to what each person is saying.

Should we write ONLY from our own culture or experience? It seems to me we need the opposite right now. We need to support creative people and free expression. Back to Niedzviecki, he suggests a writer writing from something other than their own cultural background ask these questions: “…are you doing it thoughtfully? Are you doing it for the right reasons? Only you know that. Only the author knows that. And only the audience is ultimately able to judge that.”

I have used Indigenous stories in A Time Before Slaughter because they are the last stories that come out of a deep connection to the land and may awaken something in the settlers and their descendants that could help save the biosphere and this place which I have come to love since moving here in 1988. They have tremendous energy, surprise mind and an openness that is rare in non-Aboriginal culture. They are often funny. It is material that deserves a wider audience and maybe someone reading my book might go to the texts I used as sources to dig deeper. When I was a teenager just getting into Jazz, it was Jeff Beck covering Charles Mingus that made me aware of Mingus, so Jeff Beck was kind of a bridge. We need more bridges. Like the Kentucky native (Greg Watson) who helped re-publish the Indigenous tales collected from Muckleshoot People by settler Arthur Ballard. When I met Vi Hilbert she told me Greg Watson was her “best student.” Good thing he was interested in a culture other than his own, like Arthur Ballard. We are the richer for it.

So to take a form like the Haibun (from Japan) and use a neo-barroco writing style (pioneered in Latin America) using epigraphs from Spain’s Ramón Gómez de la Serna (who also lived in Buenos Aires) to write about events happening here, in a bioregion known by some as Cascadia, seems pretty original and in the spirit of cultural appreciation not unlike the fusion of Jeff Beck or the fusion of contemporary chefs who create things like Kimchi Pierogies. Bon appétit!