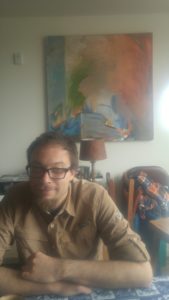 When you think of the kind of person gentrifying the Rainier Valley, a man who could be described as an Anarcho-Leftist, Poet/Librarian might not be tops on your list. Greg Bem is a Rainier Valley person you should know, a compelling performance poet, who has spent hundreds of hours tutoring at risk people, many of them people of color in places like the Rainier Valley and also Philadelphia. We caught up with him to talk about his background, life in the Othello neighborhood, his performance aesthetic and his recent coverage of Paul Allen’s attempt at creating a Northwest version of the South By Southwest music festival, Upstream. READ MORE IN THE SOUTH SEATTLE EMERALD

In the first segment Greg talks about his upbringing, his education in Creative Writing at Roger Williams and working at campus radio station WQRI as well as the music he played there and the antics in which he engaged. Click here to listen to Part 1 – 12:14.

In part two Greg discussed moving to Seattle and the decision to become a librarian. It was an extension of his work tutoring at-risk children in Philadelphia and provides a service he says is critical in this times, one that he needed himself growing up:

I had to have an anchor and if the anchors didn’t exist, if those locals didn’t exist to provide some context … in other words, if I had just been thrown into that space, I would have probably been terrified, afraid, hopeless, etc. And those feelings, of course, came up. But there was a camaraderie that existed there.

To relate it back to your question about libraries and librarianship, though, that kind of fueled what I found in libraries throughout my life, that feeling, that same kind of camaraderie, that stability and structure. I think that when we think of the benefit and value of libraries, even in an age where you have literally words spoken from friends of mine in the tech industry who say, “Why are there still libraries? Why do they exist?” Or “I can’t believe they still exist.” They’re off in their own little bubbles and they have that perspective, that’s the best answer, is that they provide structure and stability.

In the third segment, Greg discussed living in the Othello neighborhood, how he sees himself as a gentrifier, but loves the lack of “Western bars” in the neighborhood. he talked about his literary art, how recent work was inspired by “binge listening” to Albert Ayler

You can see Greg’s performance in Bothell here:

In the final segment Greg did an impromptu performance based on a carton of Silk Non-Dairy Creamer and his experience at the Upstream music festival, chronicled in his review which you can READ HERE. Click here to listen to part 4: 12:54.