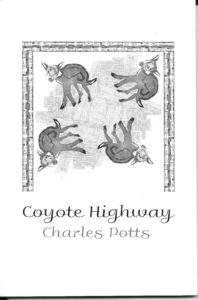 John Oliver Simon, former director of California Poets in the Schools and recipient of an NEA grant for translation, called Charles Potts “…the greatest poet born in Idaho since Ezra Pound…and one of the true faces of North American poetry.” (Read John Oliver Simon wrote about Charles Potts and the Temple in 2001.) Born in Idaho in 1943, Charles Potts is a retired real estate broker, poet, publisher and linguistic geographer. The publisher of the now defunct Temple magazine: “A postnational journal of spiritual elevation to create and maintain a state where the state has no jurisdiction” Charles has published numerous books of poetry, creative non-fiction including “How the South Won the Civil War: And Controls the Political Future of the United States” and the memoir of his nervous breakdown in Berkeley in 1968, “Valga Krusa” and had produced seven iterations of the Walla Walla Poetry Party. He breeds and raises Foundation Appaloosa horses in Walla Walla, Washington.

Your humble narrator traveled to Charles’ new home on Canberra in Walla Walla and on May 27, 2017, sat down to chat again. I think it’s the 3rd interview he’s conducted with Charles Potts.

In segment one we got right into his horse hobby, he now has 18 Appaloosas, how he had gone for 48 years without owning a horse and how he lost horses the first time. He also talked about how his new book “Coyote Highway” came out and read the title poem from it. He talked about his nature as a private person.

The baby coyote scampering across the road
In front of me and into the wheat fields
Eternal coyote grin of the hanging tongue
I imagined on his face
On her face
A coyote has two faces
(So too the road going both directions
And nowhere simultaneously)
Janus and dramatic
The happy and the sad
Bisexual and two sexual
Scampering sin embargo
Nevertheless there should have always been
An embargo on sin
We have coyotes to thank
For making it stick.

Nevertheless time has found my tongue
Hanging on a key signature
Making it stick on frozen steel.

A few days before the Blue Creek Fire
The coyote pup got ran over
Almost exactly where I’d seen it cross
A few days earlier
In the Janus-in-July crunch signifying both
The beginning and the end.

For the rest of the summer I’ve watched
The coyote’s tiny fur bearing body
Get impressed flatter and flattest
Into the pavement
Making it stick
Flatter than your father and mine
Both of them and all others
Becoming a coyote grease spot with hair
Over time by the over bearing weight of the wheels
Of a hundred fire trucks
Coming and going after
The Blue Creek fire
Driven relentlessly by over-dressed fire-proof
Department of Natural Resource men mostly
Pretending to be fighting fire snared
In a stronger force by orders of magnitude:
They were really fighting (and losing to) inertia. 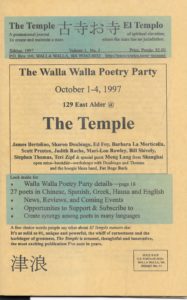 In segment Two he discussed the liability for the fire that devastated his property, about the poet for whom the poem Coyote Highway is dedicated, Amalio Madueño, whom Charles calls “the most under-appreciated poet in the U.S” about L.A. poet Suzanne Lummis and read the poem “The Coyote White Tail War.” Listen to Part Two – 12:37.

In the third segment Charles discussed the poem “Coyote Stretcher” and about how his Father was a trapper and read the poem. He also discussed and read the poem: “Shakespeare Was in Real Estate and I’m Buying the Farm.” He talked about his feeling that you can tell when horses are dreaming and that they are dreaming of running. He also responded to a question about a line in that poem: “The force that brings the human mind to attention” and his reticence to apply that to what fellow Walla Walla residents would call “God.” Listen to Part 3 – 11:15. 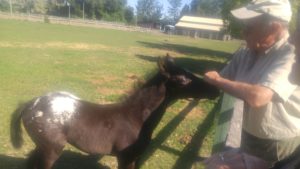 In Part 4 Charles talked about his poem from the new book entitled “Midnight Equestrian” which seems to predict his heart attack, being focused on his legacy, as well as a poem entitled “The Naming of the Horses.” He talked about how he names horses, how each horse “deserves a name as exquisite as his or her soul…” In the poem “Hermiston Horse Sale” which he also reads, he discusses “holier than thou” Christian horse shoppers and his own take on “worship.” (See poem below.) He also talked about his interest in Chinese poetry, his late friend David Wong of New Mexico, got him into Du Fu and other ancient Chinese poets.  Listen to Part 4 – 11:33. 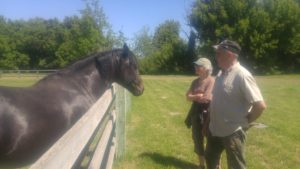 Charles with one of his horses and visitor Bhakti Watts. (The horse is on the left.)

In the 5th and final segment, Charles read the poems “Windy One Week Out” and “Palo Duro Sunrise.” He talked about the experience of burying a horse and about his feeling that the U.S. empire will be here for many decades based on an algorithm used to chart the declines of empires and his knowledge of how the Roman Empire was able to hang on for centuries and his knowledge of that history. Listen to Part 5 – 15:54.

Standing in front of steel stud pens
A man and his son from Elkland, Missouri
Inquire about the bloodlines of my horses.

Preliminary to flashing me
His holier than thou card
The father says with grey beard earnestness,
“May I ask where you worship?”

Up to my knees
In horseshit and Christians I reply,
“Right here where I’m standing.”