It’s almost 4th of July which means August is coming. August for me has become synonymous with the heart of summer because of my poetry postcard habit. This year is the 11th year of the August POetry POstcard Fest which I have a habit of spelling with two capital P’s AND two capitol O’s which led Terry Holzman (90064) to call it PoPo, which I LOVE. So, for about six weeks, I’m a little focused on postcards, buying, writing, sending cards and administering the PoPo fest. 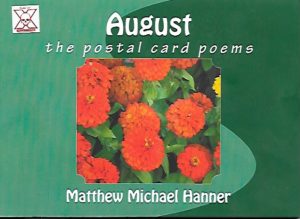 I could not help but want to write about Toni and Michael Hanner (97404.) I met them at Tsunami Books a few months ago and they gave me a copy of their own books of poems created from their postcard efforts and I’ll be damned if they are not the best fucking poetry postcards I’ve ever seen. They are irreverent, intelligent and direct. They are epistolary, as is proper to such an endeavor. They are never clichéd or tired, very original. Like the first poem in Michael’s book from the 2014 fest, the line:

sailing /our paper airplanes into someone else’s August

Here is August, that old lover/ to take us round the dance floor again

In the morning sun
the jasmine reaches out
from its small trellis,
searching.
If I build a bigger one
it will climb that too
and expect more.

Someday it must learn
to do things for itself.

And dig the back cover of Michael’s book: 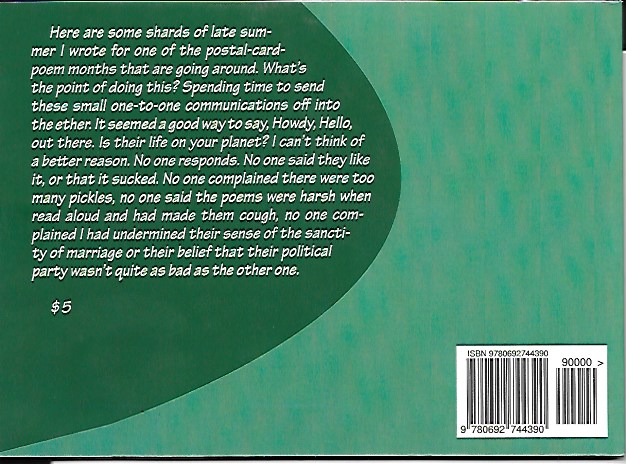 Ain’t that the truth! You send them out and hear nothing! are they glorious? Shit? It’d be nice to get an answer, but isn’t that how poetry’s supposed to work? Do it for the love of doing it? 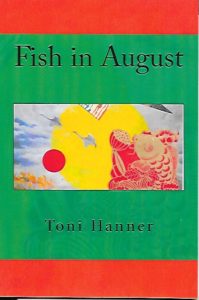 Meanwhile Toni got a book out of the work from last year’s fest. She did NOT submit to our postcard anthology call, the book The 56 Days of August. Our loss. She did write every day about FISH!

The wild iris
won’t bloom
in our pond.

The fish have stolen
all the yellow
from the sky.

Something in the blood
tells the Canada geese
to get up and go, but they have it pretty good
over by the Toyota dealership.

Their V-shaped flights are a formality,
one side of the river
to the other, singing the Goose Anthem.

And any poet worth their salt would have a book of fish poems without mentions of fish in at least one or three of the poems, like

The fan
is making
small plastic sounds
like chickens
sleeping.

And then Fish Poem 20

You may have noticed this poem
is not in French. And so far
it has not had a single fish in it.
The fish are attending a seminar
on “Herman Melville and His Times.”
They don’t even speak French.

I love how Herman Melville pops up here out of nowhere. Surprise mind is one of the great arts of poetry, one of the signs that the person writing has some real skill in the poetic endeavor. It’s a hard one for me to get that quality in my own poems and it gives the feeling of a good joke, but coming from a place deeper down the throat, closer to the heart or spleen.

Thank you Postcarding Hanners of 97404. I hope your letter carrier appreciates you even if your postcard recipients are as silent as yellow-stealing fish under the honking car dealership geese.