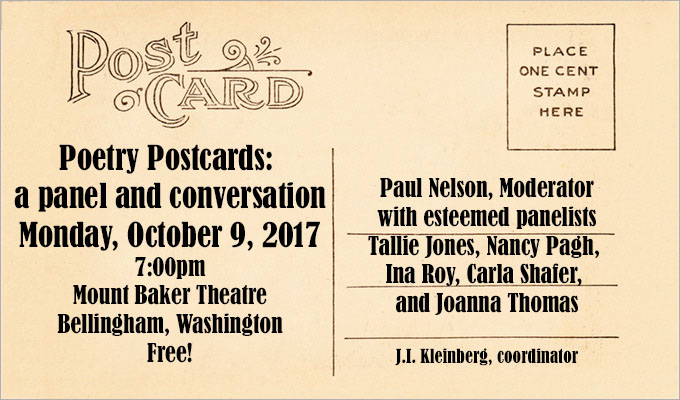 It’s in YEAR ELEVEN which is hard to believe, but the August Poetry Postcard Fest started in 2007 by Lana Ayers and me is going as well as it ever has. With the launch of the poetry postcard anthology 56 Days of August this Fall, there are going to be several events to celebrate the practice of writing poems on postcards to send to strangers. Thanks to one of the co-editors, Judy Kleinberg, an event in Bellingham is the first such event. From Judy:

Poetry Postcards: a panel and conversation will be held on Monday, October 9, 2017, 7:00pm, at the Mount Baker Theatre Encore Room in Bellingham. The event is free.

As you may know, 2016 was the 10th anniversary of the August Poetry Postcard Fest (APPF) and to mark the occasion, we are publishing an anthology, 56 Days of August (Five Oaks Press). This event was initially conceived as a book launch and has grown from there.

Moderator and APPF founder Paul Nelson will be joined by panelists Tallie Jones, Nancy Pagh, Ina Roy, Carla Shafer, and Joanna Thomas. I’m the host and coordinator. The panelists will discuss where postcards fit in the poetry/art/real world conversation. They will show images, offer resources, read postcard poems, and may even offer a prompt.

Also, you are invited to participate in a POSTCARD EXCHANGE. Many of us have unused postcards (commercial or homemade) that we’d be willing to give up. Bring them along, throw them on the exchange pile, and take an equal number home with you.

Several of our panelists will be joining us from outside the Bellingham area. If you are in Bellingham and able to host a postcard poet for the night, please let me know.

And please be sure to mark your calendar for Monday, October 9, and let me know if you have questions.