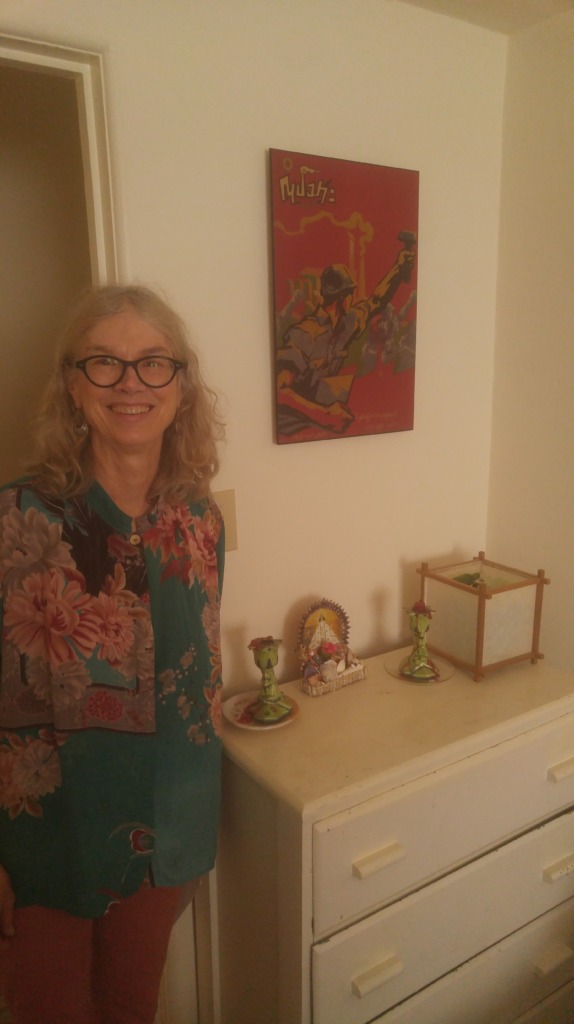 I caught up with Brenda Hillman at her Northern California home August 4, 2017, and we had a lively discussion about her last book: Seasonal Works with Letters on Fire.

In the first segment she discussed her twenty year effort to write books about each of the classical Greek elements: Earth, Water, Air and Fire and how she began to consider writing about a fifth element: Wood. She also discussed how fire would work its way into the process of writing the poems for the book. She spoke of “inviting the element into her unconscious” which she likened to being in love. She credits her “earth-worshipping pagan practice” for the part of the process of writing the poems.

With fire, I was waiting to get to fire because I’m a triple fire sign astrologically. And so I was excited about it, I thought this is going to be exciting; I know fire is just going to take over. And it had so much more varied presences than I had imagined: inner fire, outer fire, world fire, conflagration, you know, end-of-the-world fire, Occupy fire. All of those things, and so I just kind of let it – but I don’t tell the subject matter what to do in my poems. I haven’t for decades. I’m just going to invite you. I’m in love with this idea. And fire is such a cliché for inspiration, for poets. It’s a cliché to think, oh, you know, the inner fire, whatever. So I thought, how can I do it originally? Click here to listen to Part 1 6:47.

In segment two she discussed the late poet Jack Collom and an epigraph quoting him at the beginning of the book. She talked about his approach to eco-poetics and about eco-poetics itself, which she said she has been describing lately as “worried nature poetry.” She also said: “the non-human has interesting “other’ information.” She believes nature to be “endlessly restorative.” She also talked about sending her students at St. Mary’s out to interview bugs. She said:

We did a conference at Point Reyes: The Geography of Hope a few years ago, and Angela Hume, my former student and now poetry colleague and friend, had organized a long interview with me and Bob and Jonathan Skinner, and Evelyn Reilly. And we talked for like an hour about what the word means. And I teach a whole class in it. My latest way of thinking about it is worried nature poetry. When I try to tell my students this big long theoretical thing, what is ecopoetics? It’s sometimes easiest to say, you used to go outside in nature to feel better, and so what’s happened to that impulse? What’s happened to us since the 1820s when Wordsworth would go out with Coleridge and they’d take a walk and they’d feel better?

I still go outside to feel better. I almost always feel better. And honestly if it can’t provide the old magical juice, like the British Romantics, at least there’s some sense that the non-human has interesting other information for my human stuckness. And it’s, as Gary Snyder says, very high-quality information, that’s what he calls poetry. But I think that that high-quality information that we have from the non-human realities are just endlessly restorative. Endlessly restorative. Even if there is climate change and other disastrous stuff going on. It’s not nothing to just still go out and have the interchange. To the creatures: you have a different way of making your breath that I do, and how is it an experience to be you? You know, that bird we just saw. Like, how does it feel to be you instead of a Brenda, you know.

But ecopoetics has to, to me, involve the sense of peril and endangerment that we have created. And I do feel like it’s something about human cause that we’re worried.

In segment three she read the Ecopoetics Minifesto: A Draft for Angie, discussed current California water policy discussions, the masculine nature of most manifestos and likened her minifesto to bouillon. Click here to listen to Part 3 6:49.

In segment four, she discussed her poem To a Sense of the Lively Unit and the notion of letters themselves having intelligence. She talked about an interest in divination, the oracular and Gnostic traditions and links to sound poetry. She read her poem Autumn Ritual with Hate Turned Sideways. It is a poem that was inspired in part by trying to make her activism more poetic, or bring that activism into the poem itself and in part by her anger over munitions sales. She also discussed how trance work helps inform some of the poems she writes. Click here to listen to Part 4 9:19.

In the 5th segment she discussed punctuation, how fetuses look like commas and her notion that lichen looks as if it were made up entirely of punctuation. She read the poem entitled: In The Room of the Glass Breasts. She discussed a reference in the poem, “the Lord of Literature” and said he is “a kind of inspiration figure.” She also discussed Wheeler Hall at the U.C. Berkeley, which was the room referenced in the poem’s title. Click here to listen to Part 5 6:29.

In part six she talked about the Occupy Movement, how she sees it as a massive success and that it was a “leaderless movement” was extremely important. She said foregrounding economic disparity in that way was critical and that opposing the status quo is part of her poetics. She responded to a question about the cluelessness of neoliberals and agreed and mentioned a her process of writing a rant against neoliberals, or “white moderates” as Dr. King put it in 1963. She also discussed notions of privilege, gratitude and sacrifice. Click here to listen to Part 6 8:37.

In part seven she responded to a question about whether this country was worth saving and she said she does not think in terms of nations, but more in terms of universes and entire visible and invisible worlds. She said she is not in favor of saving capitalism as it is now and if our democracy and economic system are tied together, she would not be in favor of saving it. She agrees the response from the USAmerican Left is “inept.” She read her poem On the Miracle of Nameless Feeling. Click here to listen to Part 7 5:44.

In the 8th and final segment she discussed her capacity for a quality Allen Ginsberg called “Surprise Mind” and said, regarding the possibility that this can be taught, that:

Maybe a capacity, like I just saw a hummingbird out there and I think they do see different colors, and so on. So maybe some people do have sort of a different range of perception that they’re tapped into, just like I am not particularly logical when it comes to making mathematical theory. But I do have a metaphor-making capacity. I think children have it a lot and it gets trained out of us, you know. Because it’s embarrassing and you can’t be always doing that.

Paul E Nelson: This professor’s having us interview bugs in the hall. Is she nuts or what? I can just imagine.

Brenda Hillman: And my classes are popular because they get to do stuff like interview bugs. But also because I remind them that when they were children, they were magical, and they got it trained out of them in about sixth grade. I mean, with airport carpet, things like that just bubble up in my brain. They just rise, rise in my brain. I don’t know where it comes from, but it just is there. And so anyway, that airport carpet, I have no idea. You know how when your life is just so tedious and you feel like you’ve forgotten to pay attention to how unusual everything is? It just seems like a deadening pattern, and you know, we all fall into it. And we can get out of it by paying attention again. But sometimes we’ve lost interest because that pattern has deadened us.

We’ve gotten deadened to the pattern rather than the exception. So you know, when you’re in the airport, and you know how hideous it is. The carpet. They choose it because it supposedly will put you to sleep, you know.

Paul E Nelson: They could have poetry readings.

Brenda Hillman: They could have poetry readings.

She also talked about the notion of ancestors being around us in life and that they have to be tuned out at some level, because they are always there. Click here to listen to Part 8 9:34.

Paul Nelson is founder of SPLAB (Seattle Poetics LAB) in Seattle, the Cascadia Poetry Festival and the August POetry POstcard Fest (PoPo). www.POPO.cards. He has published a collection of essays, Organic Poetry & a serial poem re-enacting the history of Auburn, WA, A Time Before Slaughter (shortlisted for a 2010 Genius Award by The Stranger) and American Sentences, a book of 17 syllable poems drawn from the first fourteen of his 20 years of daily practice. The tenth anniversary edition of that book includes Pig War: & Other Songs of Cascadia. He’s interviewed Allen Ginsberg, Michael McClure, Wanda Coleman, Anne Waldman, Sam Hamill, Robin Blaser, Nate Mackey, Eileen Myles, George Bowering, Diane di Prima, Brenda Hillman, George Stanley, Joanne Kyger & many Cascadia poets (see: https://paulenelson.com/americanprophets/) has presented his poetry and poetics in London, Brussels, Bothell, Cumberland, BC, Qinghai and Beijing, China, Lake Forest, Illinois, Ukiah, CA, and other places & writes an American Sentence every day. www.PaulENelson.com
View all posts by Splabman →
This entry was posted in Uncategorized and tagged Autumn Ritual with Hate Turned Sideways, Brenda Hillman, eco-poetics as "worried nature poetry", Ecopoetics Minifesto: A Draft for Angie, In The Room of the Glass Breasts, Occupy Movement, On the Miracle of Nameless Feeling, Seasonal Works with Letters on Fire, To a Sense of the Lively Unit. Bookmark the permalink.