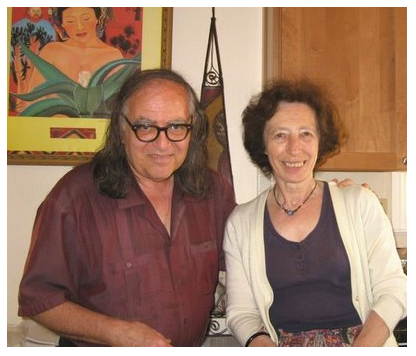 Jack and Adelle Foley are poets from Oakland, California, who performed at the 3rd annual Super Bowl of Poetry at the Northwest SPokenword LAB in Auburn, Washington, in February 2000. It was one of the most intelligent and dynamic performances SPLAB has ever hosted. Jack is a widely published poet, critic, essayist and radio host, and Adelle an economist and writer of haiku. They discussed their early interest in poetry (Jack mentions Thomas Gray’s Elegy Written in a Country Churchyard), their collaboration and their notions of the transcendent properties of poetry, especially in performance. Part 1 (7:55)

In segment two they performed Overture, the first of the choral pieces Jack wrote specifically for performance with Adelle and inspired by Charles Ives, Vachel Lindsay, Antonin Artaud, among others. In the discussion after the performance, Jack quotes Jake Berry who said of their choral work “the reader is seduced into the knowing participation in chaos.” Part 2 (8:19)

In segment three Jack discussed the Current State of Poetry as he sees it; the tension created by uneasy multimedia alliance of poetry’s early roots as a sound medium and the written aspect of poetry and Adelle performed a haiku sequence Bart Bench Haiku. Part 3 (4:59)

In part 4 the discussion centered around an invocation of the ancient Irish Goddess of poetry, Brigid, as part of a workshop facilitated at the old Northwest SPokenword LAB in February 2000.  Part of the practice was creating a space to allow for the expression of oppositions in a peaceful context. Jack also discussed his book Exiles, the notion of poets as exiles and the importance of writers, especially young writers to find a sense of community (polis) in part through culture. Part 4 (11:12)