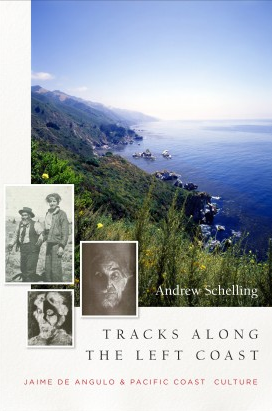 When I was in California in summer of 2017, among my stops were with two poets who were reading a book about the life of Jaime de Angulo (pronounced dan GOO low) who was “a cowboy, cattle rancher, horse-tamer, medical doctor, psychologist, and linguist. A friend and colleague of Carl Jung, Henry Miller, and D.H. Lawrence, de Angulo was the author of several books.” None of his books were published before his death in 1950 and he was responsible for helping preserve 30 Native American languages, most of which were located in Northern California.

The book is Tracks Along the Left Coast: Jaime de Angulo & Pacific Coast Culture. The author is Andrew Schelling, a poet, translator of Sanskrit and long-time teacher at Naropa University. In the preface, Schelling writes of de Angulo that he was:

one of the first to bring into his life the primary characteristics of Pacific Coast culture, art, and scholarship… The encounter with wilderness. The search for primitive mind. A sharp investigation into what language is and how it works. A deep spiritual hunger, lonely, eccentric, keenly unorthodox, alert to Asian and Native California traditions… Anarchist pacifist politics…

This definition of Left Coast culture resonated very deeply with me and has allowed me to draw parallels with Cascadian culture, which shares this entirely, especially if you take out the word “California.” It reminded me of Schelling’s essay “Post-Coyote Poetry” which ran in Longhouse Poetry, an online journal, in 2008, and most of which resonated with me when I first came across it. 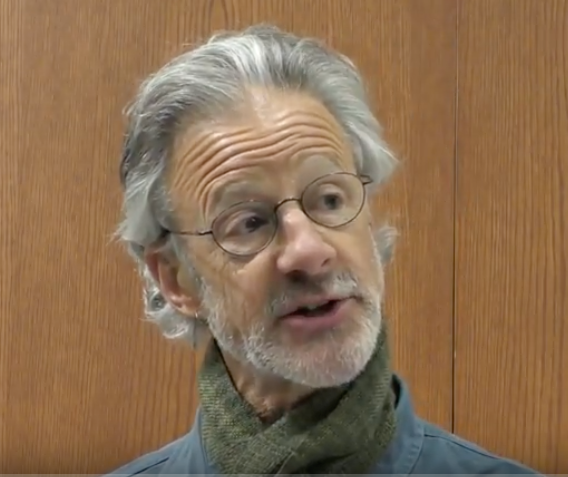 In February 2018, Andrew and I toured Puget Sound, doing readings and interviews about the book. I’ve conducted over 500 interviews, but none in front of a live audience, so this was going to be an experience for me. Here are some audio clips from our tour:

My interview with Andrew Schelling conducted at the Northwind Gallery in Port Townsend, February 22, 2018:

In the first segment from our public interview at Elliott Bay Books, Sunday, February 25, 2018, Andrew read from the book, from the chapter entitled: The Señor of the Brush. (EBB 1, 14:31)

In the next segment from Elliott Bay Books, Schelling talks about how he first came to hear about de Angulo and how he had “the best ear of any linguist in his active days” and how he wanted to do a graduate thesis in English at UC Berkeley on de Angulo (and his wife’s) linguistic work, but was turned down six times and gave up. He also told the story of de Angulo’s dinner with Robinson Jeffers. (EBB 2, 11:08).

In the next segment from the Elliott Bay Books interview, Schelling talked about the Cascadia connection to de Angulo, including Michael Daley and the Dalmo’ma Journal. He talked about how the Pit River Indians got their name and animal species in the American West that are misnamed. He talked about de Angulo’s desire to get away from his nuclear family in Paris, weird facts about de Angulo’s family, his ranch on Big Sur, the visitors there (including Jack Spicer and Robert Duncan) and the tragic automobile death of de Angulo’s son Alvar. (EBB 3, 13:59).

In the next segment, Schelling discussed de Angulo’s ability to discern dialects, he elaborated on his notion that indigenous languages are user manuals for bioregions, read from a letter de Angulo wrote about hearing a coyote for the first time and a tale about how Coyote created the world. (EBB 4, 11:31).

In the final segment from the Elliott Bay Books reading, the notion of the primitive was discussed. In the book the primitive is described as: “How to live free, of the state, of internal police systems, accumulated capital, military force, church dogma, and the monetizing of education, medicine and power…” He talked about indigenous languages, how de Angulo preferred phonetic spelling and how Schelling likens de Angulo’s Indian Tales radio broadcasts on Pacifica Radio as an accomplishment on the level of The Cantos or Leaves of Grass. He also took a few questions from the audience. (EBB 5, 18:31)

Here is Jason Wirth’s video of Andrew Schelling reading at Seattle U on Monday, February 26, 2018:

Andrew Schelling will be the Keynote Poet for our Becoming Cascadian retreat, May 31 – June 3, 2018, in Seattle. Details here: https://splab.org/becomingcascadian/