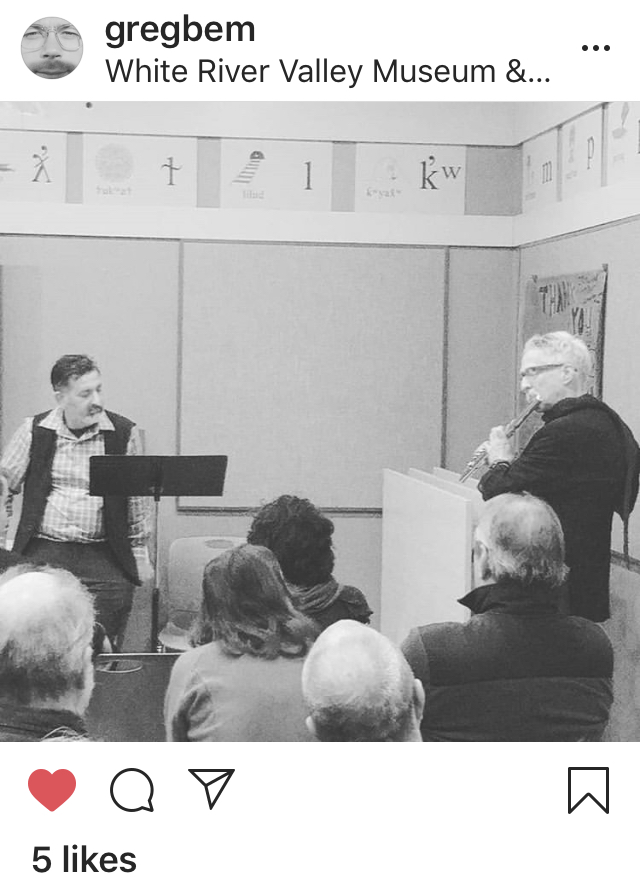 It was a very humbling experience for me Friday, December 14, 2018, to hear very intelligent and considerate people talk about different aspects of SPLAB’s 25 years in existence, with a special focus on our old days (pre-2009) in Auburn and the interview collection we have donated to the White River Valley Museum. Huge thanks to all who attended, starting with my Mom Lesbia Nelson, my sister Barb, my partner Bhakti Watts, my Mother-Out-Law Buffy Sedlachek, former Auburn Mayor Pete Lewis, Tetsusan Jason Wirth and his partner Elizabeth Sikes, Greg Bem, Matthew Trease, Gerald and Brendan McBreen, Joe Chiveney, Daniel T. Fleming, M Anne Sweet, Barbara McMichael, Dan Wend, Len and Linda Elliott, Jim O’Halloran and Lucinda O’Halloran, Thomas Walton, Hilary Pittenger, Cindy M. Hutchings and others. It has been a blessing to be able to do this work and know that there are people who see the value and are inspired. Wow. A thousand thanks. A thousand blessings. Now on to the next project: https://cascadiapoetryfestival.org/cpf-anacortes-2019/ for which we are seeking donations, sponsorships and are preparing to put Gold Passes on sale within three months.

I was delighted to hear the talk prepared by Tetsusan Jason Wirth of the Seattle U Eco-Sangha and Philosophy Department. He has graciously offered me this opportunity to publish the document. I do so, humbly and with huge gratitude.

Reclaiming the Space of Thought and the Poetic Word

What does that mean?

We must first clarify what we mean by the performance of the art of the interview.

We inhabit a media world saturated with the decimation of language into journalistic facts—and in a time of “fake news,” routine executive office mendacity, and ubiquitous ideology, this seems like the best we can do.“Democracy perishes in darkness,” Jeff Bezos and the Washington Post tell us everyday. And indeed it does. As important and indispensable as these considerations are, they obscure the immense humiliation of language and the wide spread degeneration of the gifts of writing and speaking. The interview at first glance merely appears like the routine task of fact retrieval, and the latter, suffering their own extinction event, need to be secured and protected.

We nonetheless also need to retrieve and reconsider how else we might appreciate the art of the interview. (Again, this is not to oppose the journalistic interview—increasingly valuable in these dark times—but rather to open the expanse of writing, speaking, and thinking more fully.)

What is communication in the Zen interview? The great Kamakura period Japanese Zenmaster Eihei Dōgen explained that communication requires the awakening and recasting of one’s mind to be able to communicate and be communicated to. For Dōgen, communication was “Buddha to Buddha [yuibutsu yobutsu].” Dōgen also called this experience ichibutsu-nibutsu, one Buddha and two buddhas, that is, two buddhas realizing their mutual interdependence in the great expanse of the Buddha mind. The Buddha in me speaks to and communes with the Buddha in you. Or better: we both speak to each other from the background of our sharedBuddha mind.

In this sense, the Zen interview is a meeting of the minds, even an awakening of mind itself. It is not a transfer of information

My second model is the word interview itself.

It traces back to the early 16th Century, meaning literally a “face-to-face meeting,” from Middle French entrevue, “to see each other,” or “visit each other briefly.” Entre- means “between” and voir means “to see” (from the Latin videre). In contemporary French, however, one uses the American English term, interview, and its usage attests to the triumph of its journalistic reduction. Its journalistic sense has come to mean: “conversation with someone to obtain statements for publication” and it stems from American English.

The ‘interview,’ as at present managed, is generally the joint product of some           humbug of a hack politician and another humbug of a newspaper reporter.

The naiveté of journalistic interviewing is, as the model of the Zen interview indicates, that a) the interview has its motivation the collection of information; if it is just information, anyone can understand it or learn to be able to understand it; b) the question of the meeting of minds is irrelevant.

However, if we keep listening to the word, interview, the inter—French entre—speaks of a between, a third, that holds together the face to face, or the mind to mind. It is the intermediary that brings the two views together.

We can hearken to this in between by simply reflecting on the fact that Paul Nelson interviewed poets and other prophets. What happens if the poetic voice degenerates into the deliverance of opinions, gossip, and information? You would have to say that the biggest loss is that the fact of poetry disappears in the mere communication of facts, even facts about poetry. If there is at stake the mere transmission of facts, then poetry itself becomes superfluous. Just cut to the facts and just tell the audience what you want them to know. Poetry from this perspective appears like an eccentric conveyance of facts by other extravagant and irrelevant means.

To hearken to poetry, one has to hearken to what it is that only poetry can do. There are many ways to inform people and poetry cannot compete with our dizzying array of electronic information delivery devices. Just “google” it and put the poet out of her misery! Yet this dazzling array recalls how Henry David Thoreau in Walden characterized the advent of the telegraph: “improved means to unimproved ends.” It is quaint to think of the telegraph as efficient, but the world of information on demand demonstrates the prophetic force of his critique: we can with increasing, even sublime, efficiency communicate almost instantly with each other, but this just magnifies the nature of ourself-deception. We still do not have anything to communicate, even though we can transmit our vacuous prolixity with lightening speed. We can communicate faster and more often in an endless proliferation in which we tacitly confesst hat we have little to say by drowning out the silence between us in a din of relentless verbiage.

One of the spokes of the Buddha’s eightfold path is consummate speech, that is, understanding the full power of communication and not defiling it with an aggressive verbal assault that overwhelms the silence and fills the space between us. The poetic word protects this space, nourishes this silence, and takes its strength from this in-between. It does not report. It creates, speaking from this bottomless space that we share. (And since Paul is a bioregionalist, we can also see that this space is also the land that grants our manner of interdependent being.)

Or we can rephrase the problem at hand like this: how does one come face to face with the poet and the prophet? The journalist fails to appreciate that the poet means just what she says. The poem does not mean something besides what it says, as if it were encrypted, waiting for the journalist to decrypt it and report to the authorities what its hidden facts were. In Paterson, William Carlos Williams clarifies: “The poet thinks with his poem, in that lies his thought, and that in itself is the profundity.” To approach the poetic mind of the other, to come face-to-face with poet and prophet, one has to enter the “in between” out of which poetry and prophecy emerge. In a sense, one has to enter the “in between of mind itself,” out of which poetic minds emerge. It is poet-to-poet communication, or with Dōgen, albeit with a variation: one Poet and two Poets, that is, two poets realizing their mutual interdependence in the great expanse of the poetic mind.

The interview as practiced by Paul Nelson is not reportage. It is the dance between listener and speaker where those roles alternate and shape each other and allow the “in between” to emerge with the shape and intensity specific to that dance and to its dancers. The listener has to know, first of all of all, who merits an interview, whose mind has its roots in archaic wisdom, and whose fruits feed the spiritually and culturally hungry of our shared life in the here and now. It has to have a sense of what is worth asking and to allow the answers to shape one’s inquisitive responses. This is not the extraction of information for public consumption, but rather a display of the poetic in-between at work and play. As such, it means what it says and in that its thought, and that in itself is its profundity.

We owe a great debt of gratitude to Paul Nelson and we celebrate the artifacts of this ancient yet strikingly contemporary dance in which the poetic mind as the great in-between of the poetic face to face. 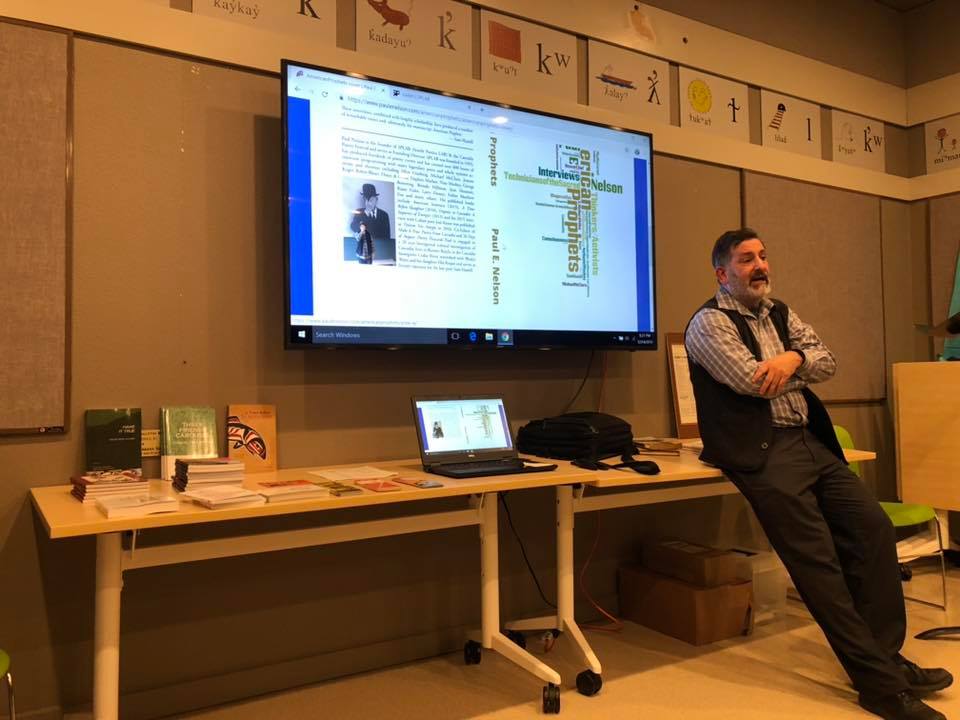