George Lakey Interview (How We Win) 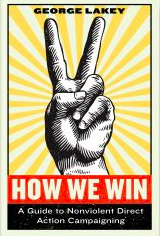 What a magnificent opportunity I had to interview George Lakey on January 11, 2019, on Capitol Hill. I had interviewed him MANY YEARS ago on non-profit development and this time it was about his latest book How We Win: A Guide to Nonviolent Direct Action Campaigning. I can’t begin to tell you how perceptive Lakey is, how knowledgable he is about direct action campaigns and how to make them succeed, but fortunately, there is the book and George in his own words broken down in small audio hunks below. What an honor and privilege it was to have an hour of this man’s time.

There is a great quote by the black feminist activist and author Grace Lee Boggs in the new book “How We Win: A Guide to Nonviolent Direct Action Campaigning.” It is:

People are aware that they cannot continue in the same old way but are immobilized because they cannot imagine an alternative. We need a vision that recognizes that we are at one of the great turning points in human history when the survival of our planet and the restoration of our humanity require a great sea change in our ecological, economic, political and spiritual values.

The author of the new book goes on to say that the U.S. has become “vision-averse” since the decline of the Left since the 1980s. George Lakey has been active in direct action campaigns for six decades, recently retired as a Visiting Professor for Issues of Social Change at Swarthmore College and lives in Philadelphia. George, welcome.

1. Why this book now? He talked about the decline of the Left since the 1980s, the need for a vision of how things could be from a progressive point of view, the limitations of oppositional politics and how Nordic countries had a similar situation in the 20s and 30s and created social democracies that have a higher standard of living. Listen to Part 1 – 6:25.

2. How We Win. Who is the WE Kemosabe? He talked about the “we” being those who subscribes to the vision exemplified by Medicare for All and the policies espoused by the Bernie Sanders 2016 presidential campaign, what Lakey calls “way to the left of the Democratic party right now.” He agrees we live in an oligarchy and therefore giving non-violent direct action a better chance at creating change in the U.S. because of the nature of current U.S. government. He said a good example of a successful non-violent direct action is one that inspired a film on the effort to oust Serbian dictator Slobodan Milošević. (Bringing Down a Dictator.) He said that “whenever a regime uses violence to put you down, they’re actually conceding their own weakness that they don’t have the base (of support) they claim to have.”  He cited other examples, including the Civil Rights struggle. Listen to Part 2 – 6:16.

3. Why non-violent? He answered the question as to why these campaigns should be non-violent, are more effective if they do not employ violence. He said violence leads to the “other” side to justify ever-increasing levels of violence and when a campaign is non-violent, that helps those not allied to either side in the struggle, become allied with the non-violent side. He said the tactic is counter-productive, that non-violence doubles the chance of success of a campaign and can protect a campaign from infiltration by forces not allied with the goal who would use violence to attempt to delegitimize the effort. Listen to Part 3 – 5:59.

4. Jargon/new phrases/framings, used in the book. One example of language use new to me that he discussed was “prejudice reduction” an example of a quality of certain campaigns that help the inner life of each participant. Another example was “spectrum of allies” a reference to people who are in the middle of a spectrum between the campaign organizers and their target.  Listen to Part 4 – 6:29.

5. Action Logic, or how to “show and not tell” about your goals. He cited traffic blocking stunts that do more bad than good in terms of getting more “undecideds” from the “spectrum of allies” to support your cause. He says that this demonstrates a “tremendous lack of imagination.” He noted the Global Non-Violent Action Database which lists 199 different kinds of direct actions. He talked about the disruption of the Bernie Sanders rally in Seattle in 2016 by Black Lives Matter and how that was an effective action. Listen to Part 5 – 6:56.

6. Joining vs Differentiating. He talked about how young activists begin to differentiate their own values from that of their families and begin to be wary of joining campaigns. He says both skills are important and if one can have the flexibility to do both, it indicates a high level of maturity. He cited calling Trump supporters all racist is an example of “compulsive differentiation” and leads to people in “bubbles” which ensures defeat. He says it is a middle class phenomenon and in academia. Listen to Part 6 – 6:15.

7. Mainstream Identity. He discussed how we each have aspects of self which are mainstream and this makes us oblivious to those who do not share that background, or race, gender, socioeconomic class, &c. Listen to Part 7 – 4:19.

Paul E Nelson: Everyone has a mainstream identity.

Paul E Nelson: This is important in the context of class, race, gender, sexual orientation, national origin, and other things. There is some way where we’re in the pocket and we’re blind to that. Isn’t that the case? For example, you’re a white guy. I pass for a white guy, so we have some privilege based on that.

George Lakey: Based on that. That’s the mainstream.

Paul E Nelson: Go into more elaboration on the concept of mainstream identity.

George Lakey: If my primary identification is with my whiteness, for example, then I can be very oblivious to people who aren’t white. I can lack curiosity about them, for example. I cannot even learn about their lives, about what is hard about that, and I don’t really want to look at that privilege because mainstream people tend to want to just assume that that’s the norm and then the others are the exceptions, right? Black people are the exceptions or Latinos are, or indigenous people, whatever.

So, a big burden then for mainstream people is to realize that what’s goes with us, in our mainstream, is cluelessness. In my persona as a white person, I’m clueless. Now, it happens that I’m also gay. Oh, well, now we’re talking, not about a mainstream, because the mainstream sexual identity in this country is heterosexual. Heterosexuals that get the opportunity to be clueless about what the life is like for a gay person, and the kinds special mountain peaks we have to climb in order to do well in our lives because we don’t have the privilege that goes with heterosexual orientation.

One of the complicating things about identity at all, is to sort it out: “Well, let’s see, I have a white identity, but then I have gay identity, but then I was brought working class, that’s marginalized in our society. On the other hand, I went to graduate school and become a professor, so that makes me mainstream, and I’m able bodied as it happens. Whoa, that’s mainstream. I can be very clueless. I’m fine without ramps, why doesn’t everybody do fine without ramps?”

Paul E Nelson: “Buck up and take the stairs, pal.”

George Lakey: Exactly! So, that means equal opportunity to be clueless and that can be hard for people who so strongly identify with their marginality. For example, I’ve run into black people, a majority of my family happens to be black and sometimes one or two of them that I know will go to a place of such strong identity with their blackness that they forget that in their able bodied-ness they’re actually mainstream and they can be as clueless about people with disabilities as a white person can be clueless about their identity as a black person.

And so, there is both equal opportunity for us to be clueless in whatever our mainstream identity might be. Male is mainstream, female is marginal, but on the other hand what everybody gets to be is insightful by looking at the marginal side of them, whatever that is. Maybe it’s hearing voices. Who knows what it is? Maybe they can’t sleep very long so they’re constantly short of sleep. There’s lots of ways to be marginal. We all get to be old.

George Lakey: If we’re lucky, we get to be old and then we’re marginalized and sometimes we can just remember what it was like to be very young, eight years old and that’s pretty marginal. So, we have within ourselves, a capacity to learn a lot about these various identities and the way that society is not fair because it apportions privilege differentially according to that.

8. How to avoid co-optation. He agrees Charles Schumer and Nancy Pelosi have been co-opted and it is tough to avoid this fate. He said it is a matter of intentionality. He discussed an experience in Maine, talking to an environmental group and how he told them their movement was ripe for being co-opted by politicians. He said Democrats co-opt movements while Republicans repress them and that the Civil Rights movement was not “co-optible” by the Democratic Party for its first ten years and its biggest victories came before the Democrats co-opted it. Listen to Part 8 – 4:29.

9. Identity Politics. He says Identity Politics has limitations, but that it is also better for our friends to point out our shortcomings than our enemies. He said having an aspect of self that is on the margin, allows for insight. He says some people put identity ahead of effectiveness, which is not a good strategy for winning campaigns. Listen to Part 9 – 3:46.

10. Quaker Identity. He discussed making peace-making central to the way a society works and how Quakers prioritize this. Listen to Part 10 – 3:09.

11. A. Phillip Randolph, Bayard Rustin. He said they were two of the most sophisticated activist thinkers ever. He said Rustin knew that if economic justice were not achieved after justice in the civil rights struggle that we would be dealing with racism in fifty years. Lakey said Rustin was right. Listen to Part 11 – 3:52.