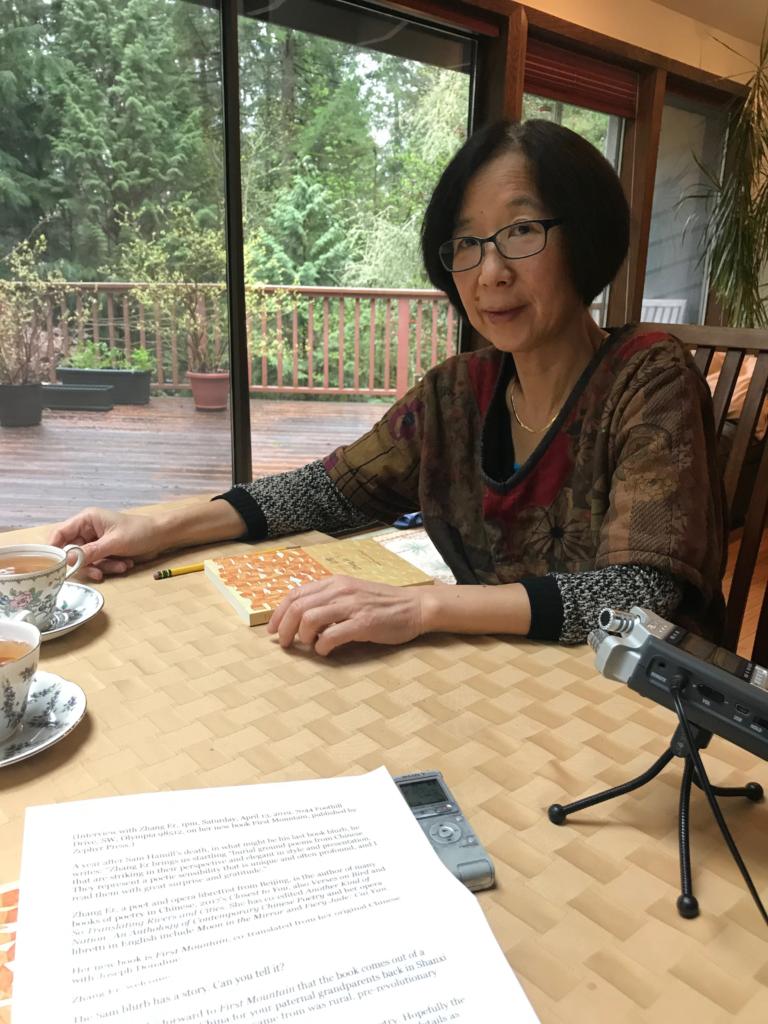 A year after Sam Hamill’s death, in what might be his last book blurb, he writes: “Zhang Er brings us startling “burial ground poems from Chinese that are striking in their perspective and elegant in style and presentation. They represent a poetic sensibility that is unique and often profound, and I read them with great surprise and gratitude.”

Zhang Er, a poet and opera librettist from Beijing, is the author of many books of poetry in Chinese, 2017’s Closest to You, also Verses on Bird and So Translating Rivers and Cities. She has co-edited Another Kind of Nation: An Anthology of Contemporary Chinese Poetry and her opera libretti in English include Moon in the Mirror and Fiery Jade: Cai Yan. Her new book is First Mountain, co-translated from her original Chinese with Joseph Donahue. We had a chance to interview her Saturday, April 13, 2019, in Olympia, Washington.

2. Sam’s Blurb: Zhang Er discusses getting a blurb for the book from Sam Hamill ten days before he died and said that it showed he was a true poet to the end, promoting younger poets. Listen to Part 2: 2:38. 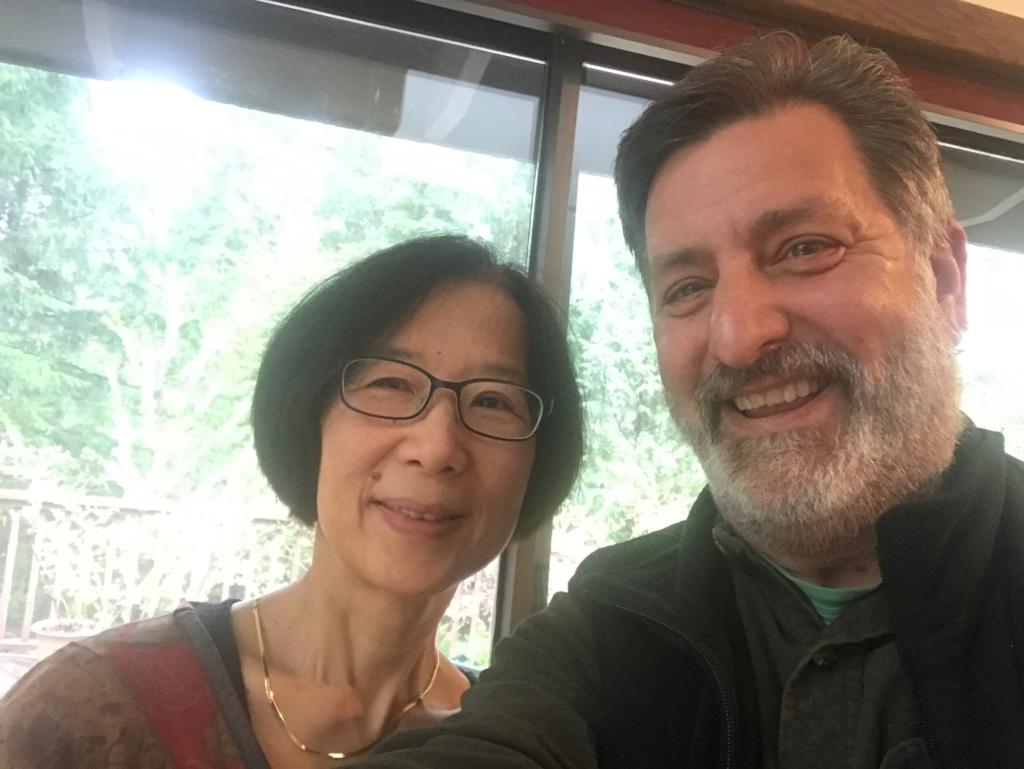 4. The Book of Rites. Zhang Er discussed this classic from ancient China and about the traditions of her grandfather and whether they can be classified as “Confucian” or not. She also discussed the status of women in Chinese culture as, essentially, property. Listen to Part 4: 6:17.

5. Prelude, Part 2. She read part 2 from the poem “Prelude” in her native Chinese and Your Humble Narrator read the English and a discussion of what inspired a certain line ensued. Listen to Part 5: 8:26.

6. Prelude, Part 3. She responded to a stanza in her poem: 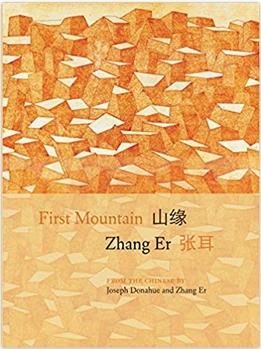 Words are just
a ditch we dig
to direct the flow

She suggested the whole book is a process of self-questioning and reflecting leading as a way of addressing ambivalent issues in one’s life. She also responded to a question about lineation in her poems and how the density of the Chinese had to be more spread out in English. Listen to Part 6: 5:37.

7. The poem Warm the Tomb was read in Chinese and English and she elaborated on the old traditions and beliefs of how fire is used as purification method and communication intermediary. She is said it was not quite Taoism or Confucianism, and part “folk religion.” Listen to Part 7: 8:37.

8. She read the poem Paper Craft, Paul read the English translation and a short discussion ensued. Listen to Part 8: 11:06. 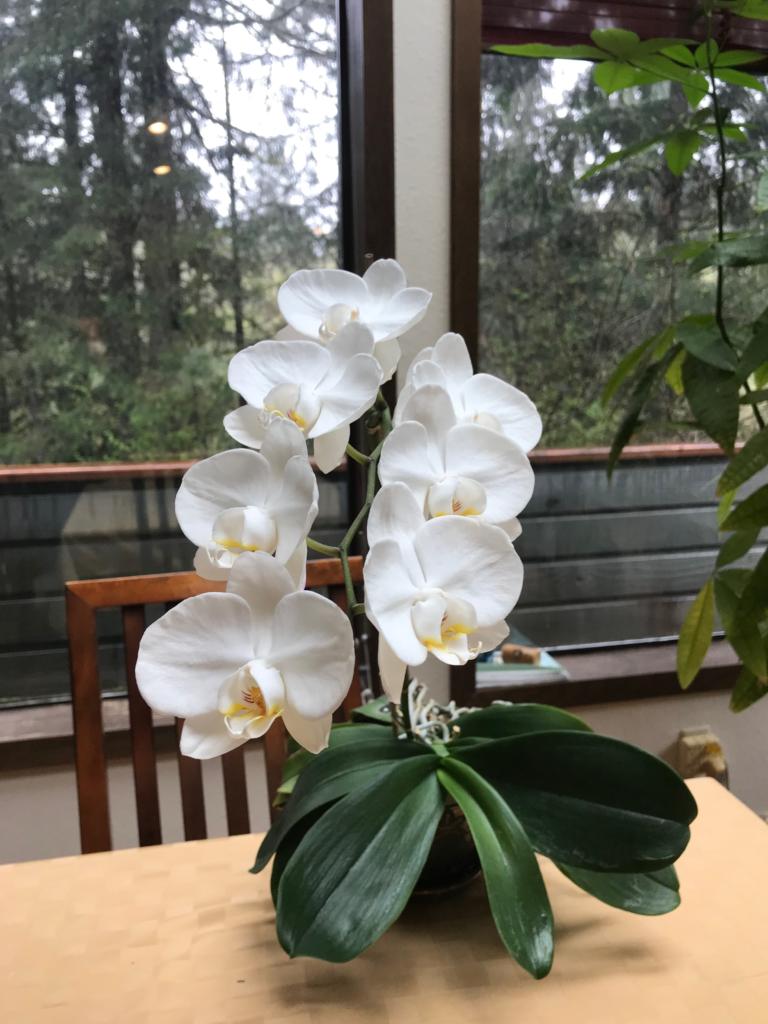 9. She discussed how this experience changed her own beliefs about life and death and provided context for her existence. She said the Western notion of “individuality” was severely questioned by the experience of the ritual and writing abut it and that it opened the door for other experiences in her writing life and life in general. She said First Mountain is a “core” book in her writing life and is nourishing to her without being dogmatic. Listen to Part 9: 5:27.