Huge thanks to SPLAB Board Member and EasySpeak Seattle founder Peter Munro for tipping me off to a new journal named Sons & Daughters that seeks to publish work inspired by Charles Olson’s seminal essay Projective Verse. Peter figured it would be right up my alley and I took a look at their site: 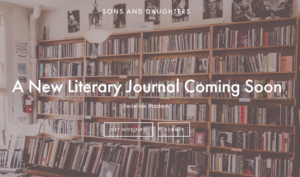 Sons and Daughters is an online literary journal focusing on poetry that furthers the 20th century tradition of Radical Modernism. Many of our heroes can be seen in the New American Poetry Anthology. After running poetry nights in the north of England and attending poetry events in Southern California, we grew frustrated by the lack of artistry and innovation in the current poetic scene. Hoping to foster an environment for new and innovative poetry, we created Sons and Daughters.

Having experienced the great modernist epicenters of California and Northern England, we became disciples of the Modernist pioneers, from Ezra Pound and William Carlos Williams, to Robert Creeley and Allen Ginsberg, and beyond. Though do not be confused: Sons and Daughters is not a modernist appreciation site that is nostalgic for a time gone by. Sons and Daughters seeks to use the principals of the Radical Modernism of the past to shape the future of both poetry and the world we live in. We hope others are willing to help us build that world.

Sons and Daughters takes our name from Charles Olson’s 1950 Manifesto, “Projective Verse”, where he mentions himself and his contemporaries as “sons of Pound and Williams”, Thus establishing a lineage that can be followed to today.

So, I sent in three recent poems that I liked, that were all composed projectively and sure enough got word yesterday that at least two have been accepted:

Hello! Your work has been selected for inclusion! We have selected “94. Dilettante Periphery” and “Angels of Waldport” to be published online as part of our inaugural edition, debuting on July 4th. Thank you for your interest in Sons and Daughters and we are happy to be accepting your work. Your work may be featured on our social media pages or on the homepage of our website, so keep an eye out. If you would not like your work featured on our social media, please let us know. Selection for publication does not guarantee a feature. We may edit your bio to fit into our style guide. If you have any unpublished interviews available, we would love for you to submit them in future submission calls. You mentioned many of our heroes in your cover letter. We would be most interested in any unpublished interview that you might have with poets that appear in the New American Poetry Anthology. Thanks Again.
We are happy you’ve joined us.

They launch their site the same day our August Poetry Postcard Fest kicks off, so it must be an auspicious day for poetry.