It seems rather overwhelming to summarize my experience as a participant of the 13th August Poetry Postcard Fest which longtime participant Terry Holzman a few years ago nicknamed PoPo and an anthology in 2017 called the “56 Days of August.” Yet here I am, putting the cards I got aside for that late summer moment when all the straggling cards appear in our #213 mailbox here at SPLAB World HQ. (Almost typed “Word.” That too.)

I started on a Robin Blaser kick to re-immerse myself in his work. We’re planning the next Cascadia Poetry Festival in May 2020, in part, as a tribute to Blaser as the long-awaited biography on him is set to be released any minute now. The first epigraph I used was: 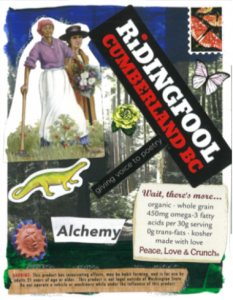 “There is nothing here
but an intense/ interior
monologue with moments
of colour, forms/ flowing
toward beloved plants.” 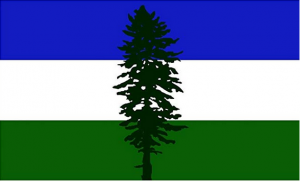 A note on my postcards. I created every one for this year’s fest, had copies made of the collages and could not find a decent place to create good prints of the collages, so ended up using a few of the images twice during the fest. I was vamping on the notion of the Cascadia flag, with it’s green bottom stripe and blue top stripe with a Douglas Fir in the middle, though my fir-painting technique needs work. The flag idea was inspired by my visit to MOMA in May and seeing the take on the USAmerican flag by Jasper Johns.

These first cards were written on July 4, so I had 58 days of August, as it turns out, though was done by August 30. These cards also utilized a technique in which the new card started with an image or line near where the previous card left off and it’s always fascinating to see what was happening then and where it ended up. As longtime PoPo participant Judy Jensen said in 2018: “the fest has become a fixed part of the calendar, as established as Easter or Thanksgiving or Christmas.” “August” feels that way to me as well and it starts on July 4. It also prioritizes poetry in one’s life and stretches out the one poetry-dominant month to 56 days, which is a real blessing in this casino capitalist culture.

Another reason this wrap-up seems so intimidating is that I wrote 81 cards in those 58 days. I took a break from July 5 to the 11th, as Bhakti Watts and I were attending the Subud National Gathering in Albuquerque and there was no time for writing postcard poems. But being a Cascadian in New Mexico resulted in some poems after the gathering, though the inspiration was tinged with melancholy, as a dead friend and mentor (Sam Hamill) came up as a guide from the beyond and my autographed hardovercopy of Blaser’s book The Holy Forest was stolen in Santa Fe. Huge bummer. 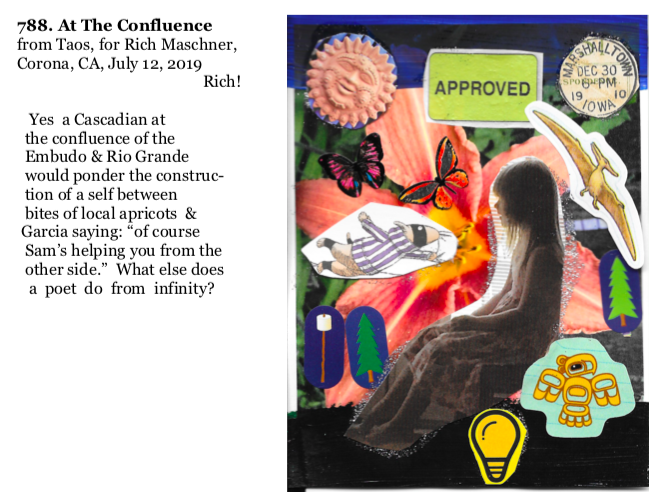 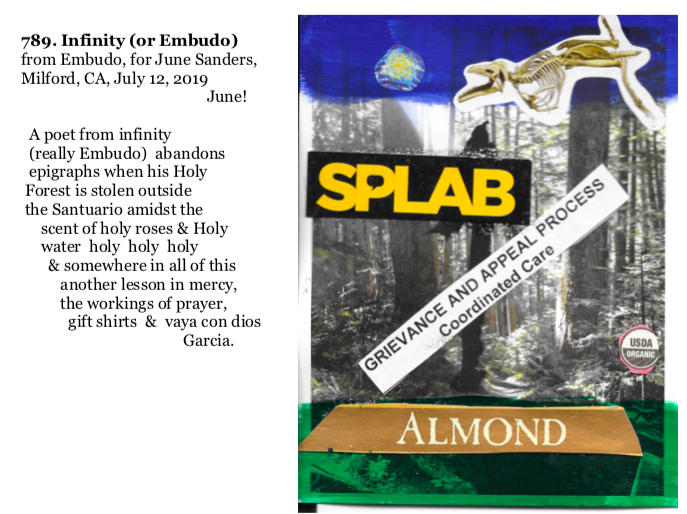 I just noticed the poem that first referenced my stolen book also had a cut out from some of my health insurance paperwork with the quote “Grievance and Appeal Process.” Indeed.

My defiance to the notion of getting down too long over stolen luggage is epitomized in a way by the Blaser quote I used upon our return to Seattle. With my copy of The Holy Forest gone, I had to go elsewhere in my library for Blaser and thanks to a gift from Bill Mahwhinney a few years ago, I was able to quote from The Moth: 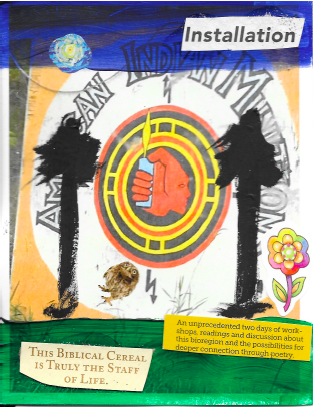 “the moth in the piano
will play on.” – Robin Blaser

I was only home in Seattle two days here at SPLAB World HQ on Lake Washington, when I had to get in the car and drive to Port Townsend for the annual P.T. Writers Conference. That Sam Hamill ran that event for ten years or so, bringing to the conference such literary luminaries as Gary Snyder, Kenneth Rexroth, Denise Levertov and Philip Whalen, among others, his presence was all over that place, including at the only public “memorial” to his memory (Memory’s Vault) and also at a tree planted in his memory: 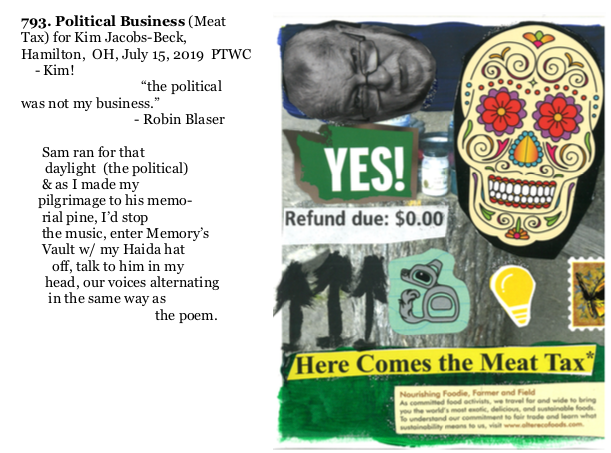 Being a resident at the conference was wonderful, meeting new friends Mifawny Kaiser, Thomas Aslin, George Marie and reconnecting with old ones Donna Miscolta, Claudia Castro Luna, Catalina Cantu, Jourdan Keith. (I loved Thomas’s characterization of Memory’s Vault as “Samhenge.” That made it into a poem or two.) And the barn swallows left their mark: 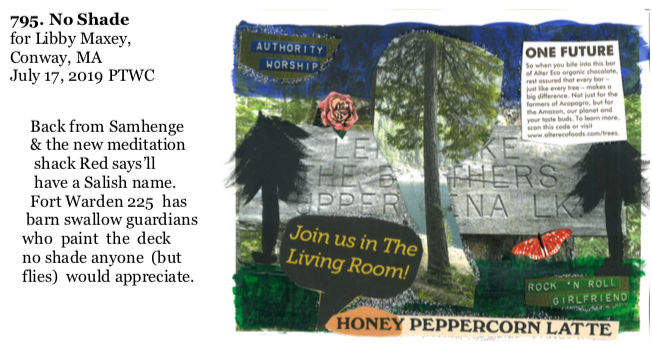 The Red in the poem is Red Pine and I saw him during the week, along with Gary Lemons, and made plans to come back to P.T. after the conference to play golf and do an interview with Red, which I did and must edit and post soon. That the annual Coastal Salish Canoe Journey was happening during the Writer’s Conference was fantastic, as anther great Cascadia topic was dropped in my postcard lap: 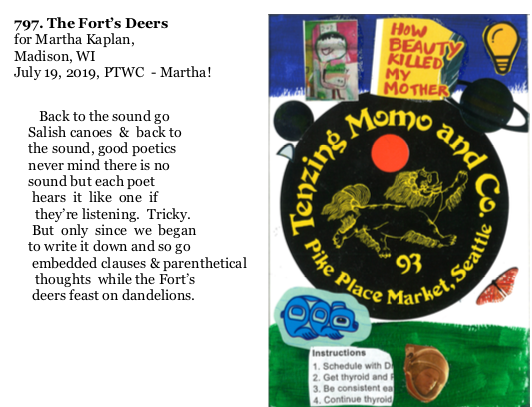 In these two consecutive cards you can see how the thought ending one poem becomes the one starting the next. And so goes seriality. I have found no more open literary form than the serial poem composed spontaneously and the PoPo fest has enabled that. Each year more and more of the beauty of the fest is revealed to me. The notion of spontaneous composition, and the desire to allow people to have that experience, was part of the impulse that started the fest. Writing first draft poems directly onto cards allowed participants the experience of vulnerability, a key requirement for community and an experience that some PoPo participants say discourages more men from participating, because vulnerability is seen by them as a weakness. Creating my own cards started a few years ago, inspired by other participants, and turned into the practice with which I have created over 116 cards. Finally, the penmanship required is akin to calligraphy. One much truly concentrate to have postcards that reveal a focused mind. I hate crossing out and had to do it a couple of times when I screwed up the spelling, or wrote the wrong word on a card. I will work on penmanship in the coming years. 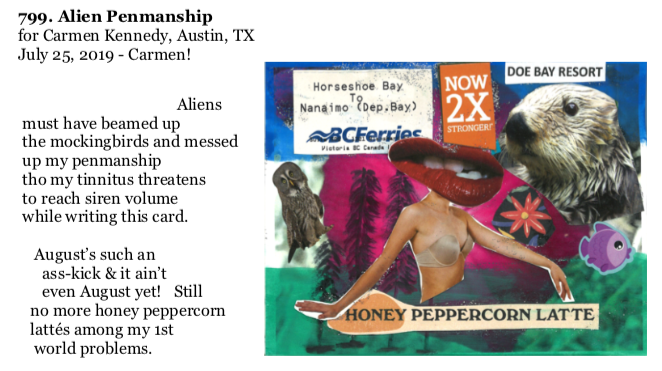 My 800th poetry postcard (I started writing them in 2007 and number them accordingly) referenced the song I listened to more than any other during “August.” That was “You Know, You Know” by the Mahavishnu Orchestra. I became a little obsessed with it, created a playlist based on it (on Spotify) and other similarly-titled songs, got Jim O’Halloran’s band to play it and performed poems with the band at the annual Bradner Garden’s concert. Music has always been a huge part of my life. It provided a foundation before poetry did and I loved how Jim’s band was getting into the rhythm of the poems I read that night. Here’s #800: 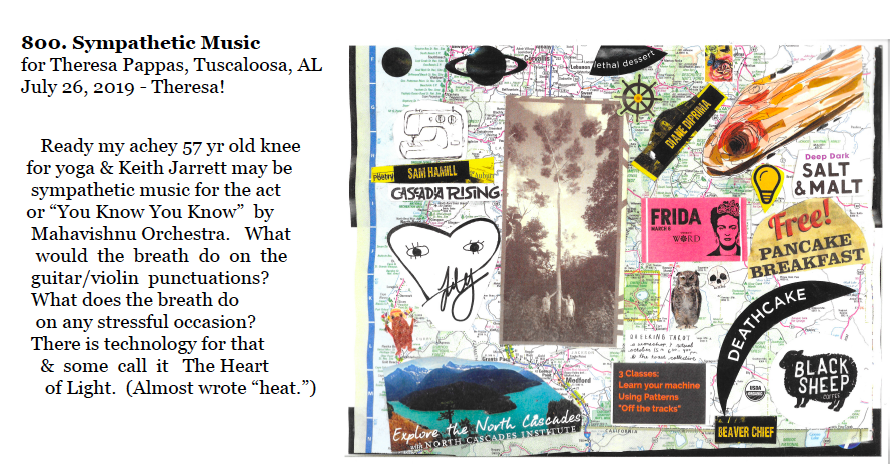 The “Heart of Light” reference comes from a talk given by the founder of Subud.

I experimented with rhyme for poem written to a postcard regular who writes in rhyme and meter. Music to which I was listening continued to show up in the poems: Miles Davis, Eric Tingstad, Keith Jarrett, Circles Around the Sun and others. At this point the month of August started and in Seattle that means the annual appearance of the Blue Angels of whom I have written before with disdain. I think they changed their routine a little this year, but the glory of militarism is lost on me. I’d prefer to watch the swallows, who are freaked out by these war machines and whose aerial glory is more astounding than them, but the hate I had for them is softening. Example: 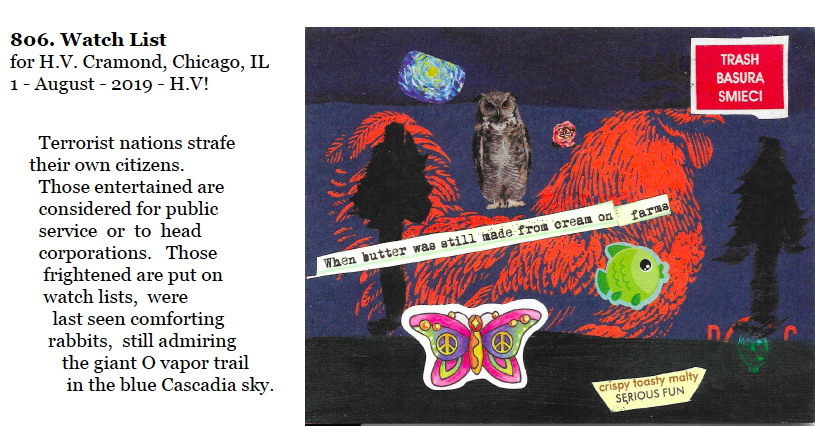 There were several response poems early on in my fest and at least one more formal poem to a participant who sent me a limerick. Always a dangerous maneuver! It also brought in another of my musical faves, Carla Bley. Then El Paso happened and then Dayton. These will always be remembered as events that happened during the postcard fest, like the deaths of Max Roach and Bobby Hutcherson years ago and the collapse of the interstate bridge in Minnesota. Robert Lashley’s response to our current cultural situation made its way from Cascadia Magazine into a poem or two and the modd of the fest shifted for me: 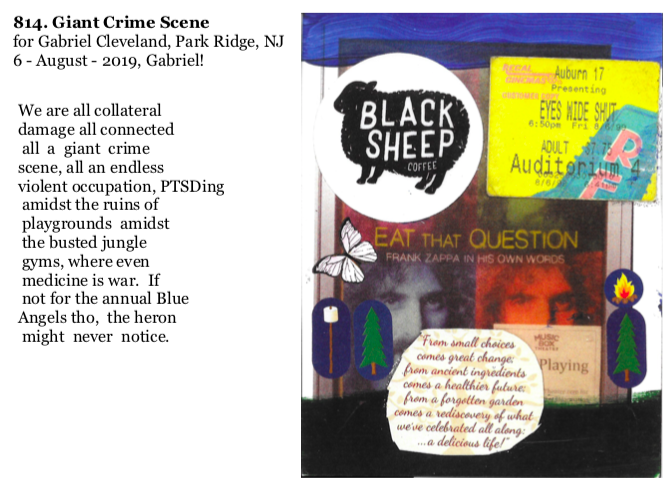 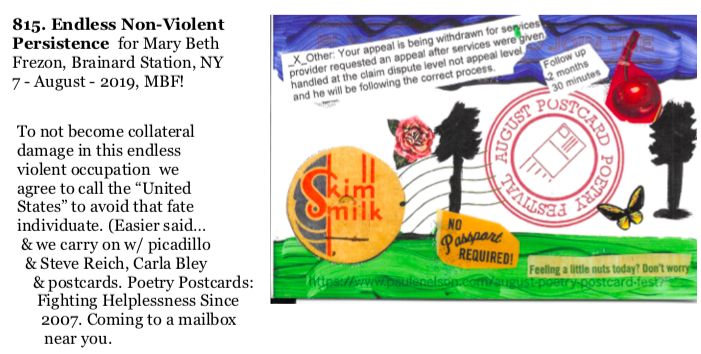 I did a pantoum as a response poem and Carla Bley, Steve Reich and this endless violent occupation we call home did as well. I also wrote an anagram poem that for the first time in my life included the phrase “Scanned Hinterland.” Can you guess which postcard poet provided the letters for THAT?!? 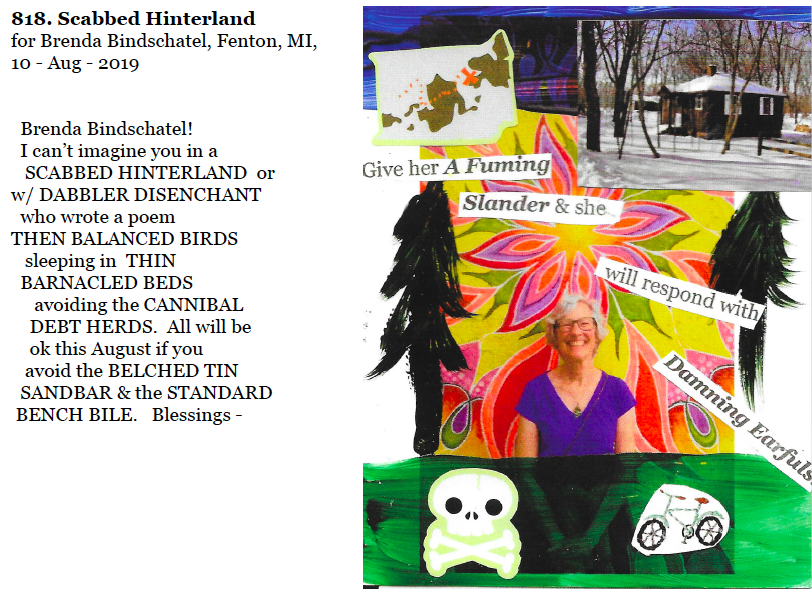 A poem where all the words started with the letter “D” was written and sent out to an unsuspecting PoPoet. Then Will Alexander made his way into my poems, with me lifting phrases from his book “Towards the Primeval Lightning Field.” Wow! 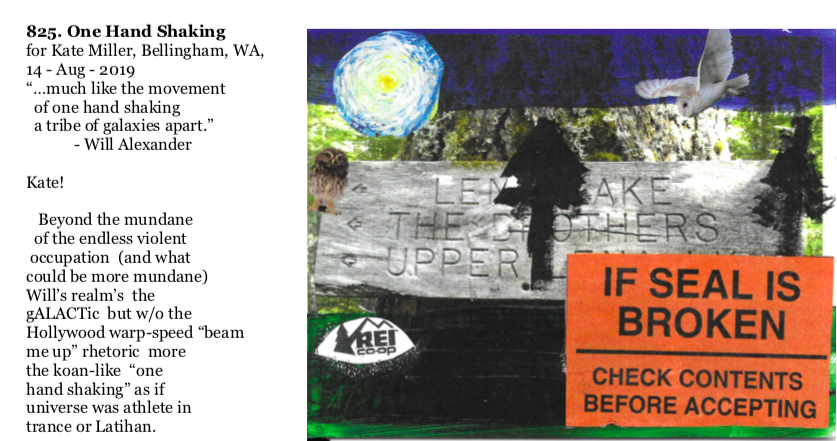 Robert Duncan informed the next poem with a notion about “forced lines” and it occurred to me that ALL postcard poems feature “forced lines” but what they force us through and what emerges after were questions (notions) explored in the span of about fourteen lines. That thread morphed, combined with some of the daily news, the U.S. Federal Government putting refugee children in cages and then another Will Alexander line in #829: 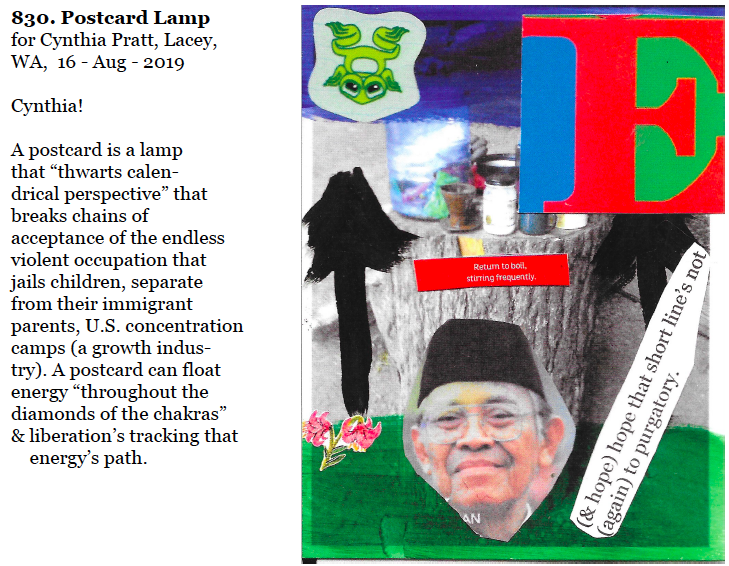 More Will and more witnessing cruelty in #832: 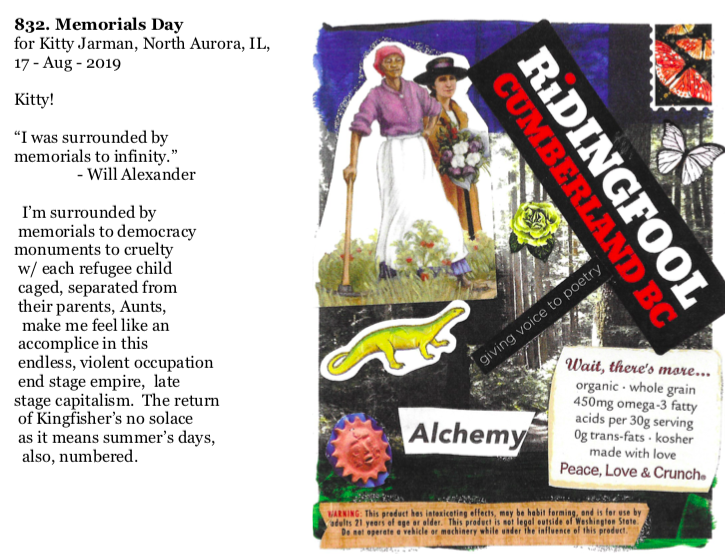 Homemade bread from a PoPoet. Beignets from the pop-up market 300 steps from our house. Charles Olson, Brenda Hillman, pronouns, Denise Levertov, stamps. Speaking of stamps, did anyone think one of those seashell postcard stamps look like a brain? I did a couple of “Rorschach” poems based on what I saw in those seashell stamps. I wonder if the recipient of those poems was like WTF is this?!? Of course, I am sure I elicit that response regularly.

Near the end of the month I visited Port Townsend again, as I mentioned, to interview Red Pine about his chapbooks of translated hermit monks and there was a wealth of inspiration that came from that as I wrote the last few of the 81 poems I would write during this fest.

I have such huge gratitude for everyone who participates in this project and hope we can have 10,000 people doing the fest someday and enjoying the Joy of Postcards. It IS an act of peace to do this and continues to delight me and shape my life.

When the last of the PoPo poems straggles in, I will blog about the poems that I got.

4 Responses to #APPF13 Wrapup (What I Wrote)