The second and third interviews with former Catholic Nun Mary Norbert Körte were conducted by your humble narrator on Friday, and Saturday, October 25 and 26, 2019. While the woodstove fire crackled in the background, she elaborated on her family because she felt that she had been too harsh on them in our interview the previous Thursday. See: https://paulenelson.com/2019/11/05/interview-with-beat-nun-mary-norbert-korte/ She also relatd how her mother was worried about her because she was hanging out with “people who commit adultery and don’t eat right.” She talked about the connection of Beat (as in Beat poet) to the word beatitude, the notion of poets as “oddballs” like the Jesuit priest Gerard Manley Hopkins, the coincidental names of places where she has found herself living and how she has felt guided all her life. She also talked about how that guidance in life also happens in her process of composing poetry as Jack Spicer talked about. Poet as radio “receiver.” Part 3, 9:43. 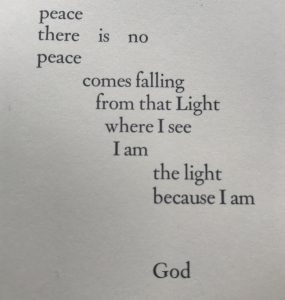 She discussed how her Mother Superior at the convent attempted to censor her poetry and her response to that effort. She discussed the last line of her 1968 Oyez press chapbook Beginning of Lines and how the Catholic church would never allow such material to be published in association with the church. She declined to read from that book because at the time she was struggling and it was a painful time for her. She said that the church put into her a “terror of the afterlife” and she can’t let that go.

She also talked about being in the convent and visiting the Allen Cohen at the offices of the underground paper The Oracle, wanting to be in the company of poets and the trouble she had when one of her poems was published there and how she respected Lenore Kandel’s work, though many at the time felt it was pornographic. Part 4, 10:58. 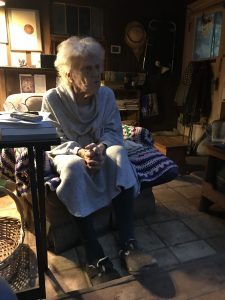 She discussed how her body of work is scattered around (“all over the place”) and how much of it was lost in a fire, some lost in a flood and some lost in a crashed computer. She talked about her friendship with Denise Levertov, how Levertov’s work scared her, that it “cut to the bone” and this in contrast to her person, which was “kind, gentle and kinda school-teacherish.” She talked about her influence on people and she said if she ever influenced someone the impulse came through her and from “somewhere else.” She talked about how she ended up in Willits, California,with her then partner Peter Veblen Van Fleet, answering an ad in the paper for a caretaker of land and how she heard a voice in her said saying that she would live on that property forever.   She recited one of Peter’s poems. Part 5, 12.21.

She discussed the local indigenous culture, that she realized when seeing a billboard that said: “STOP TERMINATION” she understood that she lived in, in her words: “Indian Country.” She talked about teaching English to the local Native people, then running the literacy program and then becoming the Environmental Director. She talked about having a mortgage in her 80s, wishing someone would donate $60,000 to her cause someday and discussed local indigenous use of the area where she lives. She also discussed how she learned about proper handling of indigenous artifacts. Part 6, 11:12. 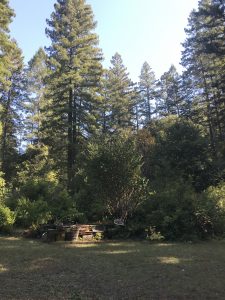 She talked about her response to Michael McClure’s book Ghost Tantras and how she wrote a response poem in the margins of the book and how it was discovered by Ammiel Alcalay and is set to be published as A Strange Gift and as part of the Lost & Found Series organized by The Center for the Humanities at The Graduate Center, CUNY. She talked about her relationship with “beast language,” the language in which McClure mixed with English to create the Ghost Tantras. She found it hard to look at her old work, saying her life: “used to be the lines of the Goddess, now it’s gas lines and water lines.” She read a few of her responses. She talked about her friendship with McClure. Part 7, 9:25.

She discussed Hunter Thompson, Gertrude Stein’s notion that “we feel the same inside all our lives” and read two of her poems, “Tell the Doc” and “The Cult of Firewood.” Part 8, 10:57.

In an interview from October 26, the last session during our 2019 visit, Mary discussed her activism in two different segments, one of which included the Albion uprising:

About Throwing Firecrackers Out The Window While the Ex-Husband Drives By, interview segment 14, and a reading of the last segment of the poem and reading Turning Forty in Willits. She also discussed how she is a little ashamed of her old work. Segment 14, 9:34.

In segment 15, she read the poem God Knows What’s Living In There and discussed the difference between the Cascadia bioregion and the area just to the south of Cascadia. She responded to a question about the connection between water and compassion that she felt was “an interesting correlation.” She noted that it used to rain a lot more when she moved to Willits. She re-read Lares Et Penates for audio AND video. Part 15, 17:23.