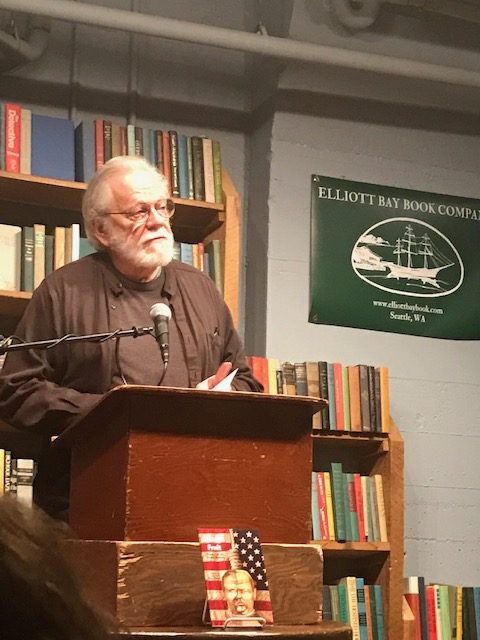 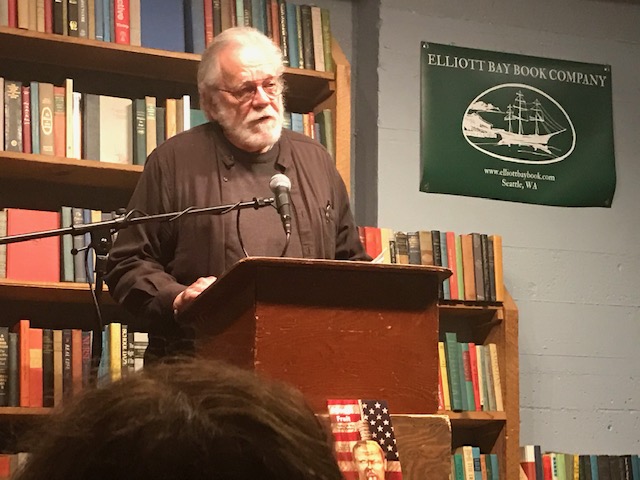 I had the good fortune to read AT LEAST three times during Bill Mawhinney’s tenure as producer of the monthly Northwind Poetry series in Port Townsend over the last 13 years. That he came out of the New American Poetry, and was knowledgeable about poets like Robin Blaser was part of why I have a huge affinity for Bill. That we also have been initiated into the Mankind Project, which specializes in helping men become emotionally literate is also a deep tie. He wears his emotional literacy well and it is clear it guides his life and that reading series. He ran that monthly reading series with love and commitment, as you’ll see in his goodbye notes below, which he granted me the right to publish here.

What possessed me to host poetry readings at Northwind Arts Center in Port Townsend for 13 years?

First, I love poetry. Can’t get enough of it. When I sit down with a new anthology – a fresh bowl of poems – I don’t reach in and daintily pluck out only one. They’re like Fritos! I grab a handful.

But that love alone doesn’t answer why I bother to maintain a reading series. Why be a one-man band doing “blue collar work” behind the poetry? Why open the doors, rearrange the gallery display, carry the chairs and wire the microphone, then after the readings put everything away, wipe down the bathroom and turn out the lights?

I could sit at home in Port Ludlow in my office armchair and munch on poems to my heart’s content. My library shelves are stuffed with poetry volumes. Why leave my house and drive a 40-mile round trip to offer poetry in Port Townsend? Why in these 13 years host over 200 evenings and drive 9,000 miles (the equivalent of three times across this continent) to host them?

Because all that paper and ink sitting on my shelves is, in the end, inert. The most nourishing way to connect with this language I love is to hear words read by their author, imbued with the nuance and spirit that their originator brings.

My second and more important reason for hosting these readings is they hold something precious: words lifted from the page into the voice of the writer where I catch the heart behind the lines, the sounds of an artist bringing them into being.

For 13 years I’ve sustained an oral tradition in this community by hosting evenings where we lend our ears to spoken literature, an ancient art older than computers, older than print, and even older than writing.

I’ve loved holding space for people to claim their voices in front of a live audience. I remember one TIDEPOOLS group reading where a 6-year-old, who could barely see over the podium, was followed by an 88-year-old great-grandmother reading some haiku.

There are no guidebooks or textbooks on how to host a poetry reading, so I’ve made it up as I went along.

After wiring the sound system and shoving chairs into place, I never know how many people will come. I admit on some nights I’ve stood here at 6:45 with nobody in the room and wondered, “Is tonight the night when nobody shows up?” But that’s never happened in 13 years.

I typically invite two featured readers each evening. My rule-of-thumb is that if the poets are outnumbered, it’s a success. If outnumbered by a dozen or more, it’s a huge success.

When the reading is underway, I listen intently and, at the same time, sense how the evening is flowing with the audience. When a poem “lands” in the room, the energy of attention is palpable. It’s as if the poet were the audience and the audience were the poet. They blend into a third life that takes a slow, dreamlike hold – blooming in the space. That’s the magic for me. That’s sustained me for those 9,000 miles.

The poets tell me that Northwind Arts Center holds great vibes as a reading space. They enjoy being surrounded by art exhibits; it beats performing in bars and coffee shops with clunky ice machines or hissing lattes and customers barging in during a quiet passage.

They all agree that YOU – Port Townsend audiences — are wonderfully supportive and really “have their ears on.”

These 13 years hold lovely memories of times when spoken poetry, Northwind Gallery, and audiences became intertwined — all-of-a-piece — connected by language and the love of it.

I give a deep bow of gratitude to the people without whom Northwind Reading Series would not have been possible.

All who’ve served on the Northwind Board of Directors over the years.

Jim Watson-Gove and Don Roberts. They began this poetry ride in 2004.

Michael d’Alessandro, Northwind’s executive director and fellow poet, who supported me enthusiastically from the first day we met.

Hundreds of visual artists who have surrounded and nurtured these readings with the presence of their work.

Reading poetry to strangers is an intimate act – somewhat like a poetic lap dance. So, hats off to the poets who have appeared at this podium with the courage to open their kimonos to the world.

When a poem is said, and when that poem is heard – in that moment of transmission, the poem IS!

Over a thousand years ago, Tang dynasty poet Tu Fu spoke of a dear friend:

His joys were neither large nor many,
But they were precise.

My precise joy is that poetry always says YES to life, always (in the words of John Keats) says YES to “the holiness of the heart’s affections and the truth of the imagination.”

Walt Whitman said, “To have great poets, there must be great audiences too.” My gratitude to all of YOU – the Northwind audiences who leave the comfort of your homes and come here to listen to poetry.

The poetry is not in those books on the display table in the corner or in volumes on your shelves at home. Poetry is right where it’s always been, shining in the heart, rising through the voice.

Poetry is a solitary undertaking. My warmest thanks to all who have read in my series and all who have attended over these 13 years. You’ve made being a writer and lover of poetry a little less lonely. 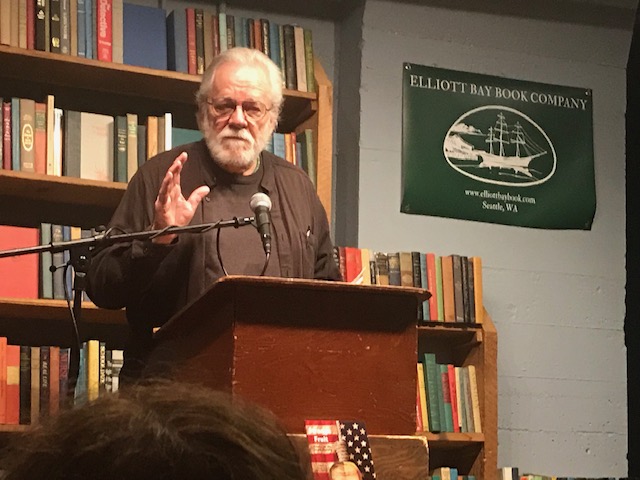