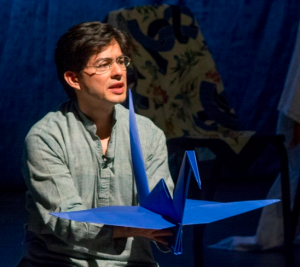 There are two videos in which Your Humble Narrator plays a role that are well worth watching. The first is an interview with Thomas Hitoshi Pruiksma and Shin Yu Pai on a new series at Town Hall called Lyric World Conversations with Contemporary Poets: Poetry and Wonder. An excerpt:

PEN: …Thomas, tell us about how your work expands our understanding of civic life as you understand how it does that.

Thomas: Well, that’s a great question. The first thing that comes to mind is that I came to poetry through the language of Tamil Nadu. And one of the things that really struck me about Tamil is how present the entire poetic tradition is in everyday life, including an entire tradition of public poetry or poetry that addresses questions of politics, questions of ethics, questions of how the larger community or the larger community of communities gets along. And, while the poems that I’ve written most recently don’t as a whole focus on polity or on civic life, there are two things. One is that there’s a kind of underlying concern with ethics, which is an underlying concern with how we get along with each other, both at the level of personal relationships and at the level of the larger relationships between communities of people. But also there are some poems that have come out of my practice, and out of circumstances, and opportunities that have presented themselves to me that are more directly related to civic life.

Thomas:    One in particular is a poem called Here, which I wrote for the Vashon Maury Heritage Museum. Last year they did an exhibit called Joy and Heartache about 125 years of Japanese American history on Vashon Island. And it traced five historical periods in the unfolding of life on Vashon, focusing particularly on the incarceration of Japanese-Americans during World War II. And because, you know, a historical exhibit can be informative but not necessarily engage the imagination, the curators wanted to have some way to enter into the deeper stories of the stories of the exhibit. And so they invited me to write a poem that appeared at the entrance of the exhibit to as a kind of existential preparation, if you will, for experiencing the exhibits.

Thomas: So I wrote a poem which traced not only the experience of Japanese-Americans on Vashon Island, but the relationship between the living and the dead, and the relationship between the original inhabitants of Vashon, what we now call Vashon, the Sqababsh people, the part of the Coast Salish peoples. And how the first internment of the first incarceration began then, in the 19th century with Europeans and other settlers coming to that, to Cascadia, and how we see these patterns repeating through time, not only in our public life, but also in our hearts and in our dreams. And so as a poet, I’m interested in that intersection. The intersection of the inner world and the outer world, the heart and the community together, intertwined.

The whole video is here:

Tom Prince was on the ball again with his video camera and editing skills to film the memorial tribute to Judith Roche at Jack Straw Productions on January 5, 2020. I read my elegy for Judith:

There are two other memorials for Judith. See: https://paulenelson.com/2019/12/26/three-memorials-for-judith-roche/