Plugging Into the Current: The Immediacies of Daphne Marlatt’s Writing

I had a flurry of activity about a month ago. I prepared a talk for a poet’s society with which I was engaged for a couple of months to serve as a sort of “dress rehearsal” for a talk at a conference I had a hand in planning. My talk was about SPLAB‘s 20 year bioregional cultural investigation. In that talk for the Cascadian Zen conference, using slide-show images as prompts for improvising about SPLAB’s work and findings since 2012, I brought up SPLAB’s poetics. How can I articulate that? An old post from this site, Writing or Re-Writing from 2013 further developed the tradition of spontaneous composition fostered by many of the poets I have written about many times over the years and I leaned on that for CZ.

So, to be reconnected with Daphne Marlatt (who I interviewed January 11, 2014) at the February 14-15, 2020, Cascadian Zen conference at Seattle U, was a delight and reminded me of the power of her poetry and her perceptions. Having been a founding member of one of the most influential movements in Canadian poetry (TISH) and linked to West Coast poets of the Organic/Projective/The Practice of Outside tradition (Robert Duncan, Charles Olson, Denise Levertov, Robert Creeley, Robin Blaser and others) she has a good bead on what Cascadian Zen might be and her presentation was clearly the highlight of a conference that had much to offer. Her understanding of place, the indigenous culture here, the power of poetry ESPECIALLY the outsider traditions of the New American Poetry, the prophetic nature of the first two waves of feminism and the benefits of decades of engagement with Vajrayana Buddhism were woven in with her own poetry acting as a spice within the stew of her talk.  I wrote an American Sentence based on something she said: 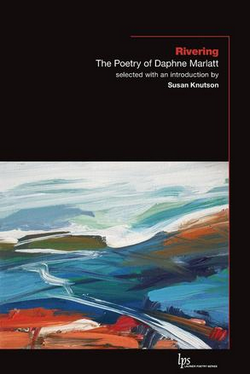 So, I went back to the Marlatt book that I got right AFTER I had done that January 2014 interview. That book is Rivering and I loved this sampler of her work as well as the book’s closing essay “Afterword: Immediacies of Writing.” Some notes on that essay:

“So here, at the beginning of my writing, was a basic dualism between my woman’s body and then-inherited place in the world, and a male-engendered poetic and grasp of that world.” (She touched on this during our January 2014 interview.)

She notes in prose “the appeal of the rhythmic run of a sentence, the way a thought will grow, extending itself through rhythmic variation, syntactic possibility, and melodic association to branch out into extended meaning — as if a sentence might embrace the multiplicities of an immediate world/whatever is local to it.”

After discussing some of her 1960s mentors (mentioned above), the social movements of period between the 60s and 80s: “civil rights, anti-war, feminist, and later post-colonial and lesbian/gay rights” she mentions aural history, intertextuality, etymologies and how poetry for her “has never been a form of reportage. Composition, the act of putting words together, is full of immediacies. There is always edge, the edge a poem rides in its coming into form out of the inchoate, the formless.” All these things are fascinating (& validating) to me. I am reminded of Barry McKinnon, another brilliant BC poet who notes that William Carlos Williams once said that “each poem you write should be a summary of your life up until that point” and not only does that resonate with me, but comparing one’s outside life to one’s inner and one’s personal mythology is always a rich ground for investigation. This was true for me in a huge way at the Cascadian Zen conference (& the short-lived engagement with the poet’s society) and a reminder that it is our shadow dance with others (& the pain which often accompanies that) that allows the greatest self-knowledge.

“In its coming into words (the immediate act of composition), a poem will generate a current, a charge as it develops. This current pulls into it material that may simply be flotsam (surface float) or may further the current, twist and merge with it. Writing — not the fingers on the keyboard or the pencil (yes, their rhythms and movements too) so much as listening, listening in the echo chamber language operates in charged thinking. Hearing other / alter(ing) even errant possibilities of connection both phonemic and semantic levels, on memory levels (resonating phrases from others’ work through time, all points of contact in the resonating web of language that is our medium for thought.”

Listening to the charged language of thinking for the current. Wow. This is consistent with a little trick of Jack Kerouac’s Michael McClure once taught at the old SPLAB called alluvials. That is, when one gets stuck while writing (spontaneous composition, of course) go up a line, or a few lines, or to the start of the poem being written and re-read it and the current is found again. One can continue. (It is a good feeling to get back on track. Like finding the stock path again when bushwhacking.) Not sure if this works in the 19th draft school of poetry composition, nor in traditional North American MFA (workshop) poetry, but I’ve never found a home there anyway.

Bravo Daphne Marlatt. We’ll need this in the interdependent future, which of course, is now. Or as she says in the poem in Rivering entitled “In the current”

“The processional aspect of the world”: some pointers from Robin Blaser on writing now”

This will be a session that talks about what might be involved in writing our actual present. It will begin with a brief talk that unfolds from the above phrase taken from Blaser’s germinal essay, “The Fire.” This session begins with the question: how write out of both the personal and the so-much-larger than personal in our crisis-riven time? It will include a reading from one of his serial “Image-Nation” poems. There will be time for discussion of these ideas and how they might be relevant to one’s own writing practice in the present. If further time allows, there will be a prompt for an on-the-spot writing session. Registration is open: https://cpf-sji-2020.bpt.me/ and info is here: