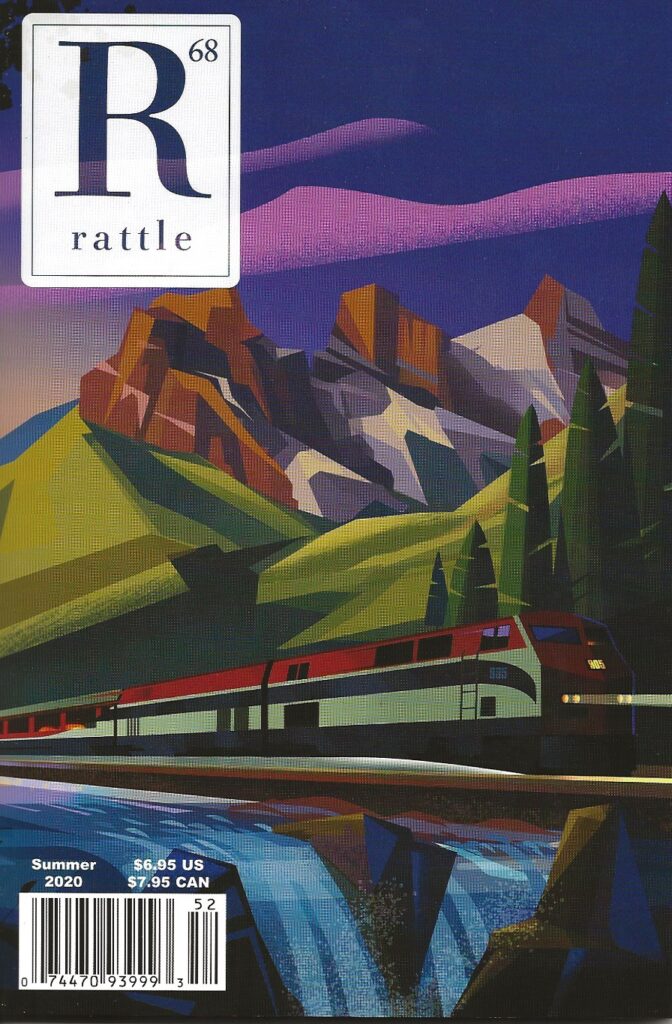 I’m delighted to have a poem and an interview in the latest Rattle Magazine. This interview is not one I conducted but one that was done with ME! And it was the best one anyone has ever done with me. Thank you Tim Green for taking the time to ask some good questions and for featuring me in Rattle.

I love that the edition has a feature on POstcard POetry and also delighted to see some friends and POPO people represented. Laura! Rhonda!

Here is a snippet of the conversation about my American Sentence practice/project:

TIM GREEN: I always think of poetry as a secular religion, a spiritual practice of meditating and reflecting on life. You have a book called American Sentences, and you’ve been writing an American Sentence every day—you still do that, I assume, after the book came out, right? So, it’s about like sixteen or seventeen years now…

GREEN: Twenty, okay, so you’ve been writing an American sentence every day, without fail, for twenty years?

NELSON: Yeah, I fill up a lot of these little notebooks. I write the sentence, and I circle them and date them. I haven’t harvested last year’s, and I started at the beginning of 2001, on January 1, 2001, to get a head start on a SPLAB workshop on short forms that Ginsberg espoused for our Allen Ginsberg Memorial Poetry Marathon. Anne Waldman and Andrew Schelling were the facilitators of that, and then I didn’t get to take the workshop because I had to work at the NPR station that day. [laughs] But I didn’t stop, and got the book out, as you alluded to, American Sentences, and still write one every day. I pretty much do it for myself. They may be short journal entries or other things that other people wouldn’t get. If you know the background of a poem, you’re going to get more out of it. I have a seven-year-old daughter and she said yesterday, “When Bhakti and I are dead, our adjacent tombstones will say, ‘They loved tacos.’ [both laugh] Why a seven-year-old would think that’s an appropriate epitaph, I don’t know! But you know it’s something I’m going to write down. It’s not up there on the level of Basho or Issa, but it’s a little slice into my life. It’s like Ginsberg describing his photography—his photographs “captured the shadow of the moment.” I think the best short poems in this form do that for me.

GREEN: I love that phrase, “the shadow of the moment.” I haven’t heard it put that way, but that’s exactly it. Do you find that it enhances your experience of your own life? It seems like it would. If you’re always looking for something to appreciate or looking for something to notice that must fundamentally change your mental processes as you got throughout the day, right?

NELSON: It heightens your perception. You find that a lot of these lines end up in the longer poems. Lately I’ve been writing prose sonnets, and these images stick with you. And then they mark things in your consciousness, like remembering the person I was married to in the situation of a dirty refrigerator, how it took from Thanksgiving ’til January 9th, I think it was—the American Sentence goes something like, “Would her Thanksgiving stuffing have been this hard to flush had we eaten it” [both laugh]. It was frustration with a partner who was not interested in eating the leftovers or cleaning them up, so there’s a little bit of charge to it, and the charge I think lent itself well to poetry. That person, the mother of my youngest child, at first she’s like, “don’t be bringing THAT up,” and then I would read it in public and people would just break out laughing, so now she’s like, “Read the Thanksgiving one!” [both laugh]