The Art of the Blurb

I have been asked on occasion to write blurbs for friends and acquaintances and, like any other form of writing, it takes some practice. The first thing is to learn what NOT to blurb. Really, if it has your name on it, you should stand by the writing and it’s hard to say no to friends. I saw Sam Hamill piss off a poetaster who at first wanted a blurb, because he was asking Sam after all, but when Sam told this “poet” the truth about his work, that he should polish the poems a little and not publish them just yet, the poetaster called Sam a “has-been.” Nice. Why ask a “has-been” for a blurb you wonder?

“he was right: people

don’t change. They only stand more
revealed. I,
likewise.”

So blurbing involved the danger of a ruined friendship, although that’s a little like when you lend someone $20 and you never see them again, it was probably worth it.

& then there is this great blurb by George Bowering for the 1987 edition of Fred Wah’s Music at the Heart of Thinking:

The word ‘heart’ contains, if you are spelling it, he, hear,
ear, and art. Fred Wah knows this, and we know that it
is either too easy or very hard to imagine the present
participle of a verb having a core. This book, if it is hard
enough to read, will reward and amuse you, I promise.

I did get some sweet blurbs for the first edition of my first book A Time Before Slaughter which you can see here: https://paulenelson.com/atimebeforeslaughter/ 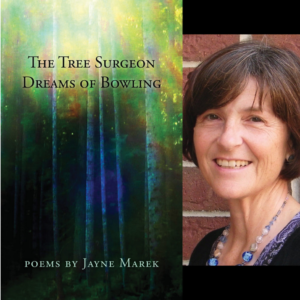 & here’s where I come in with my blurb for Jayne Marek’s fine book The Tree Surgeon Dreams of Bowling:

Here is perception let loose and used by the intelligence of language surprising and fat as a lost sock (that’s actually a drowned mole) or crow gangsters caught in the act. One reads this work with a combination of the dread of grief that lurks behind the next fence and the delight of each luminous detail reported with the deep feeling at the core of the kind of poetry we come back to again and again, because we sense there is something more, something we might have missed.

There was a little dickering over commas and parenthesis, but they were friendly amendments, so it was easy and the blurb was used. I love crow gangsters! Gangster crows! What crow isn’t a gangster?!?

More recently there is a blurb for Greg Bem’s upcoming book, A Language of Spray and Mist:

When I read Greg Bem’s work, the visionary & the wild are activated in me. There’s a hunger for experience balanced with the kind of presence and intellect you’d find in a librarian. A post-colonialist & anti-racist often found on a mountain in Cascadia, or a rainforest when not in a library, Greg Bem is a 21st Century North American poet, living in the margins left for white men who choose to use their privilege to confront their own fear in an age when so much is breaking down. He knows the answers are in rituals and in the “urges of flora and fauna” and his writing’s a report of the evolution of his own personal mythology getting us, “closer and closer to the decontextualized core” of his self and our species. Reading his work validates the desire to allow “the world to continue sliding by in the fullest spectrum it can” when almost all contemporary poetry settles for so much less.

— Paul E Nelson, Founder of SPLAB, the Seattle Poetics LAB
author of A Time Before Slaughter: Pig War & Other Songs of Cascadia

Is there “too much Nelson” in there? That was one comment by a key player in the process, but if you are asking a Nelson for a Nelsonism, expect a full Nelson, or go ask Johnson or Jones, eh? Greg Bem’s book is to be published in Spring.

Another Spring release is Forty Days in the Wilderness Wandering an illustrated poetry collection by Megan Muthupandiyan, to be published by Finishing Line Press early 2021. My blurb was well-received:

The poetry of spiritual hunger and devotion is so rare in our 24/7 news cycle/social media age but just what we need at this chaotic Anthropocene moment. That Megan Muthupandiyan would recognize the retreat-like possibilities of the 2020 Covid lockdown demonstrates impeccable perception and priorities, but what’s most satisfying is to read these gorgeous poems of a fellow seeker who uses her tradition (& this moment in time) to move toward “the death of certainty” and to a resacralization of nature. May it be so.