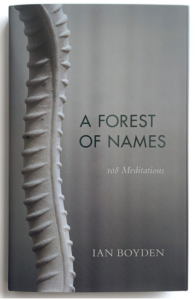 They are 108 poems that “illuminate a hidden landscape in the names of children killed in the 2008 Sichuan earthquake.” Many of their deaths could have been prevented if not for the shoddy construction of the school buildings in which they attended. The poems are inspired by an exhibit that Ai Weiwei created and an investigation he led in an effort to restore the names of the children who perished.

Of the author of this new book entitled A Forest of Names, Ai Weiwei said: “Ian Boyden is not just a poet— he is an artist, craftsman, translator and rebel.

And to call him the poet, or the author of A Forest of Names is a disservice, because these poems are translations of the names of the dead children and short meditations of those names. It is a project that could only have been undertaken by someone fluent in English and Chinese, fluent in the Buddhist tradition and also well-versed in the quality of empathy, so rare in our contemporary world and in contemporary poetry.

Your humble narrator caught up with Ian via Zoom on October 9, 2020, for our third interview together. One was with the late poet Sam Hamill and one was on San Juan Island about the Ai Weiwei exhibit.