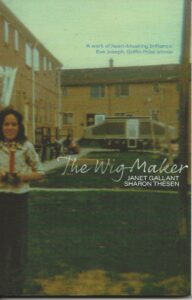 How the life story of a woman abandoned by her mother and abused as a child by her father was turned into experimental lyric poetry is the premise of a book by Janet Gallant as told to Sharon Thesen and published by New Star Books of Vancouver, BC. The Wig Maker is the book and that’s because a woman turned the events of her life into something that, if she could not forget, she could at least find a way to survive. Eventually, by making wigs. Janet Gallant is the mother of two grown daughters and currently working as a wig-maker in Lake Country, BC and The Wig Maker is her first book.

I conducted two interviews for this book. One with Janet Gallant on Tuesday, April 20, 2021 in which she talks about the process of writing the book with Sharon and about her own story.

An interview with Sharon Thesen conducted on Thursday, April 22, 2021, is presented below in two segments. In the first Sharon reads her poem The Fire, which was published in her book The Good Bacteria. She also discusses her feeling that serial form is perhaps the most open gesture in all of art. In segment two she talks about her role in The Wig Maker. How Janet survived and did more than her fair share of healing the bloodline is a remarkable tale. How Sharon’s poetry genius extracted the poetry from it is also remarkable as are Sharon’s thoughts about serial form and her own poem The Fire which gives you a sense of Lake Country B.C., and the perils it faces in the anthropocene.

I want the house clean
for the fire: to the greater
scourging I offer the lesser.

Last week we’d twirled
Mars to clarity inside
binoculars, discussed
its proximity, its palpable
redness. The likelihood
of “life,” what some weird-
looking worm or germ.

And this morning
the vacuum cleaner is travelling
along behind. I apologize

to a pillow, I can’t take you
dear, like throwing a maiden
off a cliff, well, not quite