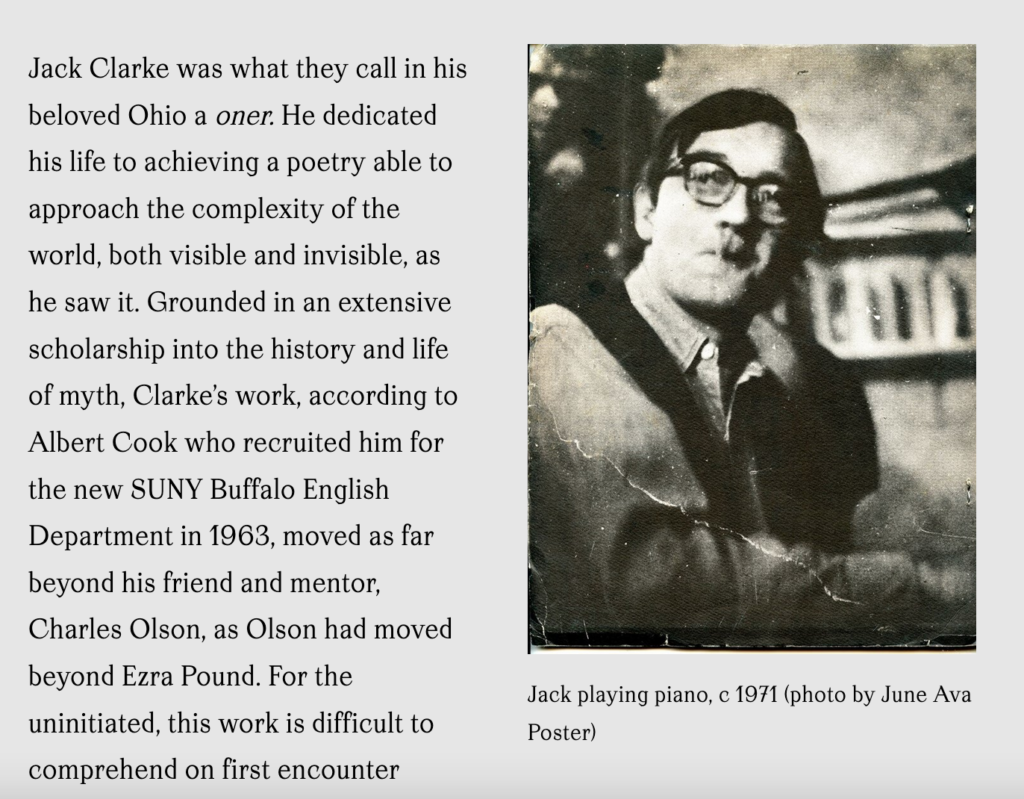 Michael Boughn is a brilliant poet who edited Robert Duncan’s mythical H.D. Book, studied with Robin Blaser and co-edited the dangerous website Dispatches from the Poetry Wars, now archived via Simon Fraser University, where Boughn studied. We caught up to him Monday, May 24, 2021 to talk about the late poet Jack Clarke. Michael created an introduction to Clarke’s work on the Caesura website and we discussed that and other things related to this badly neglected poet. My intro:

An introduction to a series of recordings of poems in the recent edition of Caesura Magazine says that the poet, Jack Clarke, who died in 1992, was: “Grounded in an extensive scholarship into the history and life of myth.” And his work, “according to Albert Cook who recruited him for the new SUNY Buffalo English Department in 1963, moved as far beyond his friend and mentor, Charles Olson, as Olson had moved beyond Ezra Pound.” (Clarke taught there for almost 30 years.) In addition, the introduction goes on to say, “William Blake gave Clarke his love and passion for myth, and his commitment to — as Blake urged — “create a system” rather than “be enslaved by another man’s… Clarke’s poetry is the site of deep thinking through myth toward an energetic cosmology.”

Michael Boughn was a student of Jack Clarke, is his literary executor and a fine poet in his own right and we catch up with him today via Zoom to talk about Jack Clarke’ his work and legacy and potential lessons for poets working now.