Organic in Cascadia: A Sequence of Energies

Organic in Cascadia: A Sequence of Energies
A presentation for UW Bothell Convergence on Poetics, September 30, 2012 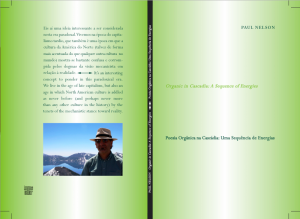 Use of term Organic, stems from its use in the early 60s correspondence of Robert Duncan and Denise Levertov. I use it interchangeably with Projective and use it because of the implications to/affinities with a shift in models from the materialistic (reductionist) to the organismic. Cascadia is this bioregion.

The theory that would serve as the philosophical underpinning of this approach is Whitehead’s Process Philosophy, though Hua-yen Buddhism (exemplified by The Jewel Net of Indra) also works well, as do many aspects of indigenous thought and cosmology.

That theory would have occasions of experience as the foundation of its explanation of how reality works. The poem is an occasion of experience, linked to past occasions and influencing future occasions. In the Hua-yen view, future occasions influence the present. This suggests field theory, as used in quantum physics (WCW and Olson alluded to this) and to the work of people like Rupert Sheldrake (morphogenetic fields). It also has parallels to animism and other modes of indigenous thought.

I came across an old essay by Sunn Shelley Wong, her Masters Thesis, done at Simon Fraser University. Robin Blaser, Roy Miki and Peter Quartermain served on her graduate committee. It had this great line: At every moment in a life or in a poem, the formal choice is between answering to that which is alive, or attempting to enslave it.

Organic predecessors include Whitman, Williams, Olson and those already mentioned. The title of this presentation is a nod to a Robin Blaser line in the forward to The Holy Forest, his life-long serial poem about the serial poem itself. The inherent spirituality suggested in different ways by these poets is critical to an understanding of what I see as the best way forward to make the poem, in Olson’s words, a high-energy construct. Humility, generosity and an ongoing sense of revelation (Oppen called for Noopoeia) are some qualities of such a poetry. Who’s Cascadia’s Lorine Niedecker? How translate power of mountains, glaciers, waterfalls, beaches &c into a high-energy construct?

Whitman’s Do I contradict myself notion (I am large, I contain multitudes) is a wonderful prophecy for such a poetics: multiple individuals

contending with multiple individual agents of consciousness operant in mind. (& Mind being understood as non-local.)

Williams use of the imagination (especially in Spring & All) as the entity engaged in such a practice of outside. Only the imagination is undeceived… the imagination freed from the handcuffs of ,, ,, art “ “ takes the lead… the inevitable flux of the seeing eye toward measuring itself by the world it inhabits can only result in himself crushing humiliation unless the individual raise to some approximate co-extension with the universe. This is possible by aid of the imagination. Only through the agency of this force can a man feel himself moved largely with the sympathetic pulses at work.

Of note: Olson referring to the single intelligence and the stance toward reality he implies (organismic) his recognition of the energetic force of humility and his likening of poetry that does not evoke that force – to sprawl. When most think of that word, sprawl, the word suburban usually goes before it, no offense to our Bothell hosts.

The Spicer/Blaser notion of the practice of outside and how Blaser’s practice could be described as a new way of entering the holiness of the everyday. (Charles Bernstein.) 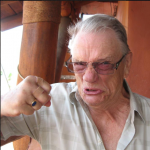 Bowering tells kids to “get out of my field!”

It is clear to me a way forward IS that approach, the serial poem, and key practitioners for me are Blaser, Nate Mackey, Michael McClure, Jose Kozer, Joanne Kyger, George Stanley, Daphne Marlatt, Brenda Hillman, Anne Waldman, Wanda Coleman and George Bowering. It is no accident that all but one of these are West Coast writers, two of the five are in the region some call Cascadia, one of the rest with formative years spent here. The serial poem, as it unveils the sequences of moments, the trail of entelechy. Not so much as transcendence as much as it is intensification of the moment. Mackey: Serial form lends itself to andoumboulous liminality, the draft unassured extension knows itself to be. Provisional, ongoing … moving forward and backward both, repeatedly…

If the organismic is closer to what reality is than other methods (and this can be contested, but it’s my suspicion) than the serial poem, a life-long dedication to the poem as revelation of content (Levertov) seems to me to be its highest manifestation in poetry.

Cascadia’s proximity to Asia and its debt to Asian wisdom cultures more so than European ones (as Rexroth knew about the West Coast 70 years ago) along with the notion that indigenous cultures here were not totally obliterated (Coastal Salish art as one example, described as the most celebrated art from any of the world’s hunter/gatherer cultures) suggest that the field here is fertile for such a gesture which builds on what these poets have done.