Tuesday, October 7, I was almost set for starting the literary portion of my writing retreat. (For my first post on the rainforest writing retreat, click here.) Side trips to the Elwha Dam removal project, Chief Seattle’s grave and the Elwha Rez (to see the mouth of the river) were part of the incubation for me. Rainforest Hostel proprietor Joe Conomos was beginning to develop a certain level of comfort with me and me with him on my second day there.

Seeing his poster for Ehren Watada and his Democracy Now bumper sticker made me wonder how his “Lefty Politics” went over in clear cut country. He said he does not make a big deal out of his politics and there are folks that share a similar sentiment in the Forks area. I had caught part of the previous day’s Democracy Now broadcast on World Indigenous Day and I think that opened up a window for Jim to be more at ease with me.

He also had informed me that there were chores to be done. This is part of the hostel’s ethos and I have done chores at other hostels as well. If it helps keep the rate at $10 to $20, bring it on. He did. Day one had me help him move some 2 x 4s around. Chores day two, three and four involved helping him in his effort to build a greenhouse next to the garage. Jim told me that he was making it from all salvaged materials: cedar timbers that had been on the property for 20 years, windows donated and some material taken from the salvage of the valley’s oldest house. 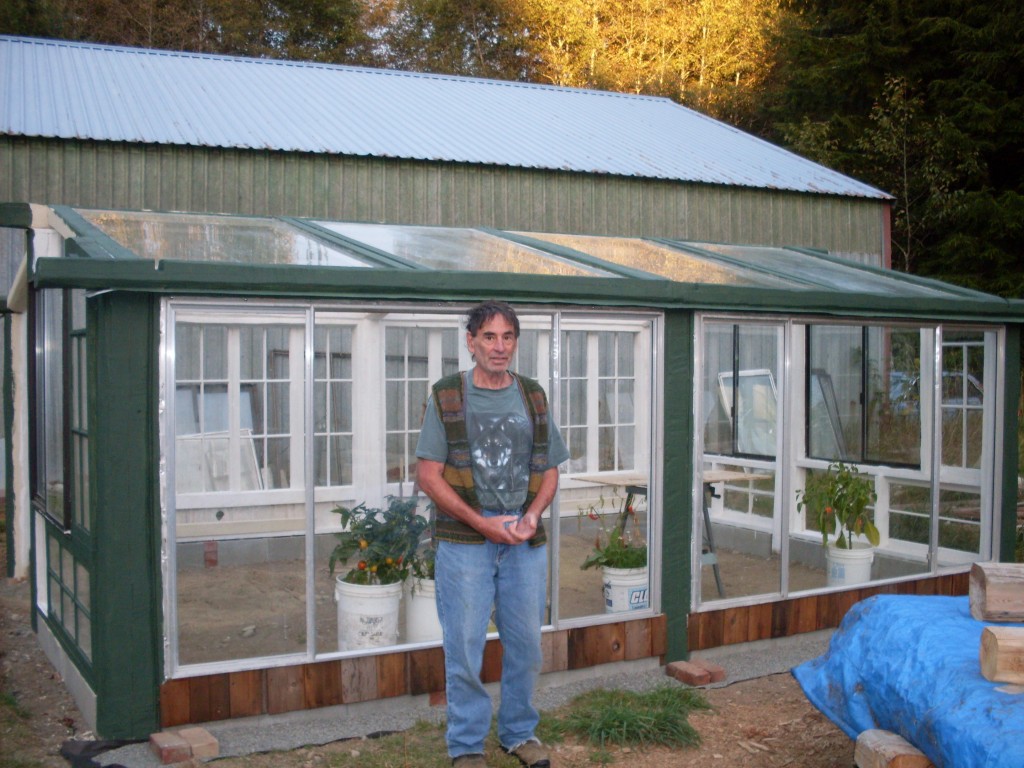 Well, I had to tell him that this greenhouse was beautiful. His whole ethos of providing a low-cost retreat for folks to experience the rainforest, making a greenhouse out of salvaged materials and watching him commune with a couple of resident ravens was quite inspiring.

With the first of my chores done, I headed into Forks to finish the Duncan book (Ambassador From Venus) and get some lunch. On my way to Forks, I just had to stop when I saw a sign for the World’s Largest Western Cedar named, of all things The Duncan Cedar! I turned off the road and followed the long series of turns, some on gravel roads, to the sign and the tree. 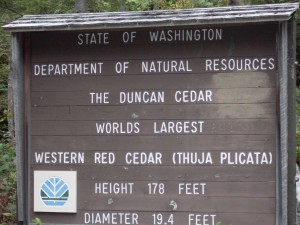 Before I saw the sign, I saw the tree and was stunned. It was like a ghost tree. It looked, at first site, like the world’s largest cedar snag and was a little spooky. As I approached the sign and then the tree, I saw that someone had scratched something into the sign about how the tree would not be dying if other trees around there were not being cut down, something like trees need a family. That it was scratched into the sign was rather shitty, I thought. Perhaps a sign stuck to the wooden sign, but I get the intent and it did make me think. Here is my best shot of the Duncan Cedar. 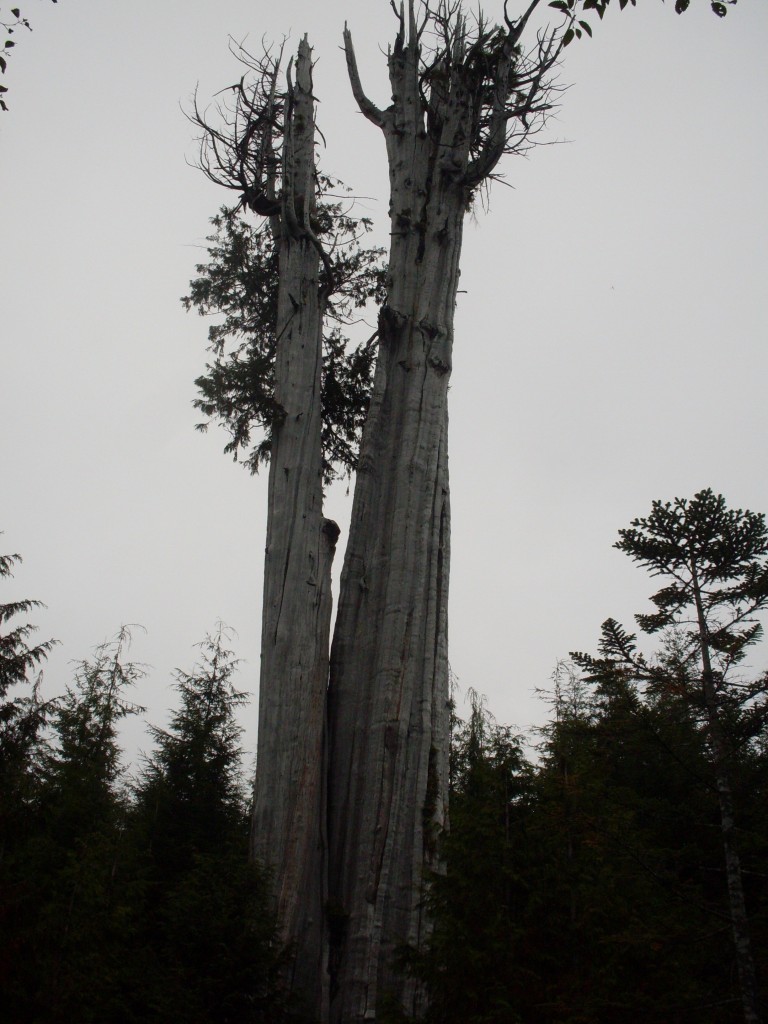 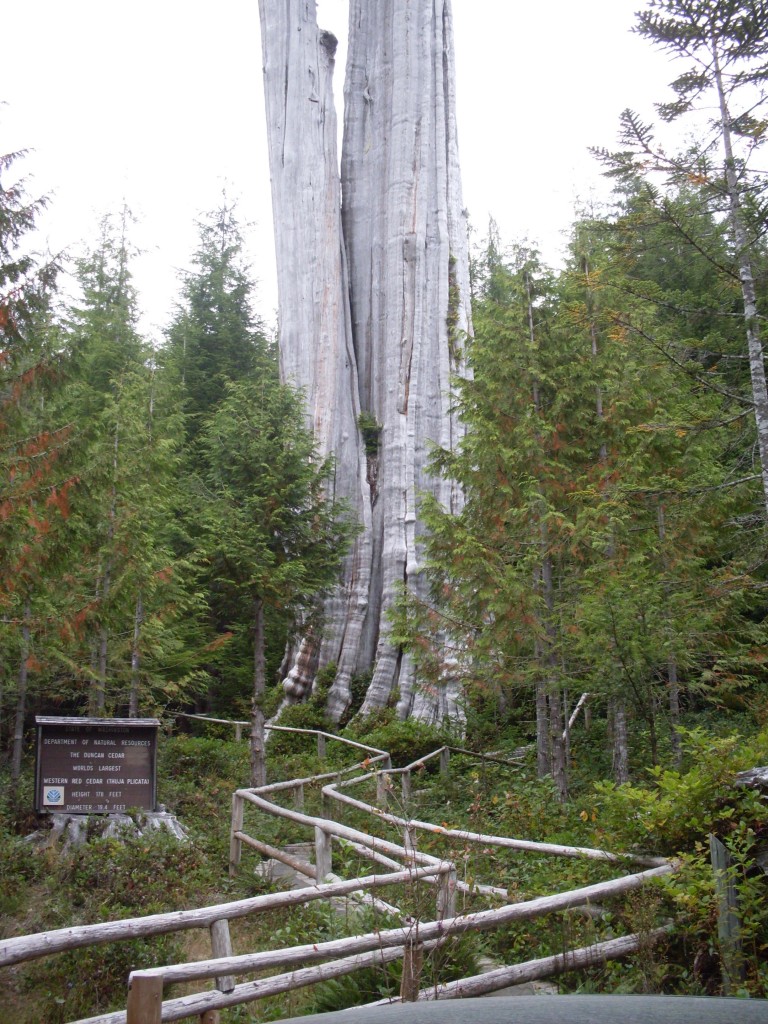 On to Forks for a latte and reading. There are a couple of espresso huts in Forks, but I wanted to sit, read the Duncan book and check email. The Hostel has very good cellphone reception for T-Mobile, but no wifi. (In fact, they have dial-up!)

Cafe Paix looked perfect but, unfortunately, they were closed. Across the street was a place called Sweet Stuffs. I went in and asked if they had espresso and yes, they did. No soy milk. I ordered a latte and the cashier turned to the woman at her side and said: “Do you remember how to do this?” Oh boy. Well, it turned out just fine and I stayed for maybe two hours, getting only one concerned look and at least one friendly hello. Of course, I looked like this, so can you blame them?

I went for lunch at a Chinese restaurant called the Golden Gate and had the Mongolian tofu. It was done in a black bean sauce and was very good. I talked to the owner and his wife and they were interested in my 2011 visit to China. I went back the next day for lunch again.

It was there I finished the Duncan book and soon after, headed south toward the Rainforest Hostel. I actually went past the hostel about four miles and decided to watch the sunset at Ruby Beach. I would do this on two consecutive days, stunned by the sea stacks and stacking a few stones myself. 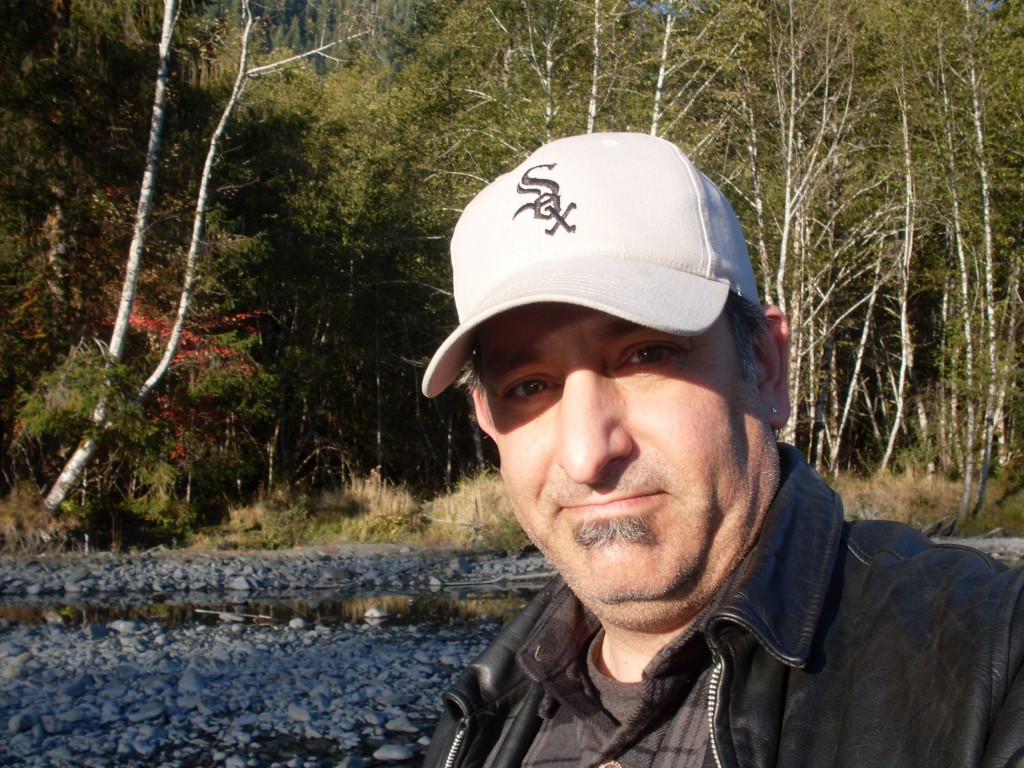 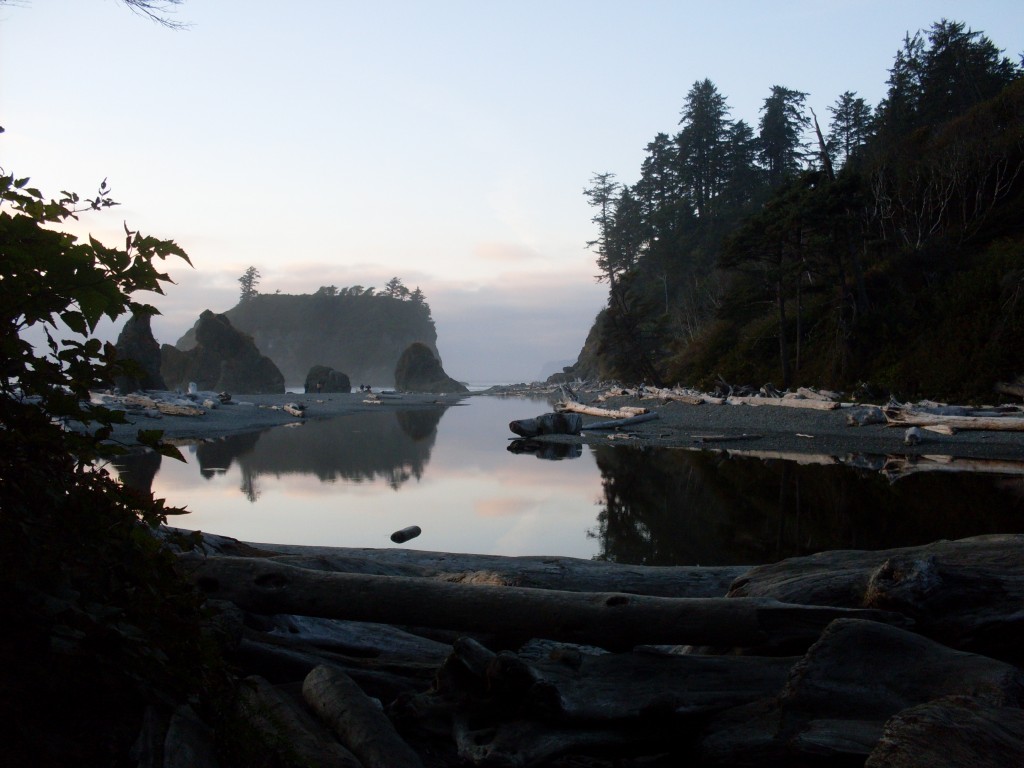 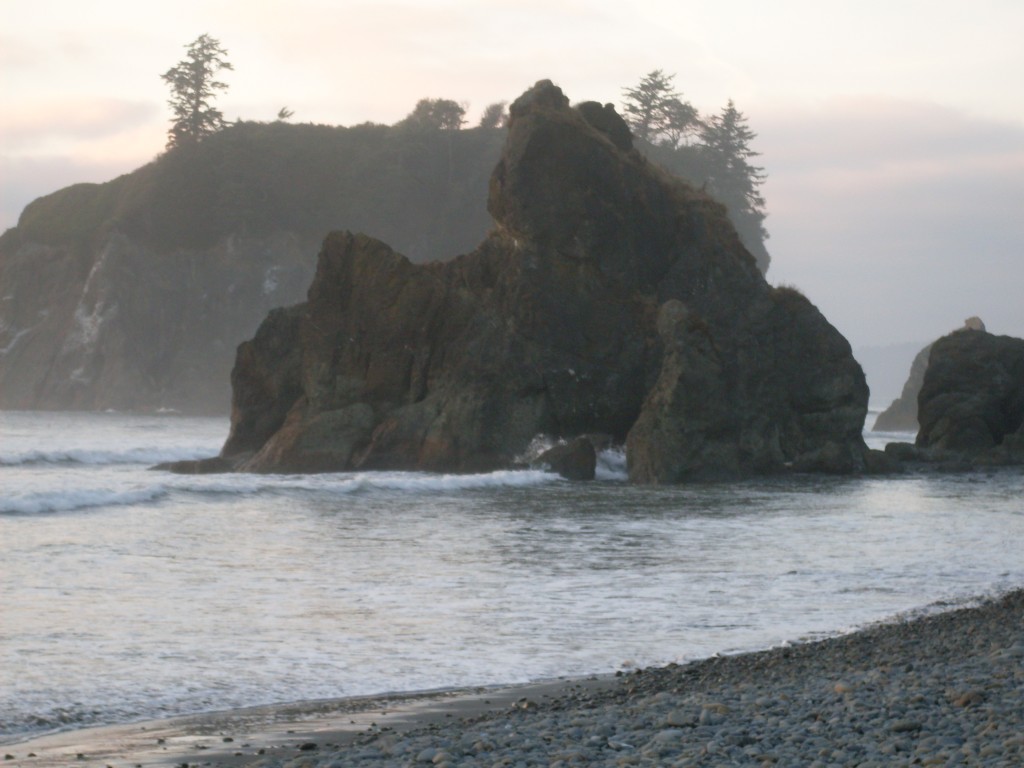 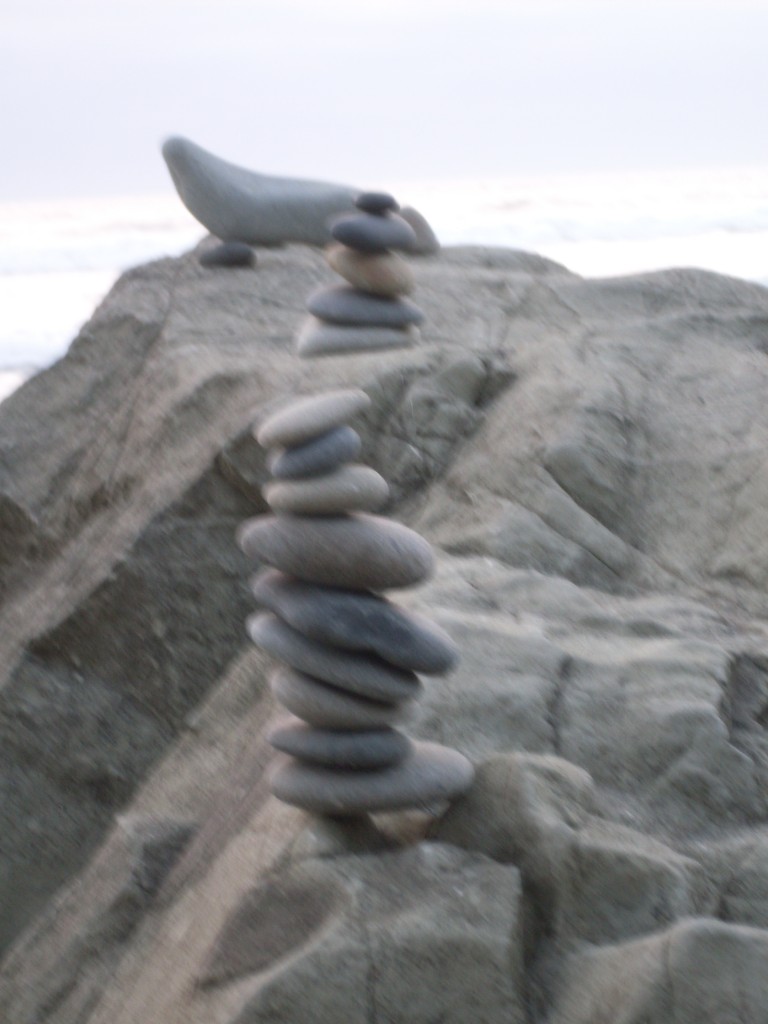 Sea Stacks have to start somewhere! 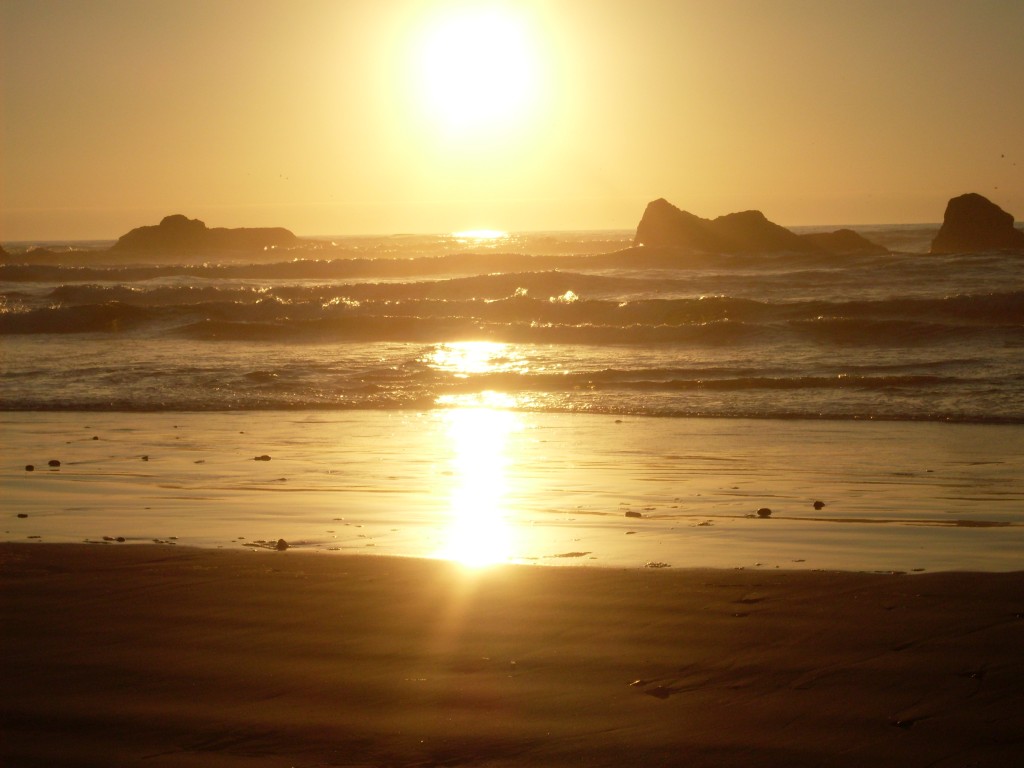 Sunset out of the way and a new writing space in which to work, I was set to start digging into my notes in Ambassador From Venus. Here is how I started:

NOTES ON AMBASSADOR FROM VENUS

Robert Duncan is one of the most important poets in terms of my own poetry lineage. He was the first poetry teacher of Michael McClure, my main influence. His poetics clarified the notion of Field Poetry, which I have found fascinating and very useful in explaining my own practice, having developed a spontaneous mode before reading Duncan and his essays. And the long-awaited Duncan biography by the fine poet Lisa Jarnot (Robert Duncan: The Ambassador from Venus) sheds additional light on what I think made Duncan so important; on his stance toward poem- making and how to live the life of a poet.

For the uninitiated, Duncan was born in Oakland, California in 1919, orphaned, adopted by a Theosophist family and was one of the leading figures in the vibrant Bay Area poetry scene from the 40s up to his death in 1988. An openly gay man since the 1940s, his knowledge of the history of poetry, linguistics and other arts forms (especially painting and music) continues to be an inspiration for many poets around the world. The bulk of his work remains very fresh and innovative, eternal. His notion of the serial poem, (for which he took credit) and the dual threads of it (Passages, The Structure of Rime) intertwining, is fascinating. Poems such as My Mother Would Be a Falconress and Structure of Rime XXV (The Fire Master) are among the best examples of projective verse.

The Fire Master waits always for me to recall him from a
place in my heart that is burnd or is burning. He comes to my
mind where, immediate to the thought of him, his rimes flicker
and would blaze forth and take over.

You too are a flame then and my soul quickening in your
gaze a draft upward carrying the flame of you. From this bed
of a language in compression, life now is fuel, anthracite from
whose hardness the years spring…

Reading the book then, for me, would be a glimpse at the man behind the poems and the poetics and hopefully give me more clues for my own search. I look for confirmations, clarifications and corrections to help my own practice move forward. I have found that by focusing on innovative poets like Duncan, their messages never go out of style. Projective or Organic composition (as Duncan called it in his correspondence with Denise Levertov) may have gone out of fashion with the advent of deconstructionism and the LANGUAGE poetry movement, so I can imagine folks reading this and disagreeing with my notions of the innovative, but it’s what I am betting my life on and is the stance that informs this essay. Not so much an essay but a listing of some of the more notable points from the book based on my first reading.

Duncan was not much interested in transcendence but, rather, in the intensification of the moment (xix).

To me this stance suggests many things. Duncan was an avid reader of Alfred North Whitehead, whose philosophy suggests that the basic elements of the universe are occasions of experience. It suggests a Buddhist sense of mindfulness, though Duncan was not a Buddhist and went out of his way to point that out during visits to to teach at that first Buddhist institution of higher learning in the west, Naropa University. It also explains in part why his praxis had soul-building properties…

After several hours of composing my review/essay on the Duncan book, I settled in to have tea and listen to the baseball playoffs on my phone, pulling for the Orioles and the Nationals. (Argh!) I made a trip to the Hoh Rainforest and stopped to reacquaint myself with the Hoh River. I’ve backpacked along the river, going past the High Hoh Bridge on three different occasions. 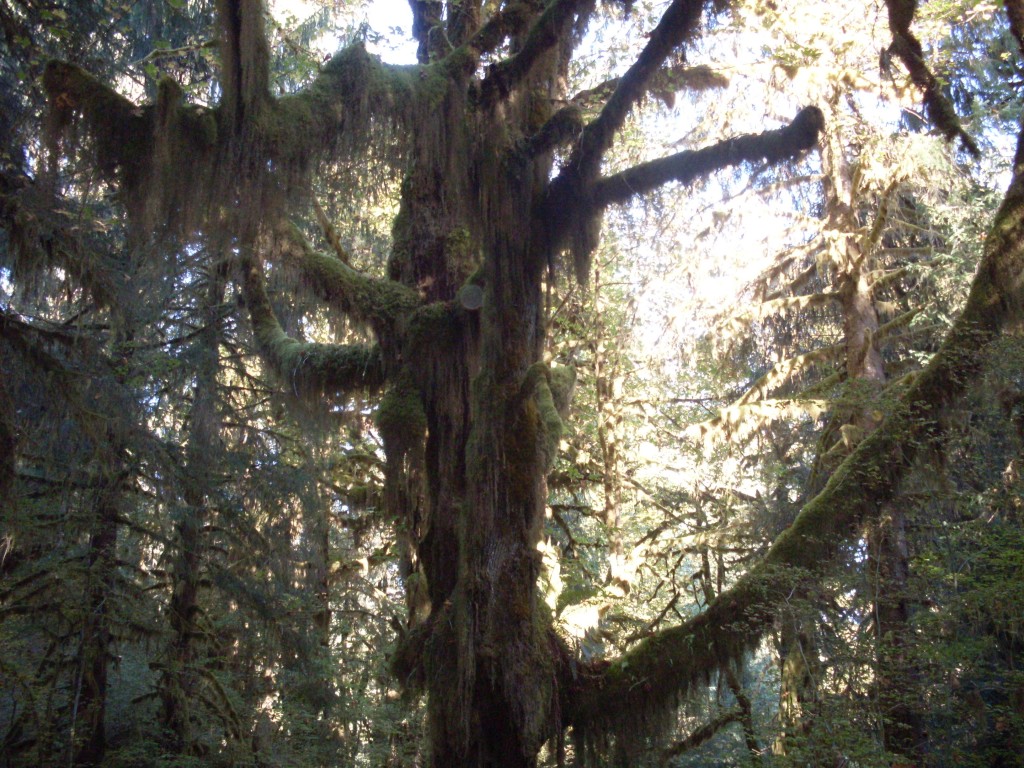 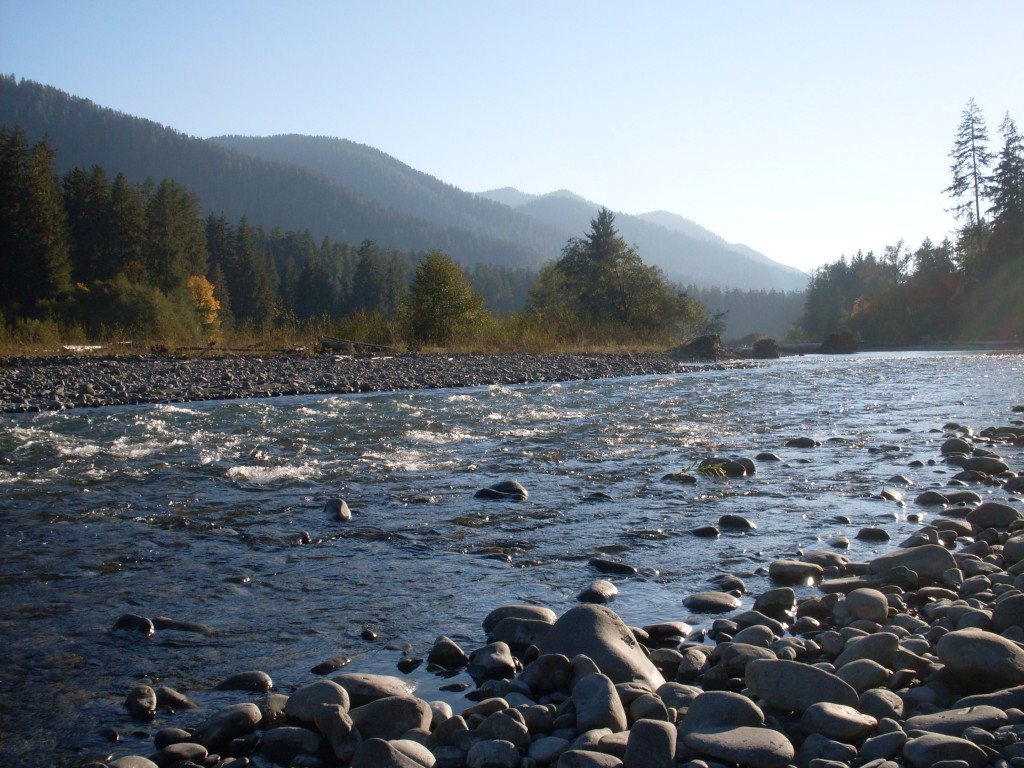 I also recorded a quick video of the last summer-like day of 2012. I wrote several poems, including one directly based on my reading of the Duncan book: 71. The Ambassador from Bakersfield. I was delighted to see that Duncan did a series of lectures on Field Theory as a Poetics, which I have been tracking organically without the knowledge that Duncan was on it, though I was not surprised. I am attempting to get a transcript of his 1983 lectures on the subject, or at least a copy of the tape.

I told Jim I would return to the Rainforest Hostel. Hopefully he will share more of his homemade yogurt or whatever fermented delicacies he has the next time I get there.