It’s one of those moments that you remember forever. Sam Hamill wanted to show me something in his home that he knew I would appreciate. He carefully lifted up an object about three feet high and 10 inches or so wide. The front appeared to be fossilized maple and on it said the word “Habitations.” Each black page in the book was an original painting, with the lines of Sam’s poetry etched by laser into the black:

He dragged from the river
an ancient cedar log,
half-petrified,
and used it to bind
a book. From shark-tooth, cuttlefish
and fossilized ear-bone of whale,
pigments for ink;
from stone, the soul
of stone, earth from earth,
transformed, transfixed—
from thistle and feather,
a made thing,
and yet it is an organism,
it has a life. 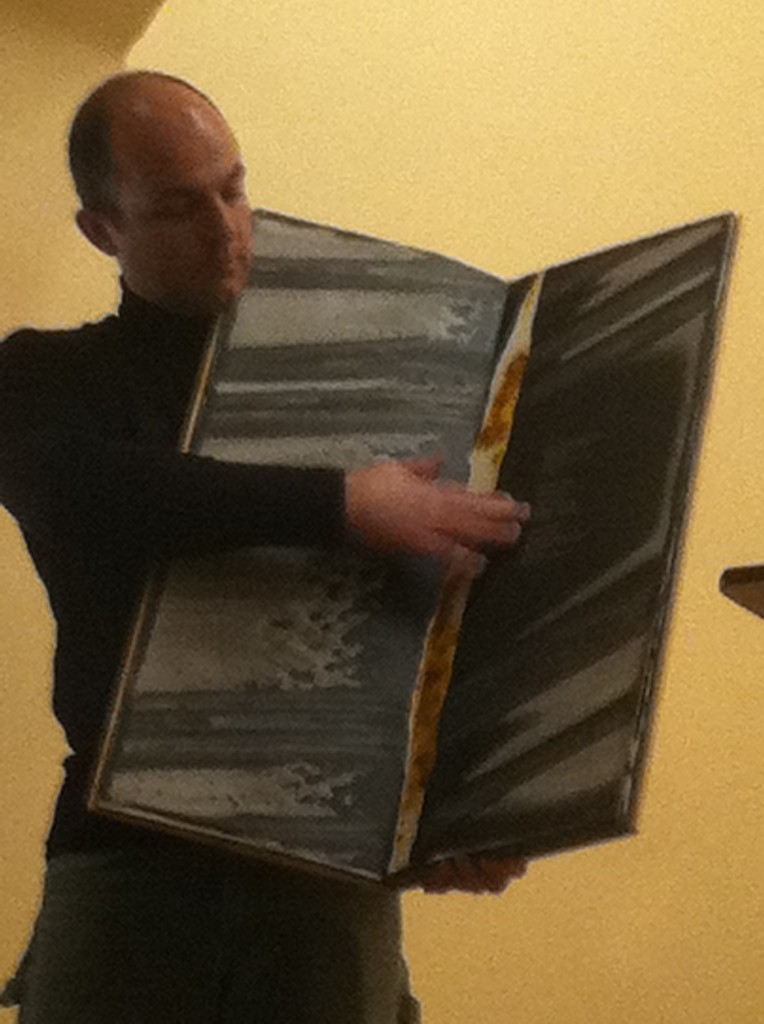 If it was true, that this remarkable $10,000 book/work of art was an organism and had a life, I at least wanted to be its friend. The collaboration, the poem and the latest chapbook by Sam Hamill is the subject of our interview today with the Founding Editor of Copper Canyon Press and author of more than forty volumes of poetry, essays, and celebrated translations from ancient Chinese, Japanese, Greek, Latin, and Estonian. Border Songs published by Word Palace Press is the chapbook.

Ian Boyden is an artist and writer currently working in the Blue Mountains southeast of Walla Walla, Washington. His practice in paintings and books, displays a fundamental drive to link the literary, material, and visual imagination. He makes his own paints and inks from unusual materials such as meteorites, shark teeth, and freshwater pearls. His work has been exhibited widely and is found in many public collections including Reed College, the Portland Art Museum, the Victoria & Albert Museum, and the Suzhou Museum. Website: https://ianboyden.com/

This event is supported by SICA, the Subud International Cultural Association. 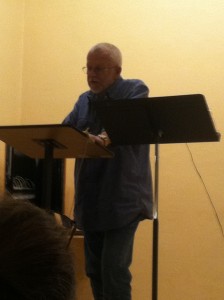 Ian Boyden will give a presentation of the two artist books he’s made with Sam: Habitations and Edible Earth. He’ll talk about the ways these books came to be, ideas that coalesced in their making, his contributions to the projects as an artist and bookmaker, and some thoughts about collaboration. Sam Hamill will read from his new chapbook Border Songs published by Word Palace Press (www.wordpalacepress.com) and, perhaps, from Habitations. This event is presented by SPLAB in association with SICA, the Subud International Cultural Association.

For Esteban Moore
Sometimes I like to read
the poets of the borderlands,
some in English, some to wrestle
slowly from their native tongue,
my scant Spanish failing at each turn,
the gists and piths of poetry.

There are images, there are tones,
that cross the rivers
of time and space and cultural bounds
to touch the heart of one
who struggles in the journey.
Poetry is made from flesh and bone.

What is a nation, what is our song,
and what is a man, a woman, but
a tear and a smile, un abrazo fuerte
por favor, tender and temporal,
wine in the cup, a song in the ear,
when the struggle itself is everything.

It is what we know and what
we have to work with—bare hands,
dreams that restore
big hungry hearts and minds
made whole by what we share:
mi pane, mi agua, mi canto amor.

Children of the Marketplace

They come out of nowhere, the sad-eyed
pleading children of the streets, they come
bearing shoplifted socks, small notebooks,
pens, anything, even just a card that pleads
for change, a peso so they can eat.

From our lunch spot under the grand
acacia trees, we say, “No, gracias,” wondering
if a coin encourages thievery or whether
any of them will ever learn to read.
Or we make a gift of some small change
when one rushes to open the door
of a cab we’ve flagged. “No, gracias,”
to the old woman selling wilting roses
on the street, wondering what life
has she whose children learned to pick
a pocket, to moan for some relief
in a world without regrets, a world of need.

We watch a pregnant girl drag her heavy cart
through busy traffic on the street,
sorting through the trash—salvaging
old cardboard, plastic bottles, a board,
a brick, old newsprint, almost anything
that ordinary trash provides. Her work
is hard, her face a mask of grief
the marketplace can’t hide.

In Seattle’s Pioneer Square, it’s a wrinkled face
asking for a dollar for the newspaper
of the homeless, news of that other marketplace
where human life, degraded or self-abused,
comes cheap, and dignity and hope
are long forgotten dreams.

It’s the same in Caracas, Mumbai,
New York City or Saigon. The world is one.
Who knows what’s wrong or right,
whose coin will go for suicidal wine
and whose for mercy in a shelter for the night?
The young, the old, for them there is
no sense of time, no past remembered,
no thought of what tomorrow brings.
The marketplace is full of things.

I wake suddenly, in the middle of the night,
and realize I’m stroking the pillow beside me,
dreaming of my wife who is six months dead.

I rise and brush my teeth and pour a stiff drink
and go out into the garden to sit
on the old iron bench and think.

It’s after midnight and the moon is almost full.
And after a long silence, I hear, faintly,
a woman’s heels’ chink, chink, chink,

against the ancient cobblestone
beyond the garden wall
as she makes her way down the street.

An interview with Sam Hamill which first aired on August 25, 2002, is linked here.