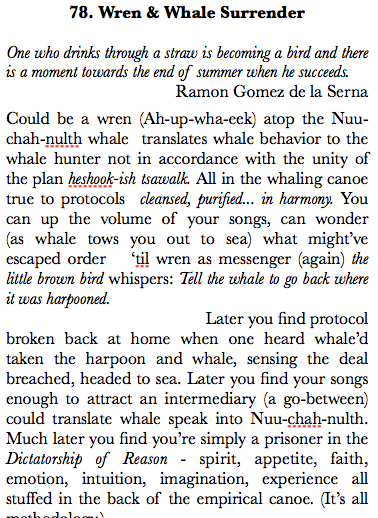 78 in a series of 99 neo-barroco haibun written after Ramón Gomez de la Serna. This one inspired by E. Richard Atleo’s book Tsawalk: A Nuu-chah-nulth Worldview. The holistic way of thinking seems to be so natural in my own thought, yet I know there is much that has addled my way of being in the world thanks to the industry-generated-culture in which I live. Just existing in it requires some level of facility and, in many ways, that is antithetical to the kind of unity and interconnectedness I sense in the Tsawalk approach.

I feel very fortunate to have interviewed Richard Atleo and, as always, welcome your thoughts about this poem.

2 Responses to 78. Wren and Whale Surrender