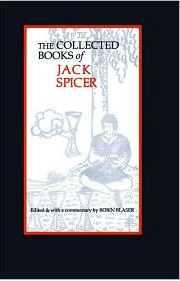 Am reading The Practice of Outside again, again from the Collected Jack Spicer so I can see what notes I made the first time I read it. (It has since been published in Robin Blaser’s Collected Essays The Fire.) So much more is available to me now, which is a good feeling. You’ll see a couple of quotes from the essay that stood out after my second reading (which is not yet complete, so dense the essay is.) One of them, that Spicer/Blaser’s way of writing was an attack on the whole “subjective aim and assurance of a whole culture” is a stunning reminder of the power of this writing and its inherent anarchist politics. Really, quite revolutionary, which resonates quite deeply with me, as you’ll see with the sharp subject change when the references to Bradley Manning are made using terminology from Julian Assange’s notion of the U.S. being on trial, not Manning. Indeed. Credible accounts of history are not written by the victors (or scholars) of war. This is why the subject interests me so. In any event, Haibun #88 of 99 from the series Haibun de la Serna. (Audio here.)