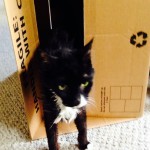 As you may have read, my beloved cat Zappa died last Sunday (3.30.14) and Peter Munro said the next night we’d hoist one in his memory at our 5th Monday EasySpeak gathering, which we did. I did a Control F search in my latest American Sentences manuscript and found 28 poems that mention a cat. Sure, some of them are not about Zappa, but about Tupelo, Meredith’s cat. One is a found poem about a cat (& their legendary healing qualities) and one is really about my oldest daughter Rebecca who, though not a cat, felt that Zappa was her furry little brother. So, in honor of the memory of Zappa (the cat, not the guitarist/composer) here are some American Cat Sentences written over my 14 years of daily practice:

1.02.01 – Alternating oil massage, we decide against greasing up the cat.

9.08.07 – Good thing I cleaned the kitchen floor shiny target on which the cat could urp.

3.4.09 – Something inside me wants to beat this cat until he learns to love me.