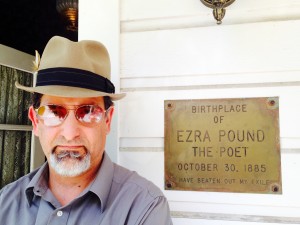 Mer and I recently returned from a mammoth road trip from Seattle to Minneapolis, Chicago, DC, Pittsburgh, Decatur, Indiana, Chicago, Minneapolis, Sutherland, Nebraska, Denver, Laramie and Hailey, Idaho. Since we have taken the I-90 route to the Twin Cities, Chicago and back, I wanted to try something different and visit the Clyfford Still Museum in Denver and the birthplace of Ezra Pound in Hailey, Idaho.

Pound essentially invented literary modernism, was charged with treason for his WWII radio broadcasts that were in support of the Axis powers and his life work The Cantos is seen as one of the most significant achievements of Modernism. The theme of usury in the work demonstrates the prophetic nature of Pound’s focus and is quite relevant to these days in which we’re seeing the death throes of capitalism. And his lines: “What thou lovest well remains. The rest is dross. What thou lov’st well shall not be reft from thee. What thou lov’st well is thy true heritage” gave me solace after my Father’s recent death. 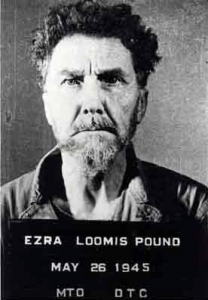 As it happens, a firestorm would emerge over another controversial Hailey homeboy as we were getting ready to drive there. Sergeant Bowe Bergdahl was born in Idaho and grew up there and called Hailey his home. A young man who volunteered for the US Army, he was stationed in Afghanistan in the “war on terror.” Apparently disillusioned with the aims of this war,  the civilian casualties and the arrogance his saw in US Army, he left his post,  was captured by the Taliban and spent five years in captivity. He was released May 31, 2014, in exchange for five Taliban members who were being held without charges in the U.S. gulag on occupied territory in Guantanamo, Cuba.

The Bergdahl case has been a difficult one for Republicans committed to opposing anything proposed by President Obama. That they criticized Obama for “leaving a man behind” only to “flip-flop” en masse when the prisoner swap was announced is typical of a morally bankrupt approach to what we might have called “governance” in the not too distant past. For Meredith to be watching CNN in the hotel dining room while they were reporting two blocks down Main Street in Hailey was an odd experience for her. 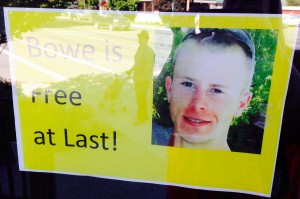 The welcome-home celebration planned by the Hailey community was canceled after threats were made to the local Chamber of Commerce. The local police said they only have 17 officers and a planned demonstration of 2,000, right-wing activists was enough to call off the event. We loved seeing the yellow ribbons and other signs of support for Sergeant Bergdahl and resonated with the notion of having compassion for someone who was held captive, tortured in captivity and had what appears to be a revelation about the horrors being committed in our name.

The Pound house was beautiful and restored to a condition that seems to be much like what it might have looked like in 1885, when Pound was born there. He only lived in Hailey for 18 months before his family moved to Pennsylvania, where he would later attend the University of Pennsylvania and meet William Carlos Williams and Hilda Doolittle (H.D.) and prepare the ground for a much-needed move away from the excesses of Romanticism, which had grown clichéd and stale by 1912. I was delighted to see an old news account of Lawrence Ferlinghetti visiting the house years ago and Mer helped me recreate a moment from that. 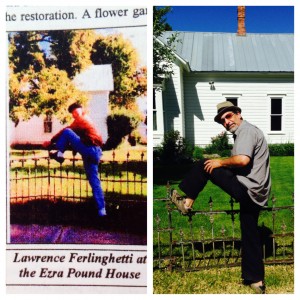 Pound’s radio broadcasts and his anti-semitism (which he later recanted and referred to as a “stupid suburban prejudice”) are hurdles (or excuses) for people to reject him or his work, but his contribution to literature is gigantic and his work, incredibly relevant and prophetic. That he was born in Cascadia is another one of those little magic discoveries that suggests that my cultural investigation is being guided by forces beyond my control, always a good sign.

And if indeed Sergeant Bowe Bergdahl is a war resistor, as seems to be the case, his re-entry to the “land of the free” may be more complicated than one could ever possibly expect. It’s bad enough he was held against his will in a strange country far from home. Now he must deal with the ire of the USAmerican Taliban, some of whom have wondered out loud if he should be executed. When Morris Berman writes that the U.S. has lost its moral center, I have no rebuttal.

And so I try to keep educated. I read well-written articles about the history of U.S. war deserters, such as this article: https://www.thenation.com/blog/180144/bowe-bergdahl-and-honorable-history-war-deserters and am reminded that Richard Nixon started the well-poisoning. That he got into Congress as a “red-baiter” is also something to remember.

Keeping one’s own moral center in a country that violently opposes that action is no small feat at this time. The practice of poetry for millennia has served to deepen that quest and the industry-generated culture, which attacks anything which is ultimately human, also supports mediocrity in the name of “poetry.” In no small part we have the combination of our own government and the culture of materialism to blame for that. See: https://chronicle.com/article/How-Iowa-Flattened-Literature/144531/

Mer, Ella and I will return to Hailey. We loved the Power House half bicycle shop/half bar and grill. We loved the way the mountains are so close and loom just outside the quaint Main Street. The local coffee house was wonderful and baked their own goods. That the locals tolerated the smarmy Fox News reporter who tried to impress them with lines like “I was sent here from New York” is a testament to their courtesy. That they are stunned by the Right Wing U.S. Taliban reaction to this event is a testament to their withdrawal from the sickness of the U.S. corporate media and those who let that poisonous material control what they think.

It’s clear we need more independent thinkers in this world. It seems that Hailey, Idaho, is a good place to visit if you aspire to be one.