It was quite a melange of cultures in Puebla during the 14th Subud World Congress August 1-17, 2014. (See my previous posts here and here.) To give you some sense of how diverse the event was, these lines went into a postcard poem written while in Puebla:

One of the most remarkable happenings was a healing session I had with an acupuncturist and osteopath who has created a healing modality he refers to as “ontological kinesiology.” It is a combination of muscle testing and mudras that scientifically determine the source of one’s issues that manifest as physical ailments. I’ve received as many as ten treatments over the 12 or so years that I have known this man and have never experienced a healing process that worked on such a deep level. I am not a fan of allopathic medicine and prefer to find root causes of all my chronic aches and pains. This is what is called a “radical” stance, to affect change at the root level, and I would certainly qualify as a radical when it comes to the nature of wellness. 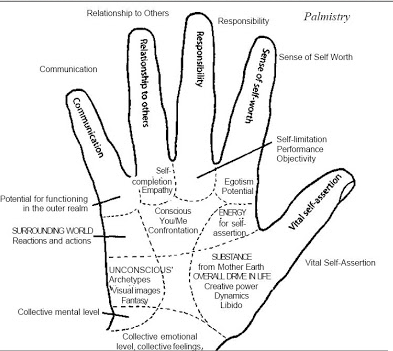 As you can see by the graphic, mudras have been known to have deep significance to those who have understood the mind/body connection. The Subud spiritual practice of Latihan helps deepen one’s knowledge of how the body reflects certain states, attitudes and thought patterns and long-time practitioners develop a shorthand for this connection depending on what physical sensations are engaged in Latihan, or in testing for a fellow Subud member who requests such assistance from those known as Helpers. (I have been a local helper for three years at Subud Greater Seattle.)

While I am not going into the specifics of that session, we were able to trace certain ailments to about the time I was ten years old and the relief is palpable. It is reflected in my face and countenance, according to those who know me well and last saw me before I left for Puebla. And while the session ended prematurely, we were able to pick up in the Latihan hall and do testing and find relief at that very deep level, a level unprecedented in my 52 years.

Aside from personal growth and relief from long-standing personal maladies, I was most engaged in SICA events. SICA is the cultural wing of the Subud world association and learning about the Subud take on culture has been quite a validating process. I have always been able to suss when poets (& other artists) are merely regurgitating an ethos slapped onto them by their lack of individuation and by the blank slate which swallows whole the imprint of the industry-generated-culture and I have hungered for more. In Subud, real culture comes from the jiwa (soul) and is tapped into what Charles Olson would call “the single intelligence.” That SICA’s mission is to exist: “at the intersection of creativity and spirituality” is something that resonates quite deeply with my own interests and experience.

Three SICA events brought together some of the brightest and most inventive minds for panels under the banner of the Conversation Cafe, called: “The Future of…” One was The Future of Design. Victor Margolin is a Professor Emeritus of Design History at the University of Illinois – Chicago. He helped conceive of the idea and moderated that event and others.

Victor Margolin’s statement for the Future of Design workshop was: 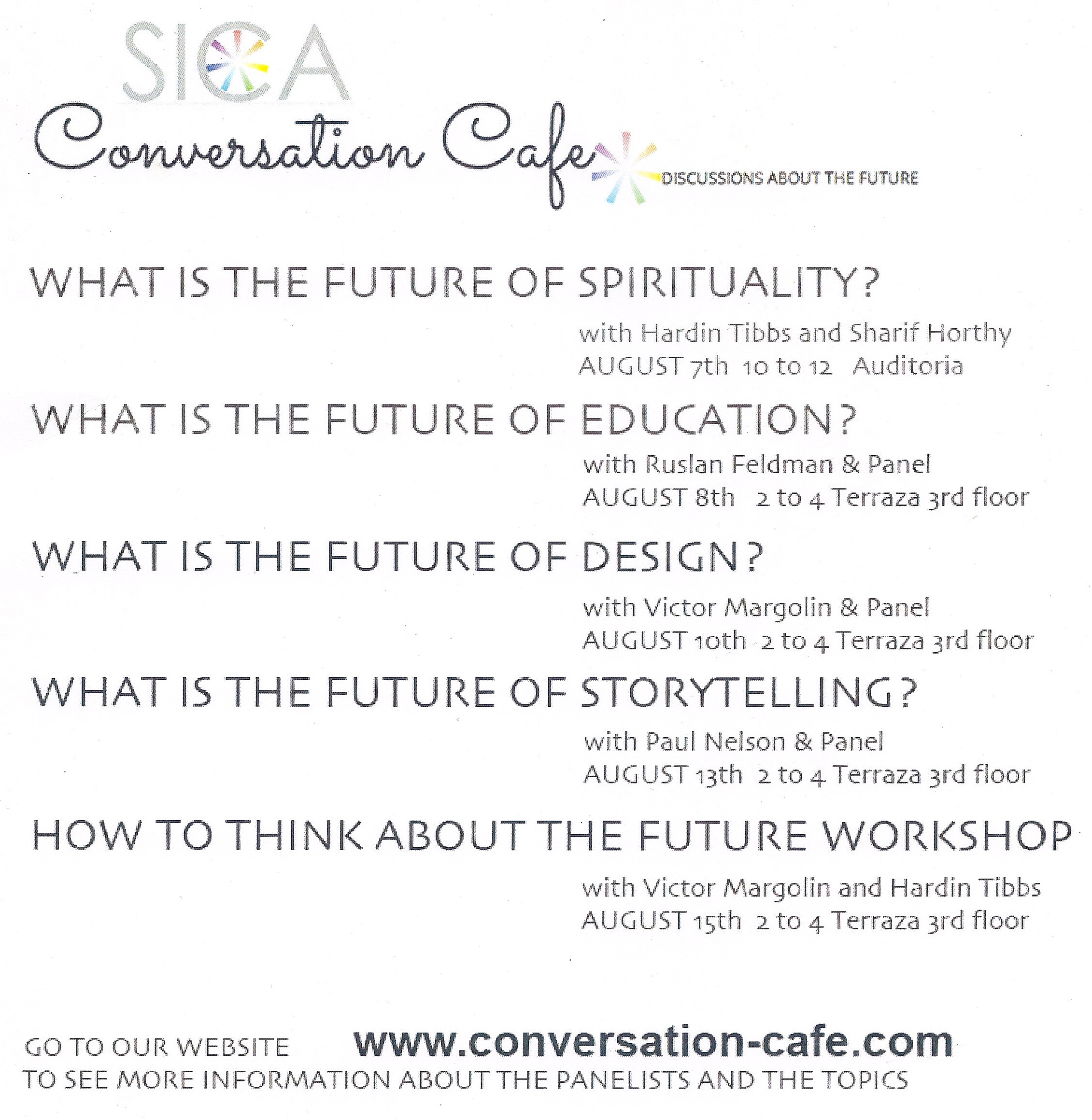 Design is undergoing a multitude of changes at present. On the one hand both the public and designers are considering new forms of activity and new situations that can be designed. These range from government institutions to hurricane disaster relief programs. On the other hand, there are new proposals for more open design processes, both in terms of making design plans for new products available as open source material as well as involving more people in the design process, particularly when the object of design is a social system or activity. In the realm of traditional product design, new materials that are at the same time lighter and more durable are available as is new technology such as 3-D printing which has the potential to revolutionize the way people acquire objects. Victor Margolin will discuss some of these new tendencies and then a group of panelists will give their own responses to the new design situation before the conversation is opened to others who have come to listen and participate.

And the panelists present were: Arifin Graham, a Victoria, BC, graphic designer who brought a bit of Cascadia with him in the form of a Salish tale about the hummingbird;  Garrett Thompson, a designer and philosopher who discussed the need for new concepts that would challenge the notion of states (Nations) and Susannah Rosenthal, who was a toy designer for over 15 years and who had the notion of the Conversation Cafe and suggested it to Victor and I during the Subud National Congress in Pittsburgh last May. One final panelist was a Mexican designer German Montalvo, and friend of Victor’s who had some remarkably inventive postcards: 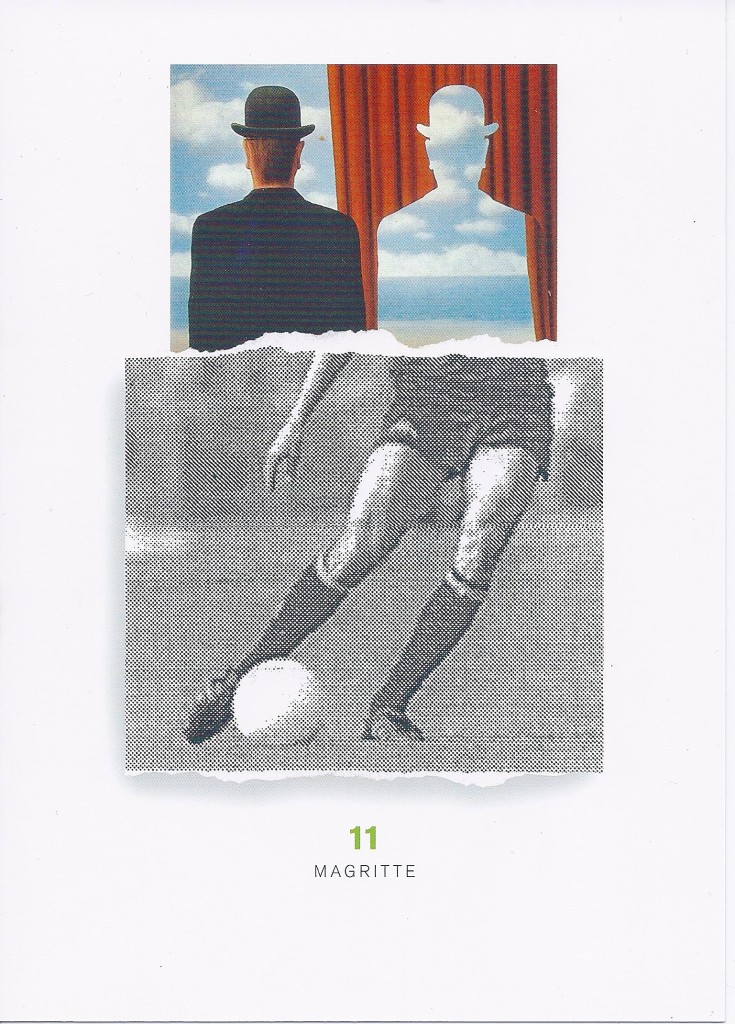 In the breakout discussions, I suggested we needed new design for capitalism and followed up Garrett Thompson’s notion of reconsidering nation states with my own emphasis on bioregionalism, as evidenced by all my Cascadia preoccupations. It was a lively event and set the foundation for my own panel on The Future of Storytelling.

We also had a remarkable panel which, oddly, featured four filmmakers and one poet. (Your humble narrator.) Matthew Cooke, Honora Foah, Mimi Machado-Luces and Myrna Jelman all had salient angles on the topic. The event was filmed and I hope to add the Youtube url here soon. I was moderator and provided the initial notes for the panel:

In an age of unprecedented instability, with the climate system and capitalism showing signs of breakdown, how to we navigate the challenges inherent in life today? What is the story of our age?

The poet/prophet William Blake knew that luminous details are at the core of all true storytelling and the internet and its capacity for spreading the news virally around the planet make our time potent for narratives that ring true with our massive economic disparity, issues of violence, race, gender and orientation and ecological uncertainty.

A panel of five artists who all approach narrative from widely different perspectives will give a short talk and discuss how they see the ancient art of storytelling evolving to communicate something deeper than the industry-generated culture to meet the deep needs of 21st century dwellers.

And the “one page” which I provided and from which I made my case for the Future of Storytelling:

The Future of Storytelling

There will always be a need to tell the story. – John Lavine

John Lavine was the Dean of Northwestern University’s Medill School of Journalism when I asked him about the future of a business that had daily newspapers folding daily. I mean going-out-of-business folding, not folding in half so you can carry it around. But what will the future of storytelling look like? Here are some possibilities I have been betting on for decades.

Poetry. Not just poetry, but that which builds on the great movements of the last 100+ years, Modernism and Postmodernism. A form that is Open (as Subud members, this ought to be music to our ears) and the most open of all the poetry created in the last 50 years is the Serial Poem. Poet Robin Blaser allied with Jack Spicer in the 50s called the serial poem: “a narrative of the spirit.” William Carlos Williams believes that each poem should sum up the poet’s life up to that point. A kind of process that lets the outside in. That is, a process which understands the limitations of the human mind and can go outside of the composing poet’s frame of reference. That the poem have a kind of consciousness that even surprises the one writing it is a sign that the line between self and Self has been breached, a good sign if what’s tapped is benevolent. A spiritual practice aids this effort. Few art forms expose so bare the inner content of one’s life like the Serial Poem. Other current practitioners include Daphne Marlatt, Fred Wah, Barry McKinnon, George Bowering and Peter Culley, all Canadians and Sam Hamill, Nate Mackey and Brenda Hillman. Those poems that also reenact history are, in my view, especially potent at this time, given that news has become entertainment and history all too often written by the victors. Runner up to the Serial Poem as current future method of telling the story would be sound poetry, which is performative and transcends language. Transcending cultural borders, of which language is one, is a huge factor and will continue to grow in significant as people look to those connections we have with others who do not share a common language. Poetry (& other art) that is multi-lingual is part of the future of storytelling. Multi-genre as well.

Interviews. The art of the interview is undervalued. For those with an a commitment to their own individuation, how the inner content in each individual develops is a fascinating thing to witness. Interviews, whether done via video, audio or written word, are a undervalued method to reveal that development, as media focuses on athletes, celebrities and scandals. That the best interviewers steep themselves in the work of their subjects, that they get some sense of the mythic dimensions of each subject, facilitate a space for allowing openness and use the time/energy of the subject in the best way, are all factors influencing the quality of interviews. More than an hour of spontaneous reaction to even the subject of one’s own work seems to be the limit. After that the quality diminishes. Mirroring is one technique that good interviewers use to bring out the best of each subject.

There were about 60 people, maybe more, in attendance for the panel I hosted and I felt the panel was very successful and very lively. I also attended the Future of the Future and was delighted to see such concepts as the “sharing” economy, Uber X, Airbnb and other such initiatives noted as one shape which the future may take. My hope is that other Subud communities will stage such discussions so that seeds may be planted to move our species through the numerous crises we face on this planet.

1 Response to Ontological Kinesiology in Puebla