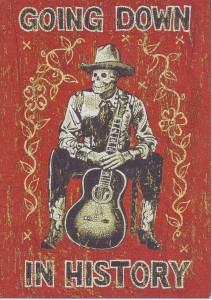 First an update on the 2015 August Poetry Postcard Fest. We have 70 signups in the first 44 hours and the first two groups are complete. Lists have been sent out to groups 1 & 2.

As soon as 32 get into a group, I am compiling the list of poetry postcard participant addresses and sending the list out to the participants in that group. The countdown clock on the main fest webpage now counts down the end of the signup period, but now that we are back to groups of 32, that is less of a concern for the early signups. Again, the main page for the fest is: https://paulenelson.com/august-poetry-postcard-fest/

Now the musing on independence. I did not plan for the fest call to go out on July 4, Independence Day in the U.S., but that it worked out that way is one of those happy coincidences and a manifestation of the open. When I interviewed Allen Ginsberg in 1994, he spoke of Open Form in North American poetry.  Interviewing Michael McClure the following year and hearing him talk about Projective Verse was another huge opening for me, not just in poetry, but as a student of consciousness.

And it is the combination of a seeker’s nature and a poetry practice that includes spontaneity and phenomenology (rich imagery and “noticing what you notice”) that has led me to where I am today. It is no surprise that I’d be attracted to the open. I had an open stance as a baseball and softball batter, started my study of Open Form in 1994 upon meeting Ginsberg and my spiritual community uses the word “opened” to denote someone who has been initiated into the practice that is engaged by members. A practice that is completely spontaneous and involves surrender to the divine life force. Yet when one is surrendered in this way, just as one is surrendered to the content dictated by the poem as it is being written, is one truly free. Writing this way, not even being sure of meaning sometimes, but surrendered to the sound, imagery or any other guiding principle as one composes, is a liberating feeling. It should be exhilarating. George Bowering says it succinctly when he speaks on happiness:

When a poem has you in its grip, you have to shut up all your usual yapping and listen as hard as you can. If it continues to work, and nothing interrupts it, you will get to be the first reader of the poem. It will be a happy event. Poets are not the only people to know happiness, of course. But I think that one principle operates in poetry and elsewhere – happiness is speechless. If you could describe your happiness, you would only corrode it. If you’re happy and you know it, clap your hands. When a baseball player who has just arrived at second after hitting a double claps his hands, he is not applauding himself. He is responding to his good luck. Happy and lucky have always been synonyms, haven’t they?

So, another year comes when I wish for people to experience the exhilaration of spontaneous composition while building community. And there is a postcard anthology being planned, perhaps for Spring 2017, and a series of readings to accompany that event. Use the fest to your advantage. See the techniques and past essays linked under the main postcard page navigation header and tell friends about the fest. We have about three weeks before the signup closes and I want to be a resource for people wanting to have this experience. Most of all, have fun.